In the 2022 AMA Supercross series’ first of two 250SX East-West Showdowns, the Lawrence brothers put in an impressive and emotional performance, with Hunter topping the main event and Jett recovering from an early crash to finish third. Shortly thereafter, CRF450R-mounted Chase Sexton finished a strong third in the premier division despite a time-robbing fall. 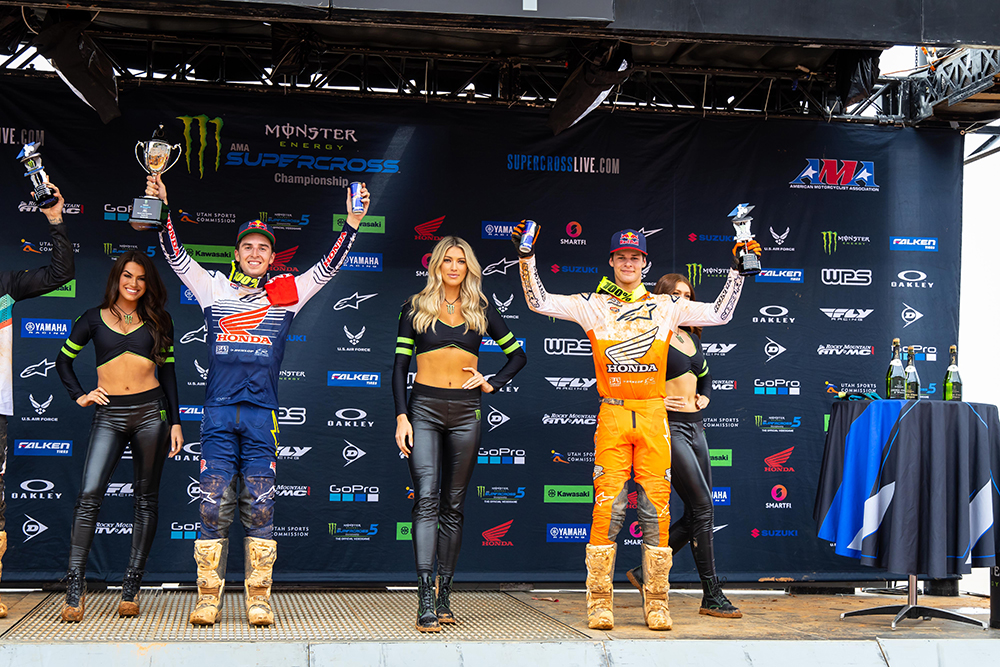 Both Lawrence brothers enjoyed strong starts, and they had their CRF250Rs running near the front on the first lap. Jett then lost his front end after a whoop section and went down, remounting in 15th. Hunter dogged the leading Jo Shimoda until passing him in the sand section on lap 4. Christian Craig also moved by Shimoda and pursued Hunter for much of the race, but the Australian held off his West Region title rival to notch an emotional win. Meanwhile, Jett had mounted an incredible charge through the pack that landed him in a third position with two laps remaining, and the brothers celebrated their shared podium finishes with nose-to-nose burnouts on the Atlanta Motor Speedway asphalt. 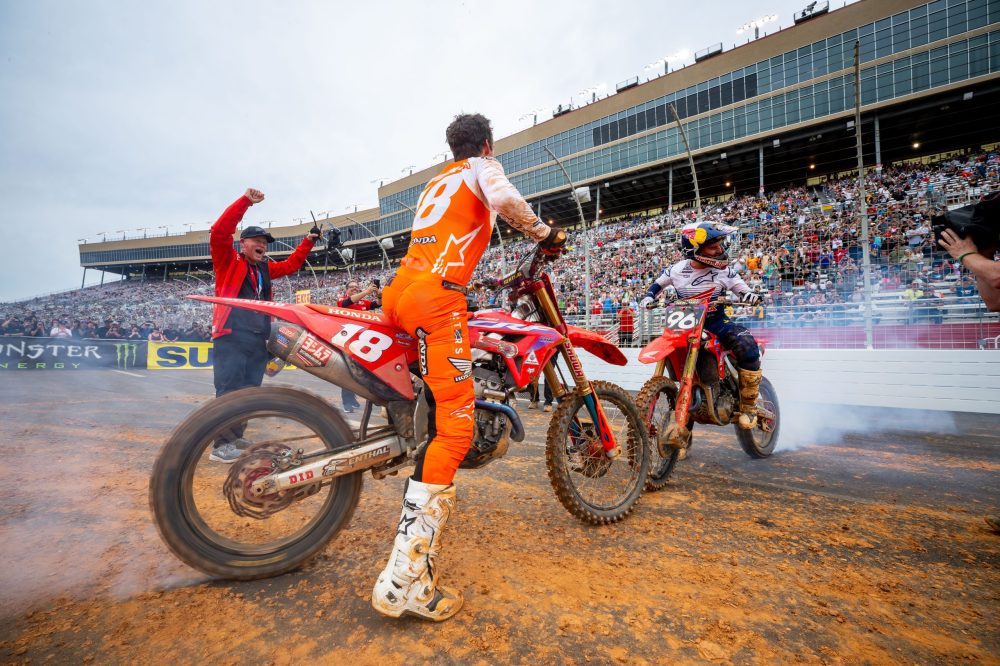 Sexton emerged second from turn 1 in the 450SX main event, then got by the leading Justin Barcia in a rhythm section on lap 2. Unfortunately, the subsequent lap saw him fall in a turn after the sand whoops, and he had dropped to sixth place by the time he rejoined the race. Turning the fastest lap times of anyone, the 22-year-old worked his way forward, moving into a podium position with two laps remaining and staying there to the end. 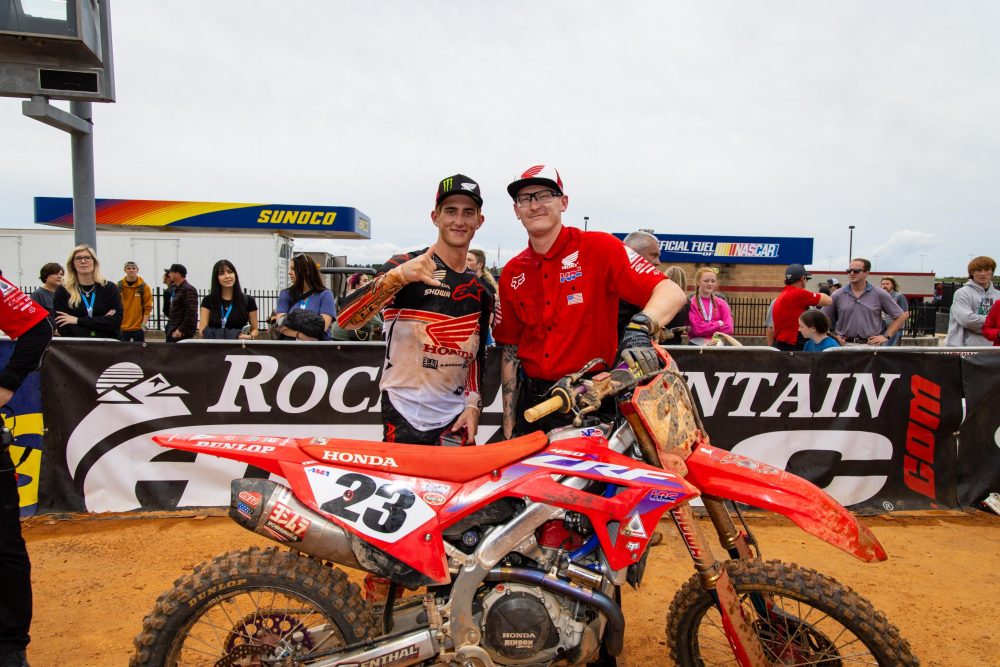 “Any time you win is cool, so East-West is really good. Everyone has been hearing about the East-West deal – who’s going to win, this and that – but it’s not really anything new that you have to change your approach for; you just have to race. I did my best in qualifying, but I live for the night show. I got a good start and took it from there. Jett’s on the box as well, which is so awesome for our family – we’re in the best place we’ve ever been. Our work ethic is second to none, and the team we have around us now is unbelievable – every one of our guys that we work with. It’s cool, and we’re having fun. This is what we train for, and I’m so stoked to pull it off.” 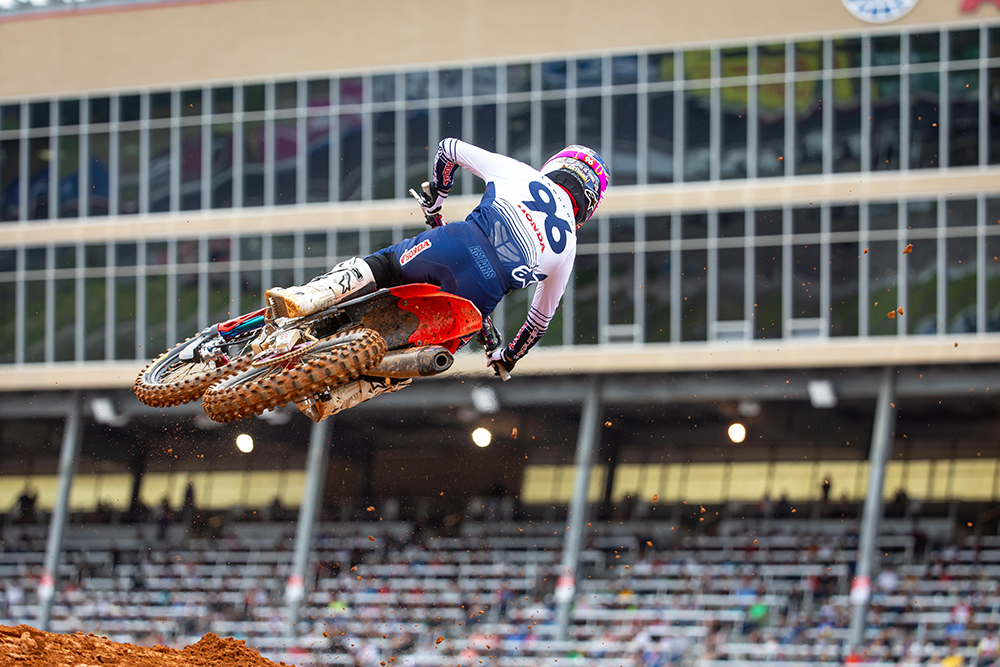 “The biggest thing today was the traction, because it was obviously pretty muddy in the qualifiers. It was kind of just seeing what the traction was going to be like – when it was going to be tacky and grippy – and I found out those spots where it wasn’t tacky at all. It is what it is, and you can’t really throw your hands up; you have to get back on your bike, put your head down, your bum up and keep charging. I feel like days like today are a good test of my mental side, to see how I’m building from previous races, and it’s a well-deserved podium. I was definitely cheering inside my helmet when I seen Hunter was P1, and I was just thinking, ‘Be smart Hunter, and bring it on home.’ It’s nice that we got 1 and 3.” 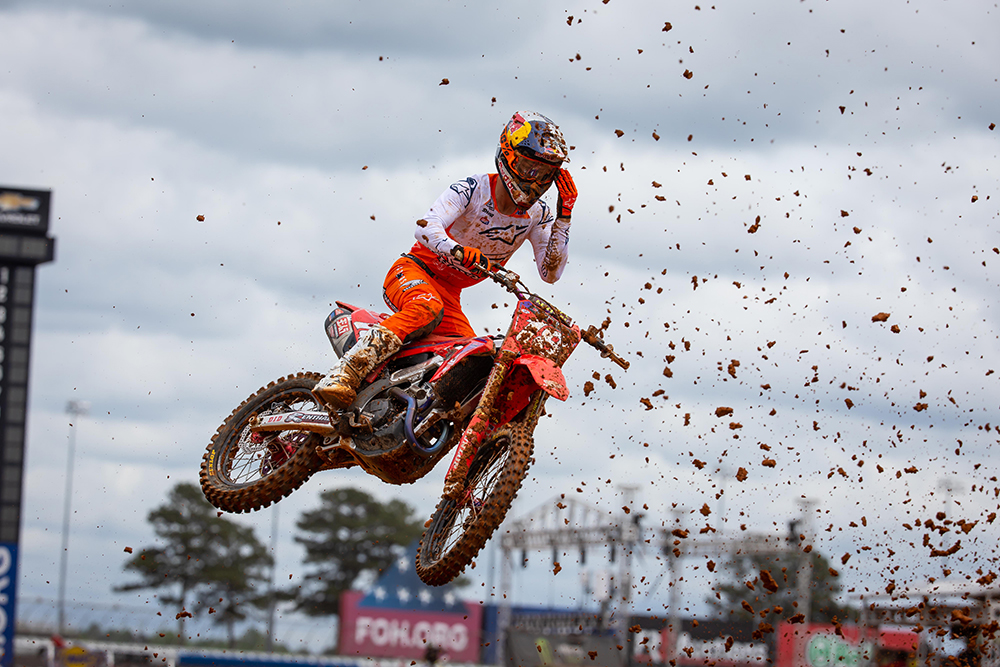 “It was a really good showing for us, overall. It was special because it was kind of a home race since we had a lot of people here from Honda in Alpharetta, as well as some of our HRC representatives from Japan. We were super-fast in practice, with Chase and Jett being fastest. The heat races didn’t go so well for the 250 boys, but Chase absolutely dominated his with what may be the best ride I’ve ever seen him ride. For the 250 main event, unfortunately Jett had that tip-over, but they both had good starts. Hunter had Christian [Craig] giving him pressure and was still able to win, and Jett made it all the way back to the podium from a crash. In the 450 class, Chase started great and was pulling away, and although he had a tip-over, it was really cool to see him come back to the podium. It would’ve been really nice to get that win for Chase, but everyone’s really happy to come from where we were a few weeks ago.” 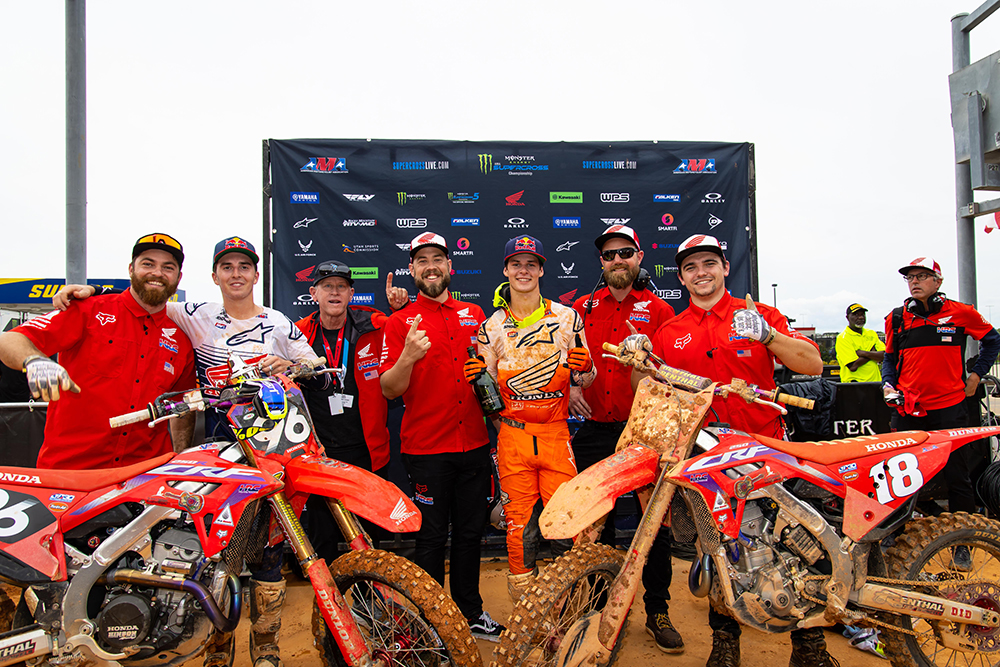