As 2020 has passed from spring to autumn, we’ve learnt to take nothing as a given. Take the health of the sport’s biggest and best, for example. Valentino Rossi (Monster Energy Yamaha) was absent here in light of Covid-19’s highest-profile MotoGP casualty, meaning no premier class champions were present on a premier class grid for the first time in 21 years.

In his absence, there were further upsets. Sunday’s race consisted of a three-way fight for honours, just with none of the three pre-race favourites present. The Ecstar Suzukis of Alex Rins and Joan Mir flew, while Alex Marquez (Repsol Honda) produced his second astounding ride in seven days. All while pole-sitter Fabio Quartararo (Petronas SRT Yamaha) dropped down and through the field, his front tyre pressure soaring and opening the championship up to a host of new names in the process.

Saturday was the Frenchman’s day as he recovered from an ugly high-side in FP3 to steal a stunning late pole. Front row qualifier Cal Crutchlow (LCR Honda) aside, Yamaha locked out the top positions, with Maverick Viñales (Monster Energy Yamaha) and Franco Morbidelli (Petronas SRT Yamaha) showing the best pace of all.

But Suzuki has been happy to upset the Yamaha party more than once this year. Rins produced his most complete MotoGP performance to date, rising from tenth to fourth on the first lap, picking off each of the three Yamahas in quick succession before holding his nerve as October revelation Marquez applied a spell of sustained late pressure on the back of his own rise through the field. 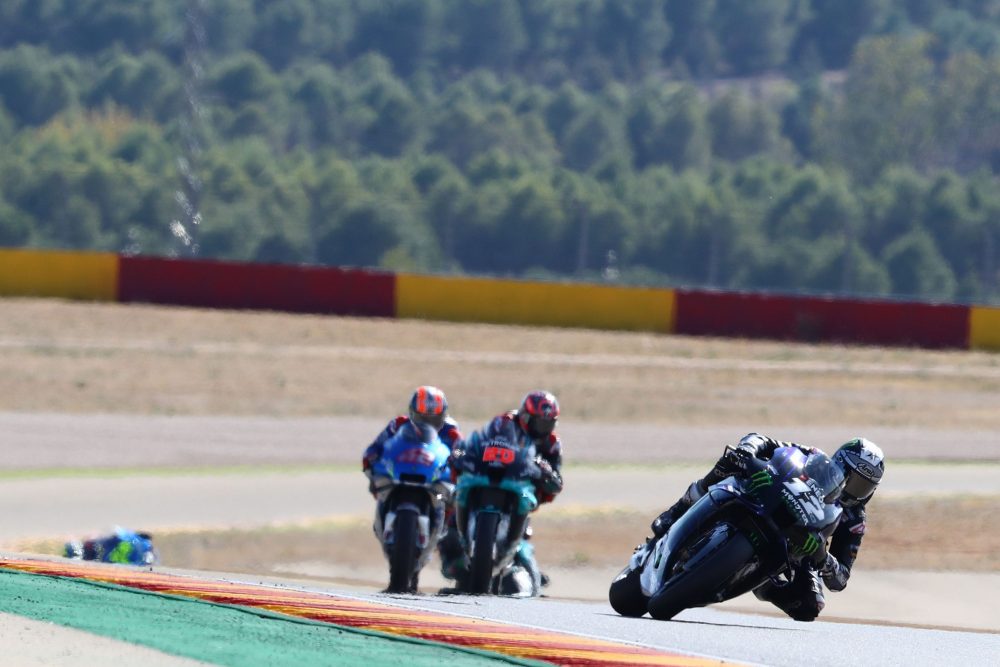 No bike can manage tyre life like the Suzuki GSX-RR. And Rins’ own delicate throttle control was crucial here, as he made Michelin’s soft front and rear compounds last for all 23 laps. Hopes of a late title push may be overly optimistic. Yet this was vindication the 24-year old. He has not only looked on as his younger team-mate grabbed the plaudits through most of the year, but persevered through great pain, a result of the fracture-dislocation of his right shoulder in July.

Come Sunday evening, the numbers spoke for themselves: Rins’ race time was 2.8s quicker than Marc Marquez’s dominant performance here a year ago. He also led home the second closest top ten (and second closest top 15) in premier class history. It got even better for the boys in blue, In Mir, Suzuki now has a rider leading the premier class championship for the first time in 20 years thanks to his third place. Eight winners in as many races; only in 2016 has MotoGP experienced variation like this.

Not for the first time, Yamaha was left to ponder how it got away. The cooler conditions in free practice saw them dominate. But the schedule, delayed by one hour because of near freezing morning temperatures, meant the track was 31 degrees for the 15:00 start – comfortably the hottest of the weekend. Tyre choice was a gamble. Viñales went for the softest compound on the front and rear, the Petronas SRT Yamahas fitted the medium front. Suzuki went soft-soft while the 2020 Ducatis felt the medium-medium and Marquez medium-soft.

It all started so well. Viñales shot under Morbidelli on the exit of turn one and enjoyed his best opening lap of the year, opening up a 0.7s lead in just 5.1km. Quartararo was past his team-mate on lap two, making it an early Yamaha clean sweep, surely a sign of things to come.

But Rins had fired his own early warning. The Spaniard passed six riders in the first three turns to sit fourth with Mir taking three laps to get by Jack Miller (Pramac Ducati) to sit fifth. Fresh from his Le Mans masterclass, Marquez was seventh, looking far from out of place in a good scrap with Andrea Dovizioso (Ducati Team). 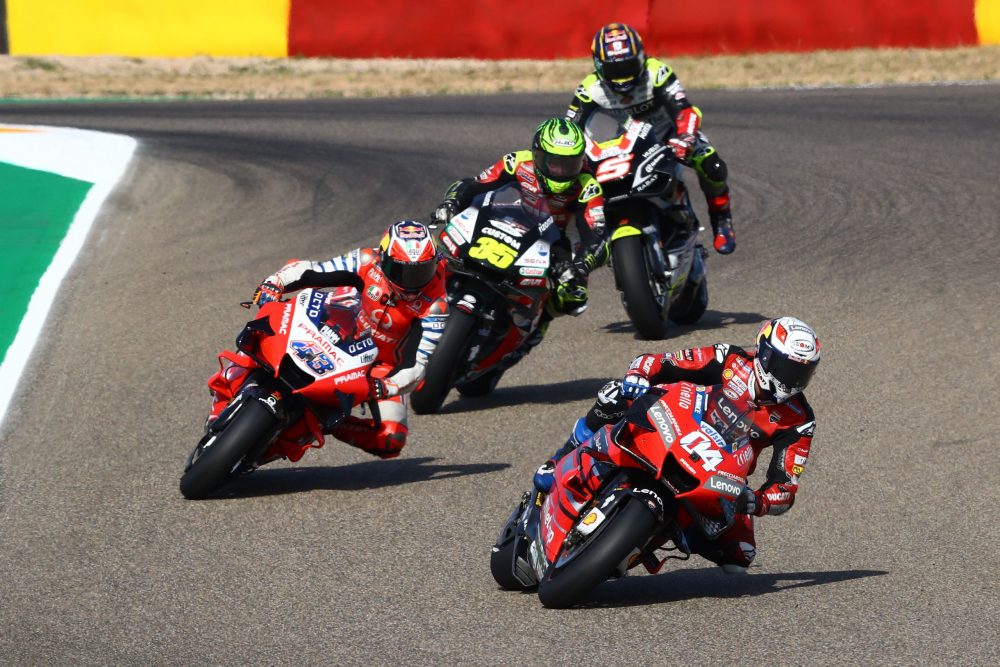 Soon the Suzukis were really moving forward. Rins took Morbidelli for third at the first corner before moving by Quartararo two laps later with a cool dive at the final turn. Mir was under them both at the same place on lap seven to sit third. And Morbidelli was right to be alarmed. “When you see the Suzukis in their mode so early in the race, you have to be scared,” he said. It was clear Viñales’ lead would be short-lived. Rins didn’t waste any time, grabbing the lead on lap eight, again with that tight line at the final turn.

At this time Quartararo’s woes were worsening. Marquez had disposed of Dovizioso, Takaaki Nakagami (LCR Honda) and Miller before he effortlessly glided by the Frenchman for fifth. Then it got out of hand. Within six laps Quartararo had dropped to 17th and out of the points. “From lap three we already had the front tyre pressure much higher than normal. It was totally out of control and we don’t know why,” he said.

Any chance of a Suzuki-Yamaha punch up started to fade on lap 13 as Mir honed in on Viñales’ rear. But by then Marquez was the real danger man, not Mir, as the Repsol Honda was lapping close to 0.5s quicker than anyone. VIñales yielded second and third to Mir and Marquez in quick succession, the final turn once again Yamaha’s trouble spot on lap 13. And Rins knew a fight was coming as his lead came down from 1.1s on lap 13 to 0.3s four laps on. “I was seeing on the pit board that Joan and Alex were coming really fast, but I tried to maintain the calm,” he said. 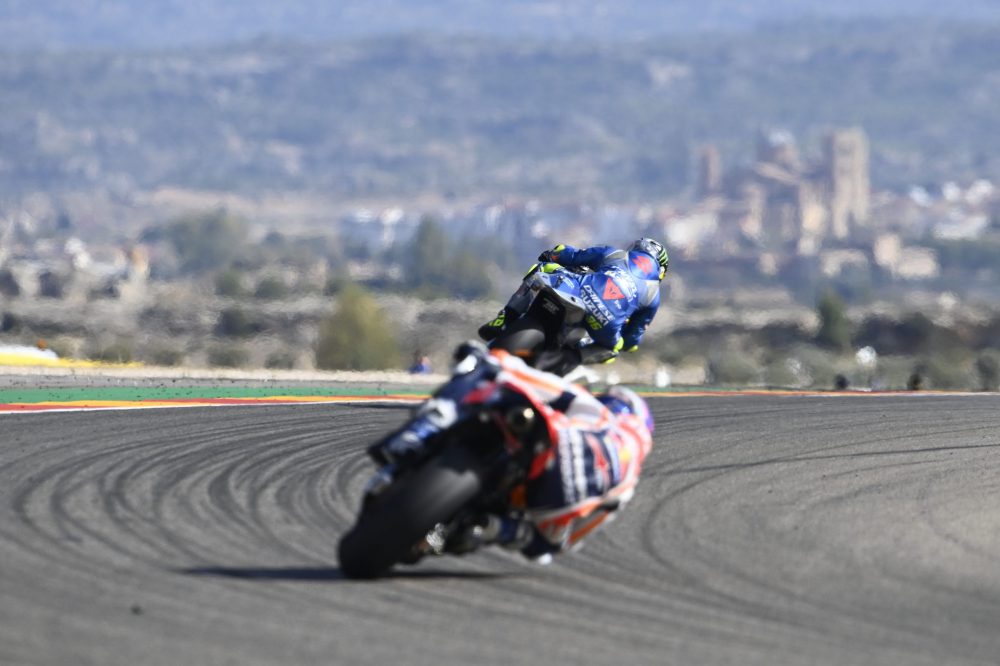 But with five laps remaining, Mir’s game was up, his soft rear crying ‘enough’. Marquez took full advantage, using a tight line at the final turn to breeze by. Then the Repsol Honda rider was on the attack, throwing his RC213V around like his brother and testing Rins’ resolve. He sat just a tenth back with three to go. But it was too big an ask in the end. A slide at turn 16 three laps from the flag was soon followed by a braking mistake at turn one. “That cost me the chance to fight for victory,” he rued. “On the last lap I tried again but he was really fast.”

Rins just held on, 0.2 ahead at the flag to claim his third MotoGP win, “My first from leading the race,” he said. “This one I think was a bit more difficult because it’s easy to do a mistake when you are leading the race.” Marquez stunned them all with his display, confirmation Le Mans was no one off. “So proud,” he said. “Rins was smarter on the first lap and he was able to recover more positions. This was the key.”

The temperature rise left Mir struggling in the final six laps, and just hanging on as Viñales mounted a late recovery. The Suzuki held on for a fifth podium of the year by 0.2s. “On the last eight, seven laps I start to have some trouble with the front part of the bike. These temperatures are the hottest during all the weekend and to get the correct choice for a race that you are behind someone is not easy.” 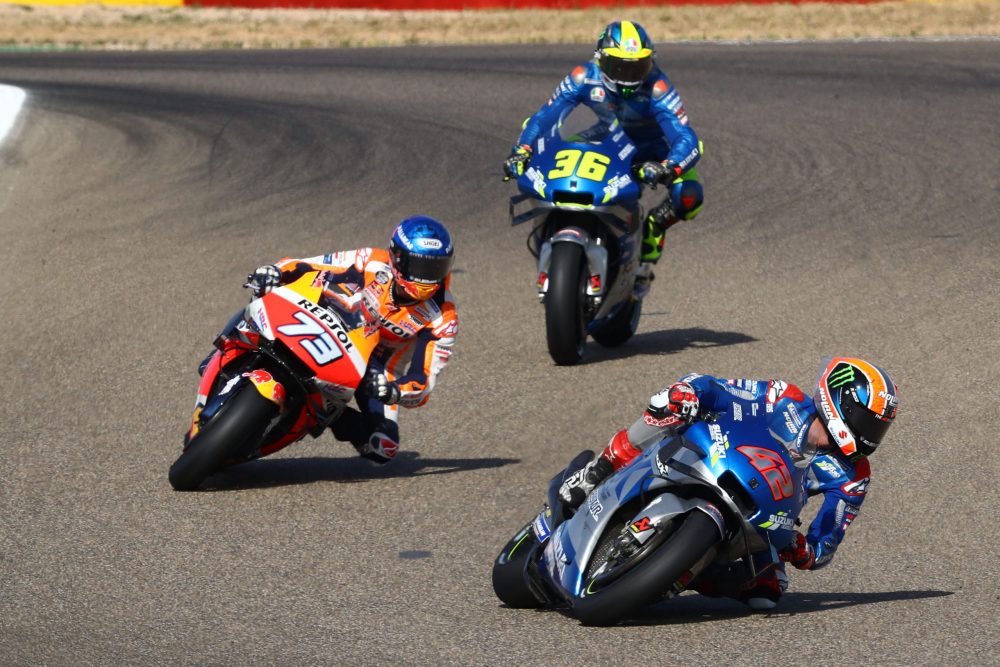 Viñales was content to finish as the top Yamaha, 2.8s off the win. “I got the most from my package today,” he said. Nakagami nicked fifth from Morbidelli with a last lap, last corner move. Dovizioso was seventh, ruing his tyre choice. “At the end it was hot in the race and the soft worked better than in practice.” Crutchlow dropped from the inside of the front row due to a slipping clutch, but eventually recovered to eighth. Miller, making his 150th grand prix appearance, was ninth

Zarco – the only Ducati to run Michelin’s softs – fought through to tenth, just 9.6s off the front. There was no such joy for countryman Quartararo, 18th at the flag. The title fight couldn’t be closer as a result. Mir (121 points) leads for the first time, 6 points ahead of Quartararo (115). Viñales (109) and Dovizioso (106) are within reach, as is Nakagami (92) in fifth. Morbidelli (87), Rins (85) and Miller (82) shouldn’t be ruled out either in this craziest of years. 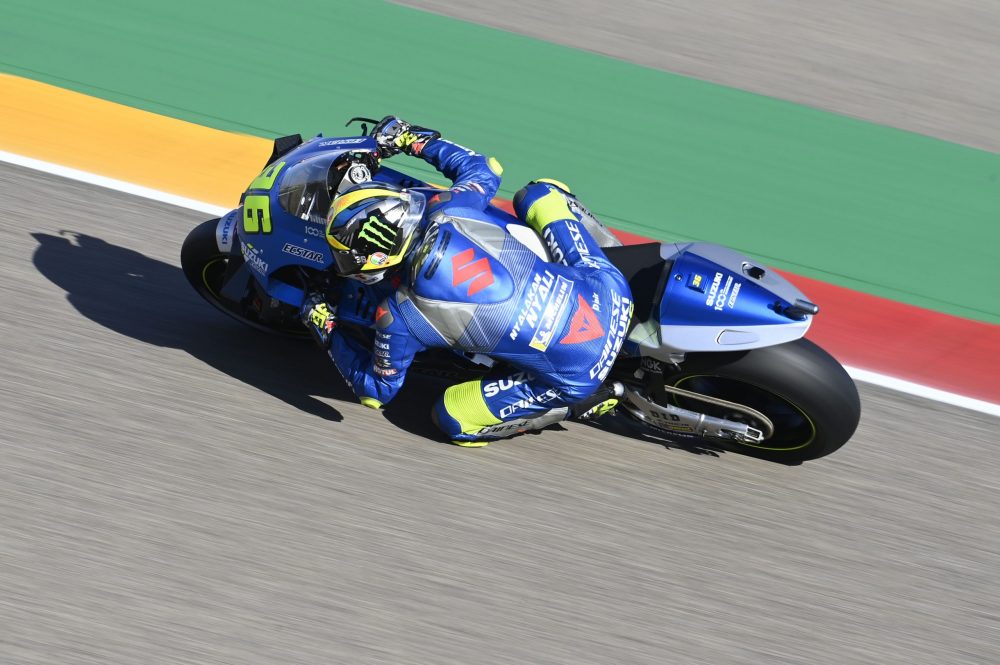