Like many young kids who had parents who were into motorcycles, Harley-Davidson’s current Chief Stylist Ray Drea got an early start on two wheels. One advantage he had was an older brother who was into customising. By the age of 10, in 1972, Ray was working with him in the garage, and within two years little brother was doing base paint and flame jobs on Sportster tanks. Pinstriping and lettering were quickly added to his skills, and by 14 he had an after-school job at a conversion shop painting murals on vans. As a teenager, he was juggling this job with the freelance paint jobs he did on bikes at his home.

In art class during Ray’s first year of high school, he became friends with Michael Davidson, a coincidence that linked him to Willie G Davidson and later to Harley-Davidson, which would have a huge impact on his future. After Willie saw one of Ray’s custom-painted tanks at an art show, he asked him to come into the H-D Design studio to paint a one-off tank for a dealer incentive bike, and then to stripe the prototype of what would become the 1981 FLH Heritage Bagger. Not bad for a 16-year old!

The following years saw Ray develop from a self-taught freelance graphic designer to a full-time commercial artist, and then a salaried designer sitting beside Willie G in the design studio. Eventually, after Willie’s retirement, Ray replaced him as Chief Stylist of Motorcycling.

During one of my visits to Milwaukee, I asked Willie G to loan me his #0001 1977 XLCR and invited Ray to build a custom for my café racer exhibition titled “Ton Up”. Willie agreed, while Ray just smiled and put it on the long finger. Six months later, Ray called to say he was in and would use this opportunity to pay tribute to his mentor by reflecting on Willie’s original café design. Ray knew a Harley-Davidson XR1000 would be the perfect point of departure for his custom. This factory built 998cc air-cooled OHV 45º V-twin was based on the XR750 racer and was claimed to produce 52kW at 5600rpm, but Harley also offered a hop-up kit to bring it up to 67kW. More than anything else, it was just the look Ray wanted. As he describes it: “The visuals of the motor just scream testosterone!”

With this in mind he bought a 1984 donor bike (actually a slightly customised one in good condition), keeping just the engine and frame.  “I also found a never-used prototype tank for a XR750 in the design department that was a great starting point for the new tank.” After Ray came up with his design for the bike, he collaborated with the very talented Lock Baker of Eastern Fabrications in Connecticut on the skins, oil tank and exhaust, and the equally talented Mike Lange of Milwaukee (Ray’s home town) to do motor work, additional fab and assembly. As a bike designer used to working on production bikes, Ray approached this a bit differently to the way many customisers would. He sketched out a vision that basically “tightened the overall package and refined the lines”.

The aluminium gas tank and rear section were shortened, he switched over to carbon fibre wheels and went a little fatter with the rubber, inverted the forks, and used a flush-mount aviation-grade fuel cap. And he basically used the finest ingredients – such as Brembo brakes – throughout. The engine remained the centrepiece with the beautiful matte-finish intakes on the dual carbs and perfectly formed exhaust tucked so neatly into the left side. 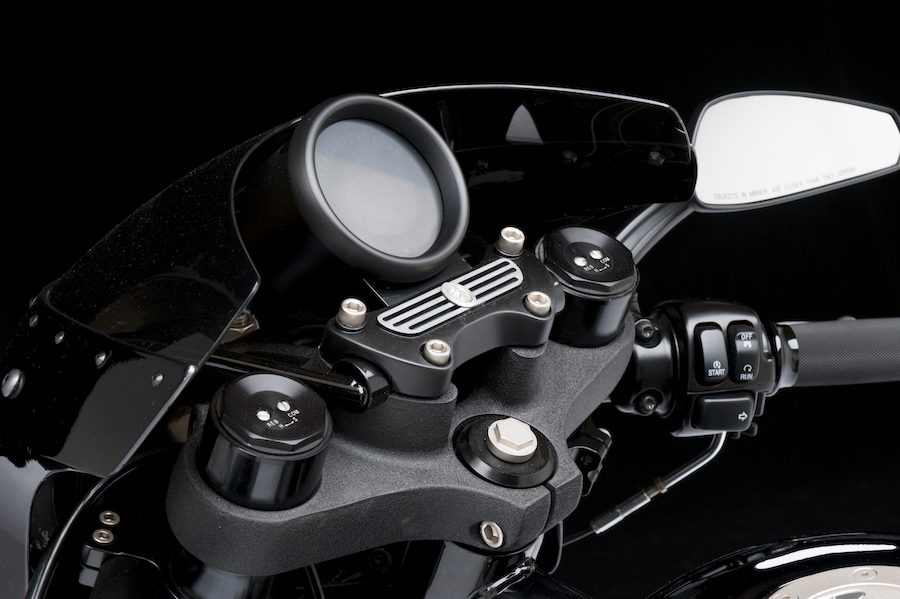 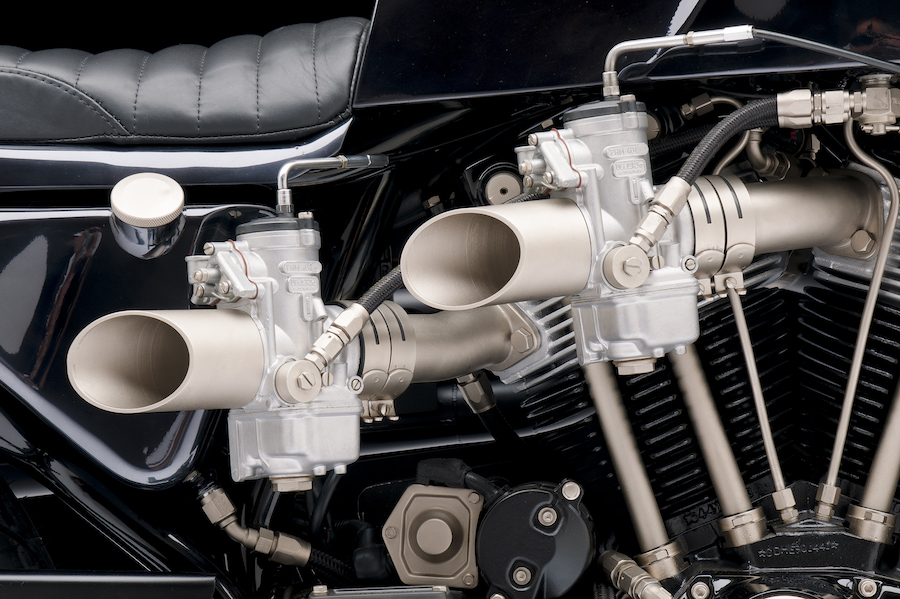 The toughest part of this build was dealing with long-distance fab work on the east coast, but even this wasn’t bad, as Ray sent the prototype XR750 tank to Lock Baker along with diagrams to show him what he was looking for. There was plenty of back and forth with photos and phone calls, but in the end it was all worth it. Ray particularly liked how Lock did the exhaust, how it hugged the left side so tightly, and how it showed off his incredible welding skills.

Of course, getting it to the exhibition on time was a bit tricky. Ray missed the free bike transport I provided and ended up having to pull an all-nighter to get it to Sturgis by the Saturday-morning grand opening, 1400km away!

After the bike was finished and Ray rode it a bit to get the kinks out, he had planned to sell it so he could move on to another project. But when Willie indicated how much the project meant to him, the two struck a deal. The last Ray saw of the XR was when he dropped it off at Willie’s house and his mentor jumped right on for a ride around his neighbourhood. Now the bike is a proud addition to his esteemed collection.