Whether you’re looking for LAMS, living in the big smoke, downsizing to save your licence, or just up for a laugh, go Grom go!

There’s something about the Grom that brings out the grom in everyone, no matter how miserable they are. Even the guy in his tray-topped dick extension who, upon seeing me glide through the Melbourne peak hour traffic and pull up in front of him, just couldn’t help but boot the ute and sit centimetres off my arse on a 60km/h city street – you know, just to prove that my two- valve OHC 124.9cc single-cylinder miniature motorcycle was no match for his angst-fuelled five-litre V8. Even that half human wouldn’t be able to resist having a go and cracking a smile if you locked him in a bright room with Honda’s latest pint-sized petrol miser.

In fact, I couldn’t think of better therapy for an angry person than 30 minutes a day on a Grom. It certainly worked for me, because Ute Boy still has both his mirrors and tail lights.

Honda has quietly been doing its bit for world peace by selling hundreds of thousands of happy-inducing Groms, or MSX 125s as they’re known in some countries, and finally the chart- topping merry-maker has arrived Down Under. If early sales figures are anything to go by – 254 units sold in the first four weeks – Australia is well and truly on board with the whole Gromenomenon. It also looks like Aussies aren’t immune to the kind of Gromania seen in other parts of the globe, with instances of extreme Gromodification already taking place on our shores.

Don’t believe me? How does spending $5000 on hot-up parts for a sub-$4000 125cc motorcycle sound … before the bike even arrives!? Sounds like a bona fide psychological, or perhaps non-logical, affliction to me. So, beyond all the hype, what is the Grom actually like to ride? Well to be quite honest it’s not terribly exciting in terms of speed-induced thrills, but it is terrifically entertaining, and also totally addictive. Unless you shell out some extra fun- vouchers on the staggering array of Gromfaster goodies which are available, you get little more than 6kW of power to play with. This is enough to keep you ahead of the general flow of city traffic, but does require a full-throttle launch to do so. In no time at all you have the technique nailed – grab a fistful of revs and slip the clutch all the way out without letting the revs drop, at which point you’ll be flying along at 35-40km/h, then as soon as the clutch is fully released snatch second gear and keep wringing it up to 60km/h. You’ll need to snick third at 70km/h if you’re in an 80 zone, or go all the way to the top of the four-speed box if you’re on a 100km/h highway. That’s pretty much where the Grom reaches its limit. I could stay on 100km/h while sat up, and even saw 111km/h on the speedo going downhill with my chin on the triple clamps. This is faster than I managed to get out of the Braaap Urban, and also quicker than Ralphy’s reported top speed on the Kawasaki Z125 Pro. But I guess the only way to settle who’s King of the Kidz once and for all would be to conduct a small-fry shootout!

Quite obviously speed isn’t what the Grom is all about, and the power it has is totally appropriate for both its physical size, and also for a large percentage of its target market. I’m talking about learner riders, and folk who just want a cheap, simple, funky form of transport for urban living. The Grom certainly fits the bill perfectly for both these groups. I simply can’t think of an easier or less intimidating motorcycle on which to learn how to ride. Straight away the Grom’s size takes away one of the initial hurdles of motorcycling. Balancing a smaller bike is easier, and saving it from falling over when you lose your balance more so. I’d guestimate that nine times out of 10, motorcycles are dropped either when they’re being manoeuvred at very low speed by a rider, or when they’re being pushed without the engine even running – and this is particularly true for taller bikes. If this happens with the Grom, then the person responsible should probably stop drinking immediately.

It would be easy to pass off the Grom as a novelty bike, but like its power output, all its essential elements are either proportional to the bike’s size or exceed it. Take the Nissin hydraulic disc brakes for example. As a percentage of wheel diameter the front disc is 72.1 per cent and the rear 62.3 per cent. Now Compare that to Honda’s best-selling LAMS CBR500RA supersport bike, which has a corresponding percentage of 74.1 per cent and 55.6 per cent respectively. Both bikes have Nissin calipers, two-piston front and single-piston rear, and having smaller discs means the ratio of brake pad surface to swept disc area is actually much greater on the Grom. Unlike the Grom, the CBR500RA does benefit from ABS, but then the CBR is also capable of almost twice the top speed of its smaller sibling, and is twice the price.

Another aspect of Grom performance that is impressively disproportionate is the level of grip offered by those little 12-inch IRC tyres. They’re as sticky as Grom snot.

This comes as no surprise to an old scooter hoon like me, as the popularity and seriousness of scooter racing in Europe, Asia and even in the United States means sports tyre technology in 10- and 12-inch sizes is up there with the best 17-inch production race rubber. You can even get slicks if you fancy taking your Grom down to the local go-kart track.

Suspension performance is often no more than an afterthought on a low-budget bike, but again the Grom surprises, with a shock that convincingly outperforms its ignoble appearance, and a pretty trick looking USD fork that matches the rear action well. Fully adjustable Öhlins shock and fork internals are available (oh yes!) should you succumb to your abject desire for bigger and more radical Gromage, but the standard kit does a bloody good job too. 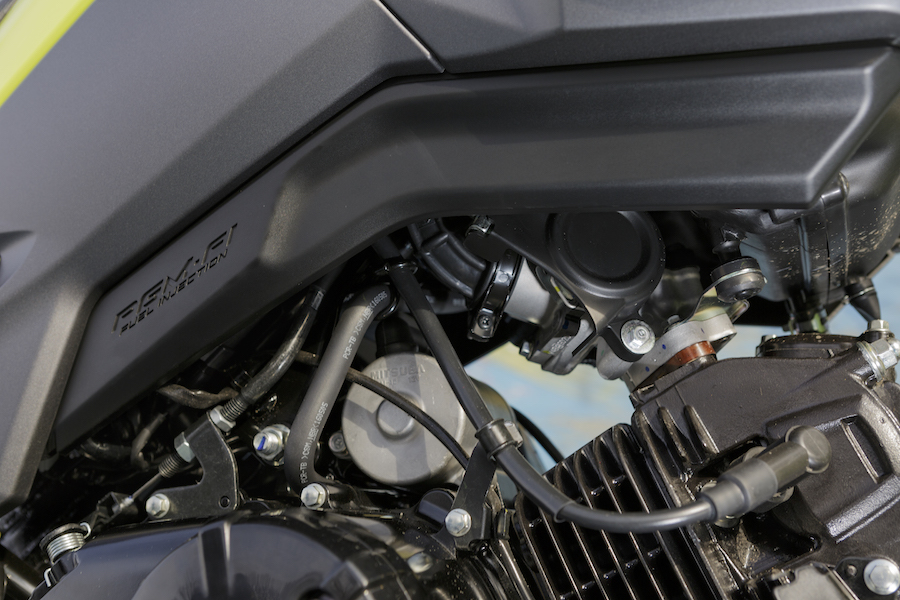 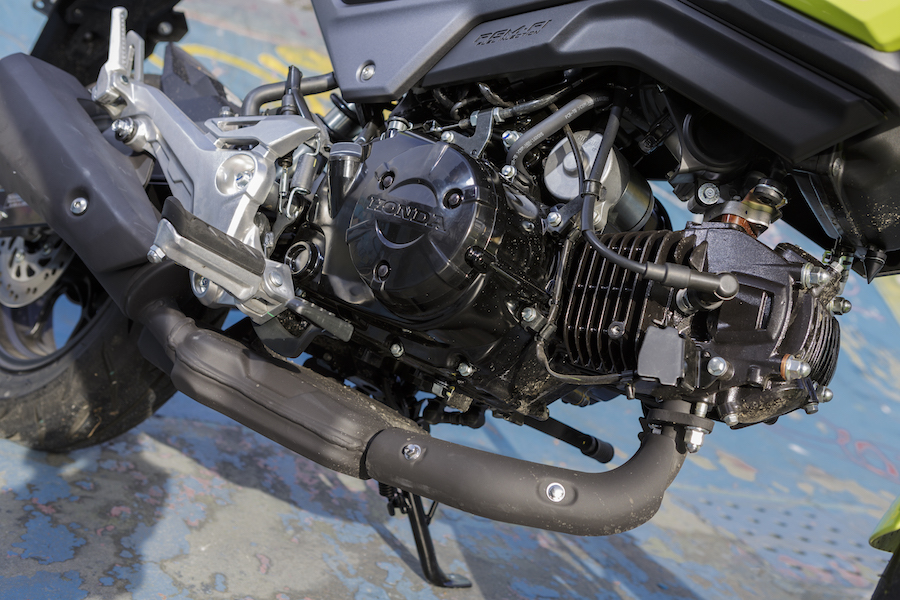 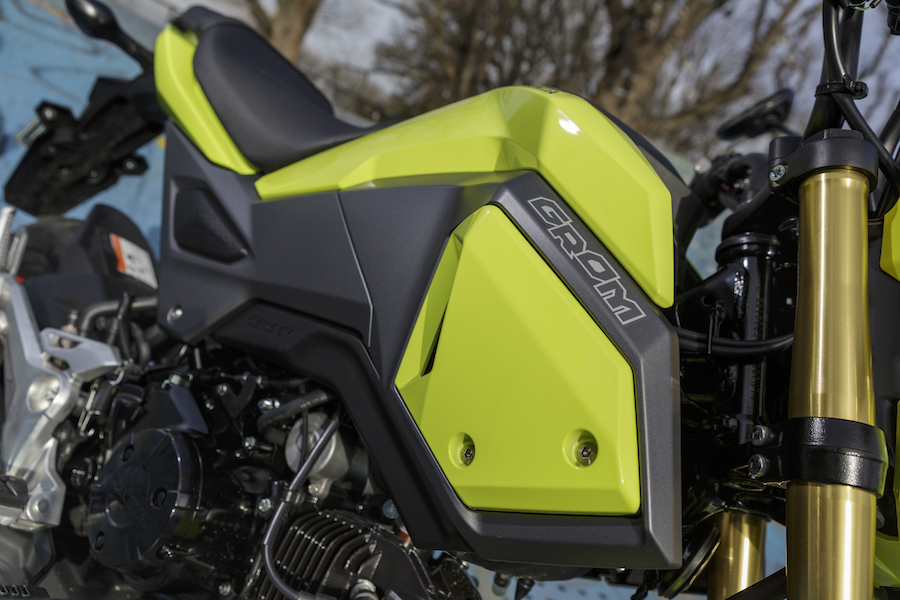 The Grom’s cockpit is as compact as you would expect, but that doesn’t mean it’s purely a hobbit’s domain. Even full-sized humans can enjoy this bike, though the lankiest of riders may find the pillion seat their preferred perch. My 173cm munchkin frame is just about perfect for the Grom, but even I would prefer it if the bench seat didn’t have the step up between the rider and pillion, just so I could stretch out once in a while. If you don’t mind a close cuddle from behind there is ample room for two-up trips. But be aware and choose your squeeze wisely – a crosstown cruise this cosy may even lead to a little Gromance.

As is the case with a scooter, it’s important to remember the Grom sits below the window sills of most cars, and all vans and trucks. All the fluorescent Lemon Ice Yellow paint in the world won’t necessarily help you be seen among the traffic when you’re this low. Garish riding garb is strongly advised for Gromming through busy city streets. It’s also a convenient excuse for treating yourself to a slightly more vocal exhaust to get some attention – as if you lot need any excuses.

The dash sits quite a long way below your eye line, so its probably a good thing that it avoids distracting you by only displaying the bare basics – trip meter, clock, tacho, speedo, fuel gauge – not that you’ll be needing to check the last item on that list very often. Grom owners are reporting some pretty amazing fuel consumption figures, squeezing 300km out of the 5.7 litre tank. At around two bucks every hundred clicks, it’s even cheaper than walking! 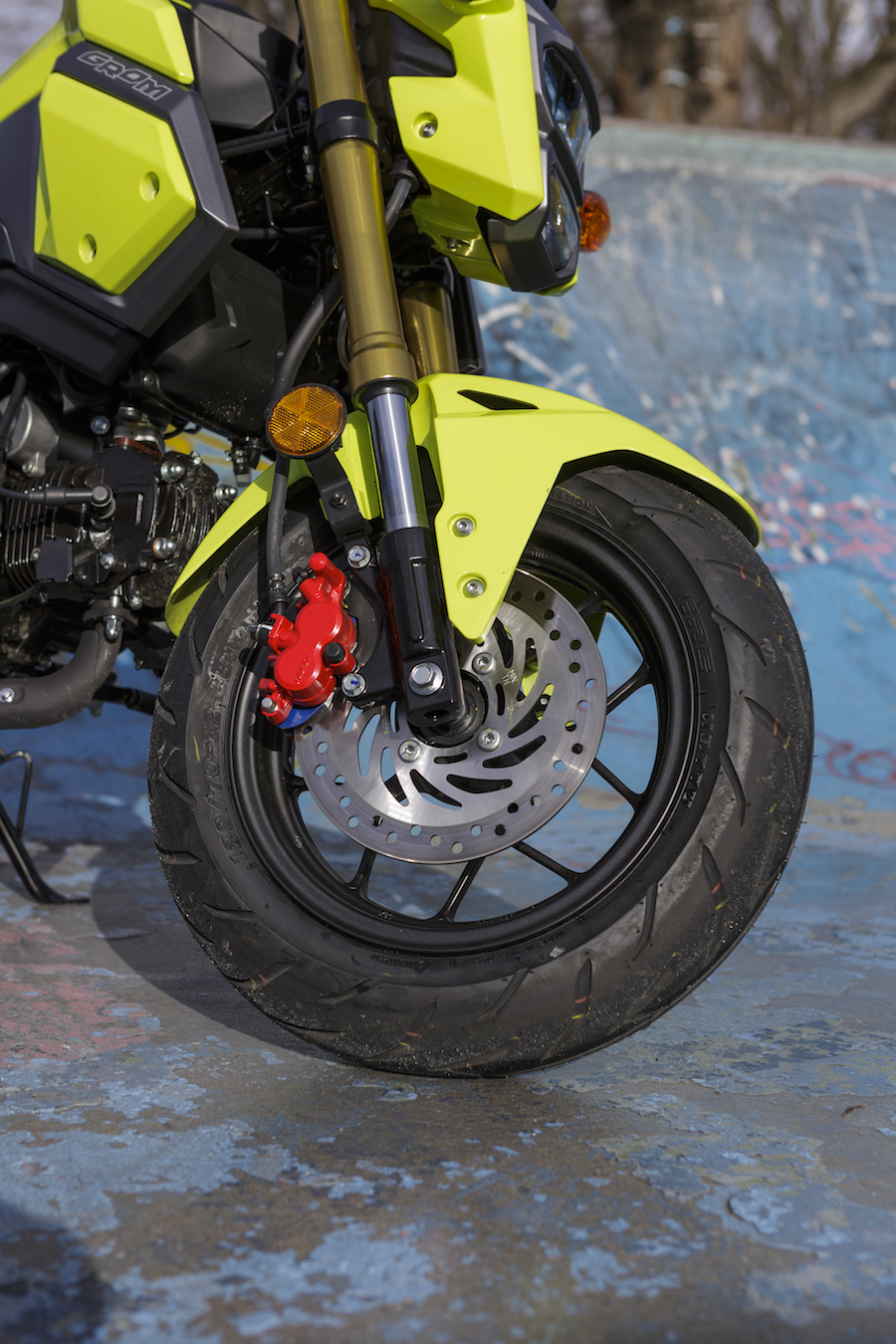 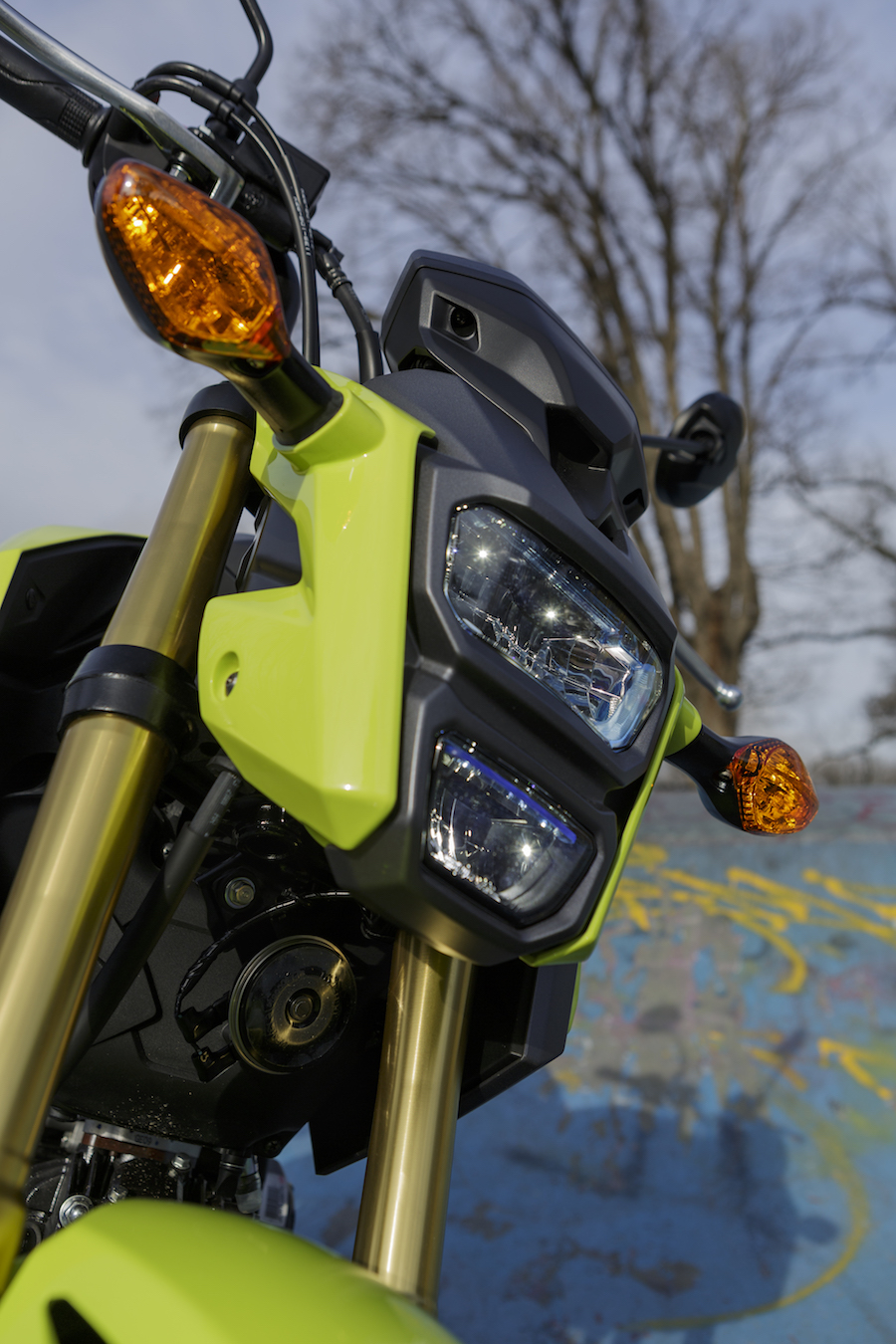 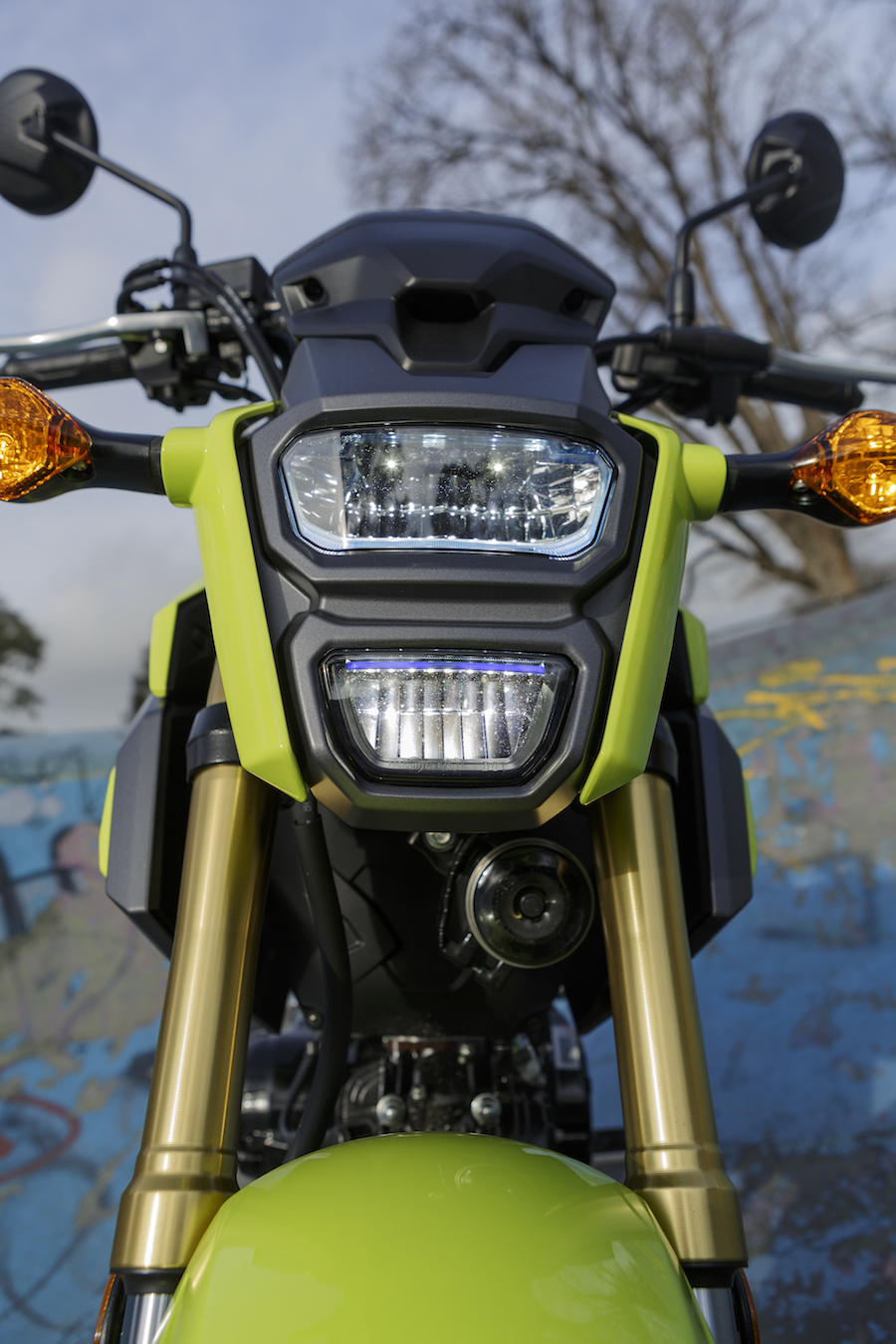 The Grom may be essentially an old (alright, very old) engine design, but PGM electronic fuel injection brings it as up-to-date as it really needs to be, and helps stretch that tank range further than ever for the notoriously frugal Honda four-stroke single-cylinder family of bikes. I’d have loved that EFI on my SL70 back in the day – another laydown-cylinder Honda and my very first motorcycle – because the Grom starts sweeter and runs smoother than my old girl ever did. Automatic fuel enrichment and a closed loop calibration system were pure science fiction when I was scrambling (motocross for you young ’uns) my little SL, although it did have a rather trick home-made monoshock rear end!

The fact that Kawasaki and Braaap got MN6603p044_HONDA_GROM.indd 51 their Grom-like Z125 Pro and Urban models respectively on the market in Australia well before Honda did is surprising, and could have even prompted the big H to finally react. Whatever the reason, Honda is making up for lost time by pushing Groms off the showroom floor faster than they can be shipped in. It seems that the motorcycling public, young and old, still identify Honda with being the big deal when it comes to small motos.

It’s also worth pointing out that you’ll never have to Grom alone, as already there are Grom Facebook groups and Grom social gatherings springing up, to bring these loveable like-minded loonies together. See you there fellow Grommets!