50 YEARS OF KAMFARI | WATCH THIS

Every great race has a beginning and the Kamfari story began with three key men who are sadly no longer with us. Peter Thomsen, Don McCann and Jack Veal, all heavily involved in the Darwin motorcycle community, were the driving force behind what is now the longest-serving motorsport event in the Northern Territory. 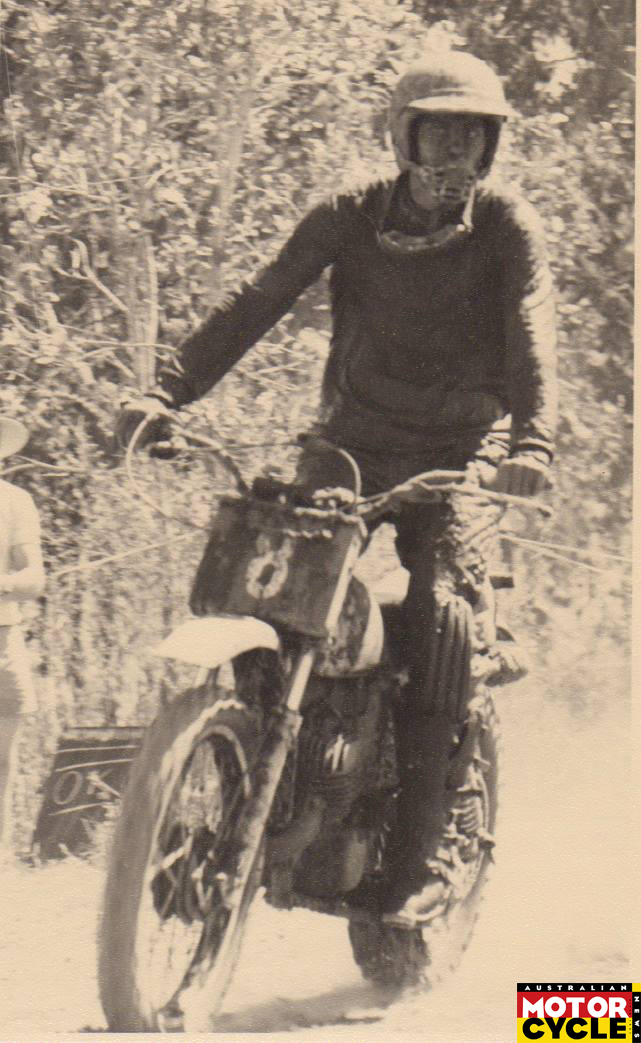 The idea of Kamfari mud enduro grew out of necessity. The swamps and muddy plains made for some great riding, but were more or less inaccessible for friends and families of the riders who wanted to spectate. After a few discussions at Don McCann’s house, it was decided to create an enduro that circulated around laps, with a pit area that offered spectator viewing. The men had also read about the newly formed Baja 1000 in America that riders had to complete with no assistance. So after some planning, Peter Thomsen offered up the land at his Kamfari Safari Park and a 100-mile enduro that tested man and machine was born. 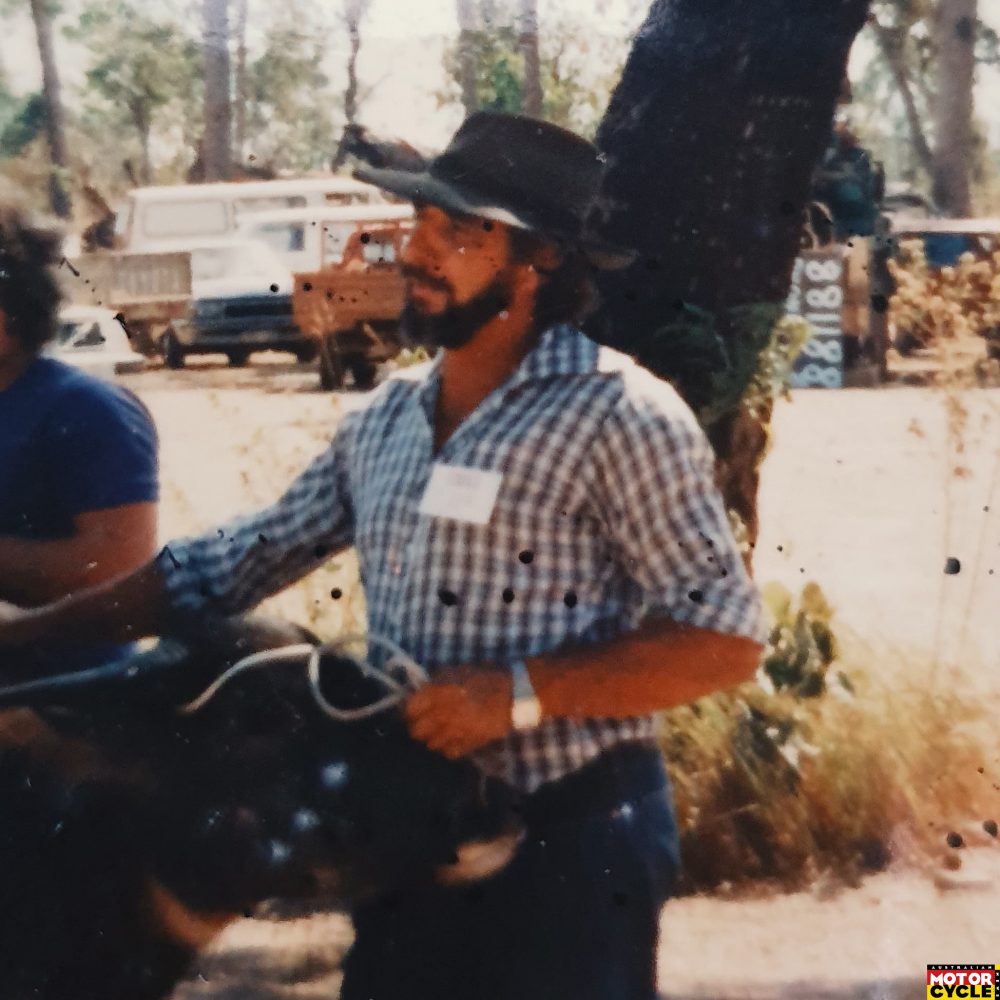 Thomsen, McCann and Veal had visions of testing riders and machines, pitting them against themselves and the elements. The course would be a mix of spear grass, swamps, billabongs, mud and hardpack trails. Paperbark logs often crisscrossed under the water, adding to the difficulty. After each water section, the track opened up onto road sections to give riders a chance to dry out before the next obstacle. No rider was allowed to see or ride the track prior to the race – Kamfari was there to test you on every level. How they managed to get through on early carburettor-fed, twin-shock bikes defies modern logic. 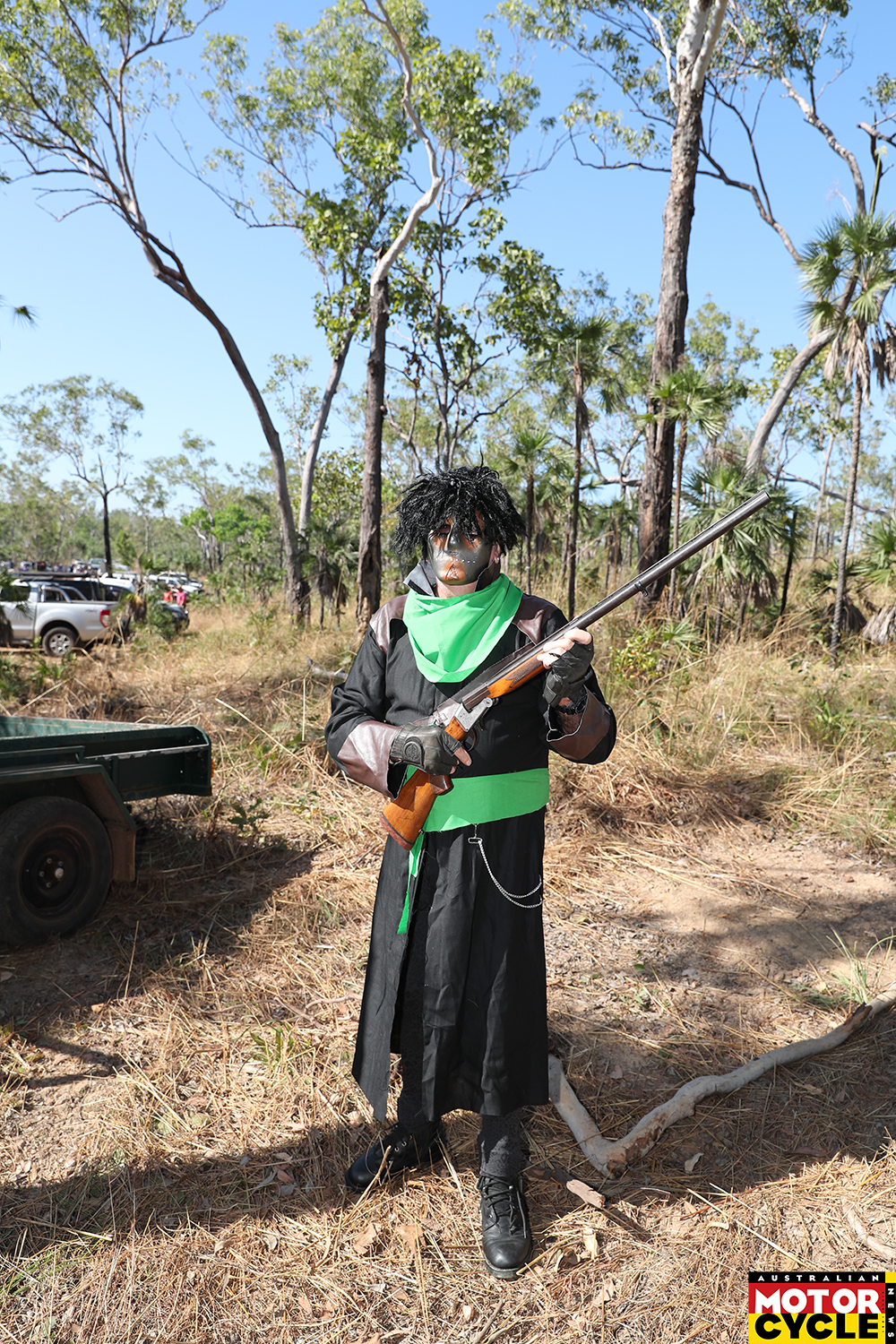 Dennis Saunders carries on the legacy of Thomsen, starting each race in costume with a shotgun

Not only is Kamfari a unique race, but Thomsen added his own flair. He would dress up as a different character each year and start the race with his Tennessee flintlock shotgun. One year he had mud and grass all over him, and a catfish hanging out his shirt.

“Bit wet out there boys,” he said, before signalling the start of the race with an almighty boom.

Another year he rode in on a donkey from out of the bushes, shotgun over his shoulder. One rider had fright when his bike would not start, he was subsequently chased down as he pushed his bike, by Peter dressed as a Viking, jabbing him in the arse. 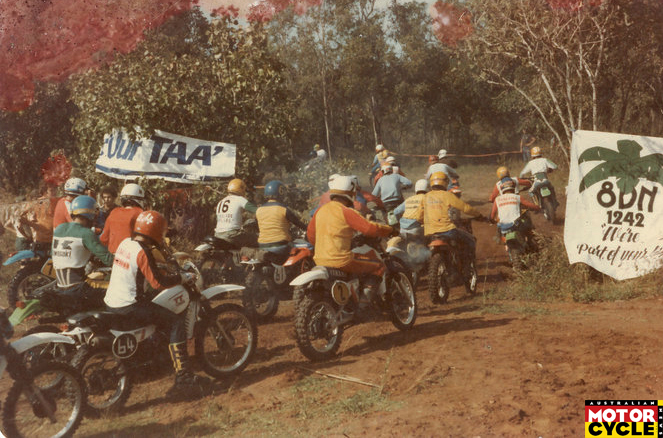 In 1972, Lyndon Schlein (see interview sidebar) was riding every event around Darwin; Scrambles, Enduro, Speedway and trail riding and had very little spare time. So when the Kamfari came up, he was not sure he would be able to ride. However a last minute decision to pull the lights off his Suzuki TS250 Savage and enter the race would eventually put his name in the history books. 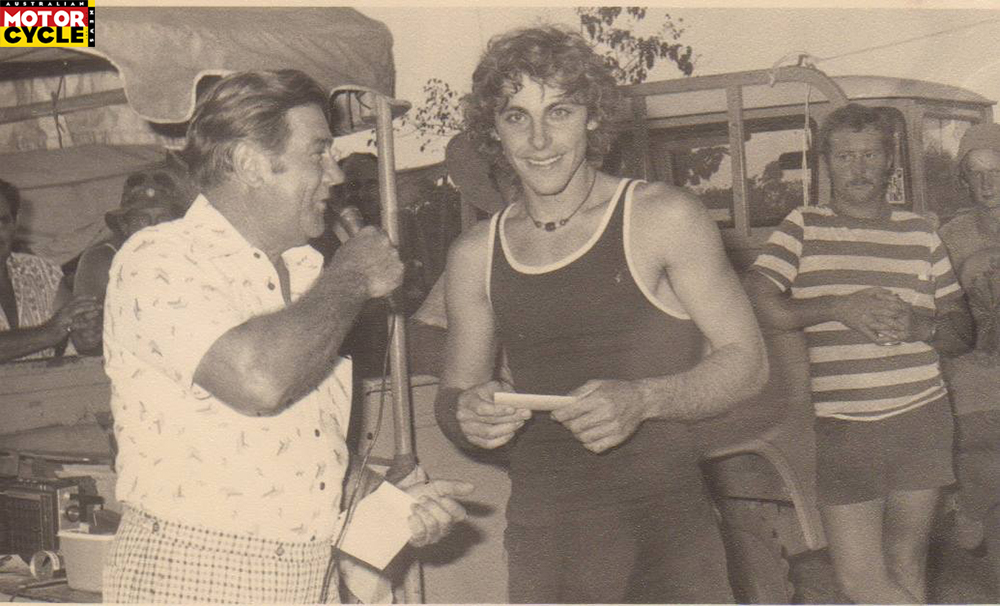 With a full calendar, Schlein raced speedway on the Saturday night before driving to the Kamfari Park straight after the races. The plan was to sleep the night, have breakfast, then race Kamfari in the morning. One small flaw in that plan, however, was he didn’t take anything to eat, assuming breakfast was supplied. This was going to be a long 100 miles. He toughed it out and went on to claim victory in the inaugural 1972 Kamfari. 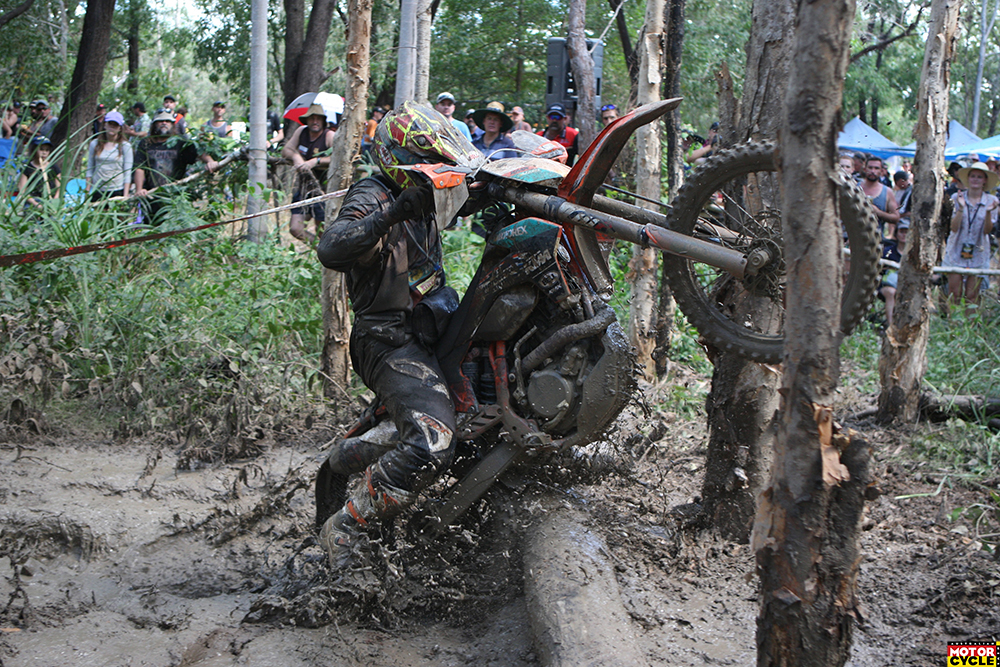 Lyndon went on to win three in a row, then won again in 1976 but you’ll never guess the one thing that made 1975 – the year he didn’t win – unique to the others.

After his victory in 1972, Lyndon’s wife Lynette washed his muddy race gear and said she would put his undies aside for the following year’s race. The following year, Lyndon wore his so-called ‘lucky jocks’ and won his second Kamfari. He wore the same undies in the 1974 race and celebrated another victory. Lyndon was showering at the Kamfari Park after his third win and upon exiting the shower, found his undies had been taken. With no good luck charm, 1975 was not Lyndon’s year. Who knows? Maybe Jeff Blake was wearing them? 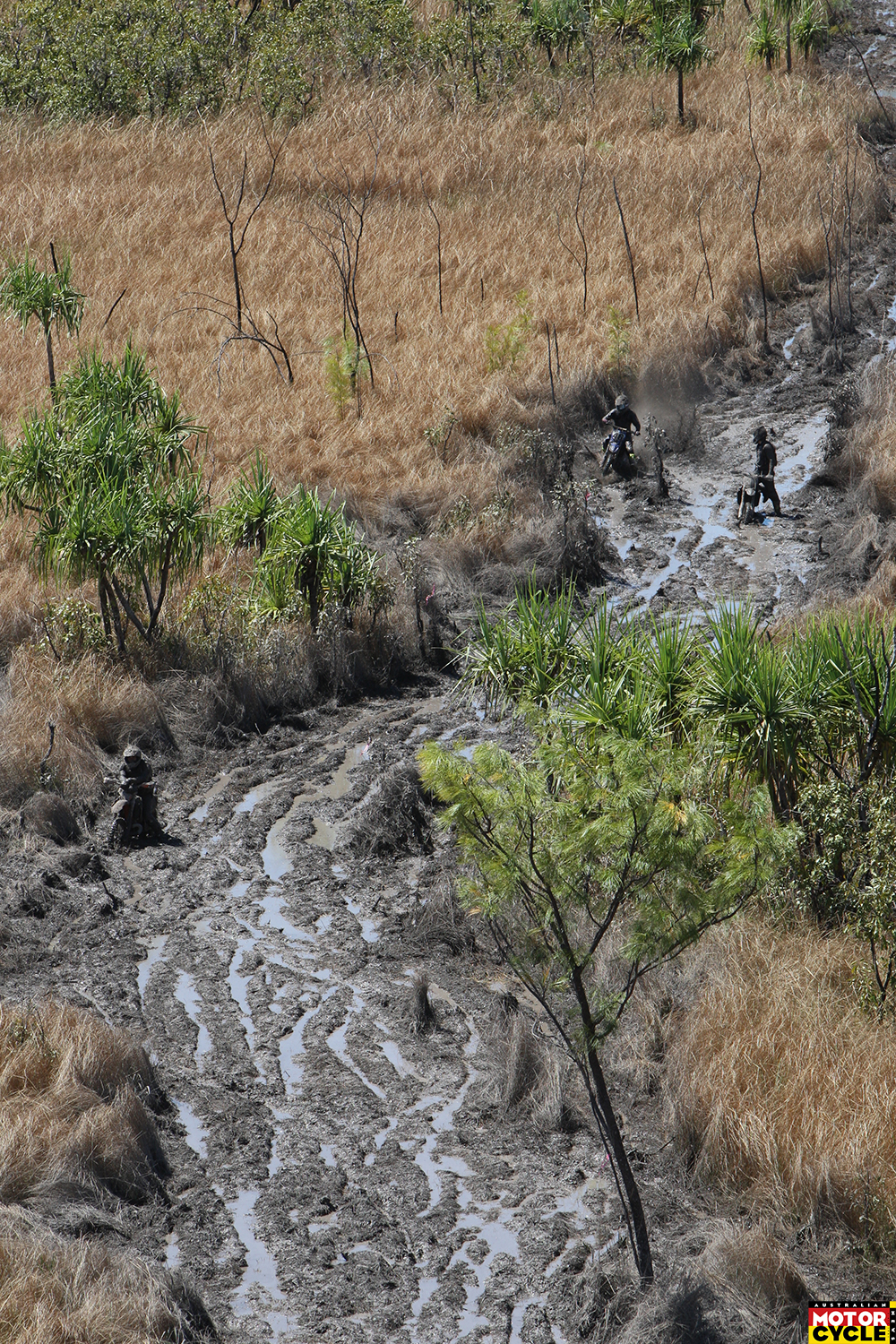 Opinions differ when you start talking overall King of Kamfari. In the early days, Darwin local Tony Morris racked up a very impressive 10 wins between 1984 to 1998 and was definitely the man to beat. His record looked nigh on impossible to match and his reputation as the Kamfari master spread far and wide. However in 2004, a NSW rider ventured north and entered his first Kamfari… and won. That rider was Brad ‘Wonka’ Williscroft riding for KTM Australia. Although it took several years before his return to the Northern Territory, Wonka went on to match Tony Morris’s overall win tally of 10. What separates Wonka’s record is the fact he only entered 10 Kamfari’s… subsequently winning them all, while Morris added several well deserved podiums to his Kamfari career. 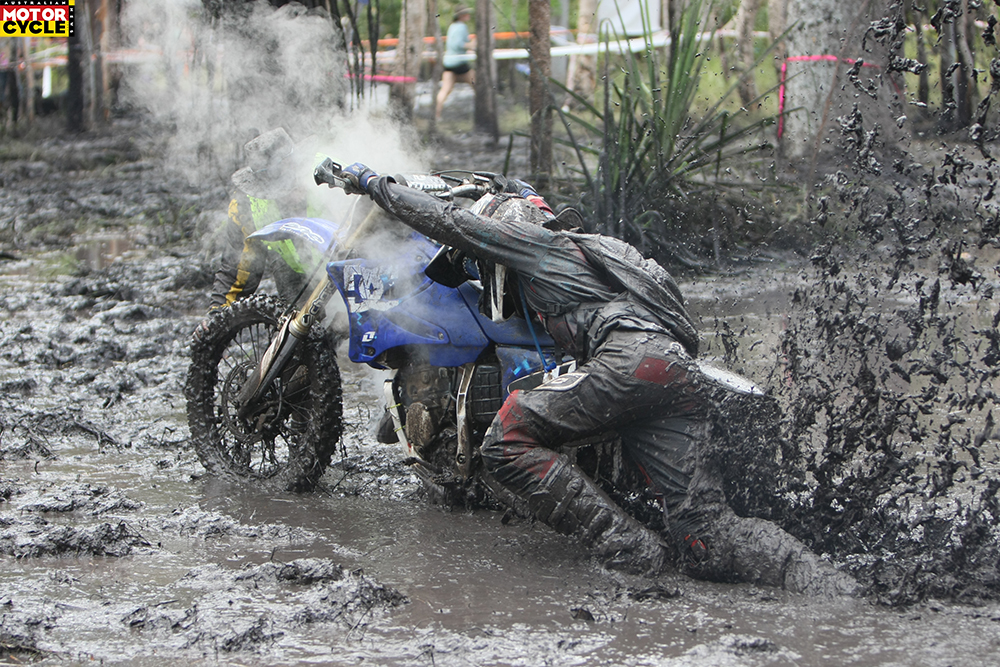 Every Kamfari has mud, but it’s not all the way around the track

Kamfari rules are pretty simple and straight forward. Since the event is designed to test rider and machine against the terrain and elements, it’s pretty much just up to the rider to fend for him/herself.

Riders are not allowed to pre-run the track.

A dead engine start requires riders to stand behind their bikes and wait for the shotgun to fire, before mounting the bike, starting the engine and racing down the short straight to the first corner. 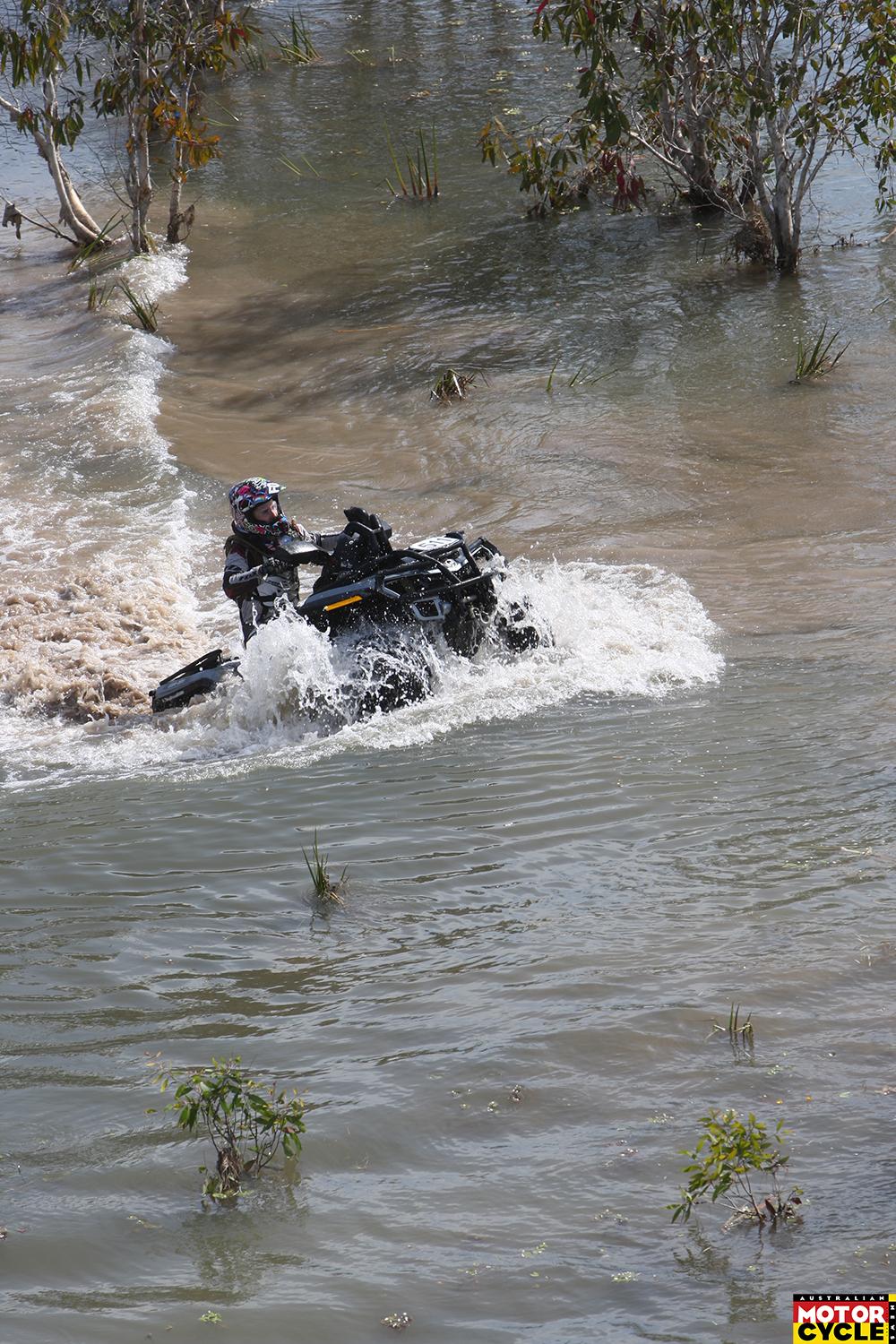 Quads also race on their own course. Snorkels are a must

In true enduro style, riders must carry any spares and tools they think they might need during the event. Mud plays havoc on brake pads, and air filters often get swamped, so these are usually carried along with a spare spark plug.

Single tape markers, usually tied to trees, mark the track and riders must keep these in sight at all times. When continuous tape or bunting channels are formed, riders must stay inside. Refuelling of bike and body is done in the pits at the end of each lap, should the rider choose to stop. No assistance is allowed in the pits, it’s up to each rider to fend for themselves. And if a rider becomes bogged anywhere along the swampy course, only marshals or active competitors are permitted to assist. 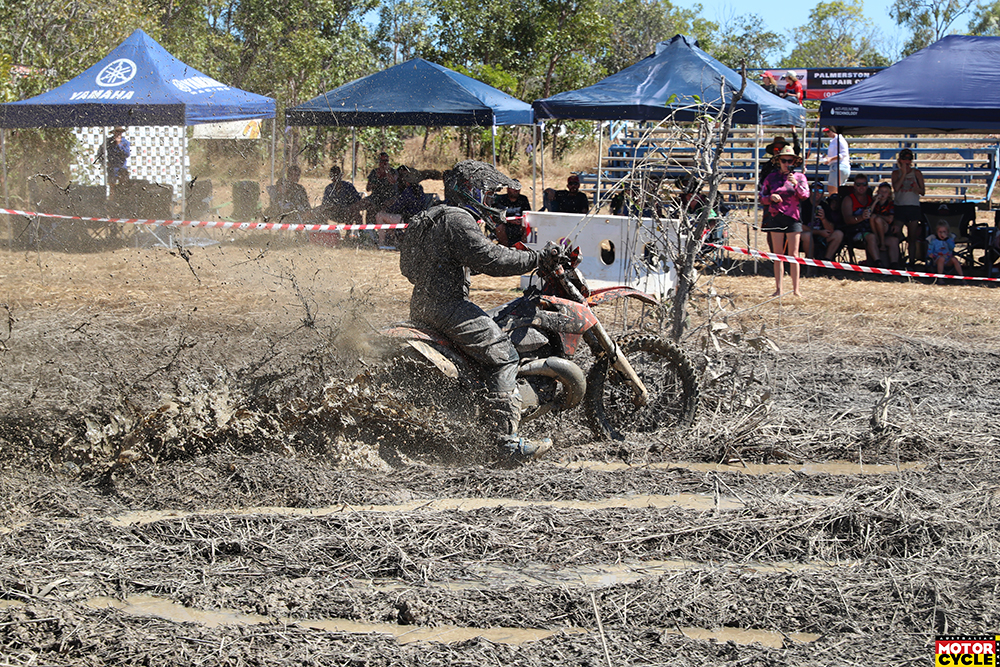 And anyone who has raced Kamfari knows you do need some luck on your side. The 2011 event was one of the closest races of recent years, with Victoria’s Jehi Willis putting the pressure on Williscroft. On lap one, Williscroft completely submerged his KTM in a buffalo hole and lost over 10 minutes de-watering the bike. Once going again, he slowly caught up to Willis and the two gun enduro riders were neck and neck by the two-hour mark. 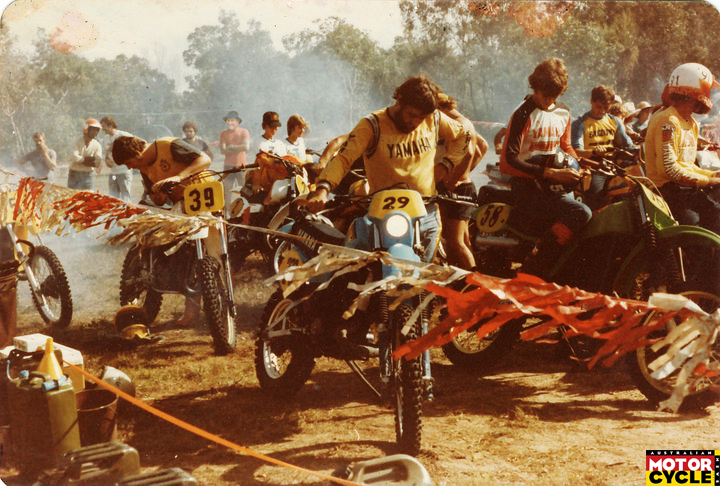 For the next two hours, the lead swapped on every lap. Willis looked set for the win on the second-last lap as the quagmire built near the finish line. The final lap had everyone on edge, as Willis emerged from the last creek crossing, finishing line in sight. He went right, following a previous good line, but was swallowed up by the mud just meters from the flag. Williscroft was next through the creek, kept left and stayed out of the bog to take another win. 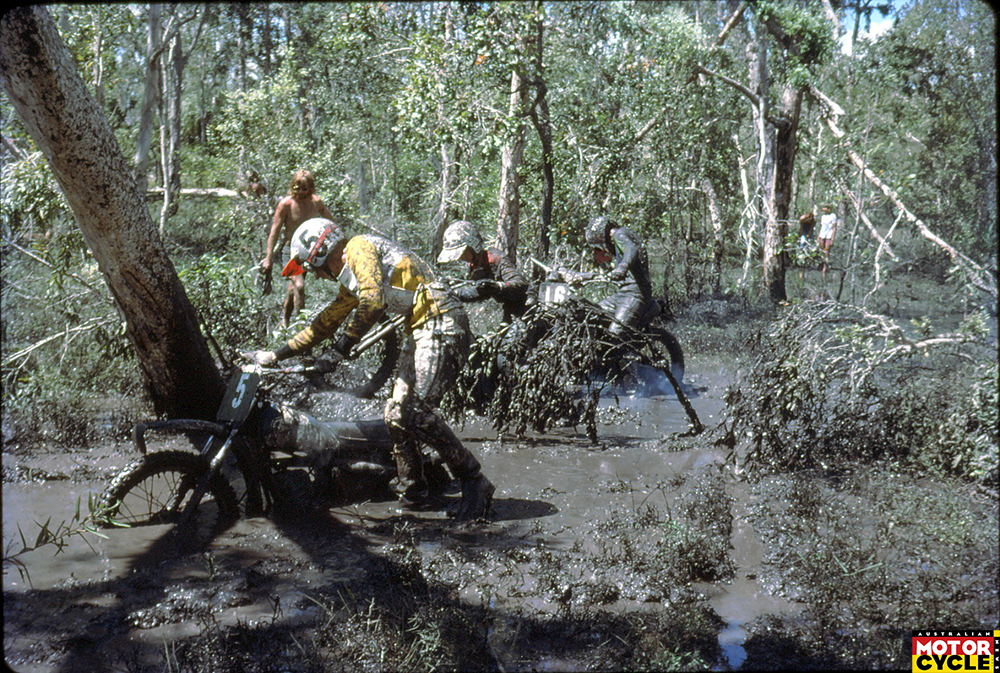 But 2021 was no walk in the park. The attrition rate was higher than in recent years and perhaps Mother Nature and the extreme wet season had something to do with the results. Past Kamfari winners Chris Warwick, Ayden Bridgeford and Daniel McInnes were the hot favourites to take out the win, however each would have issues throughout the race. 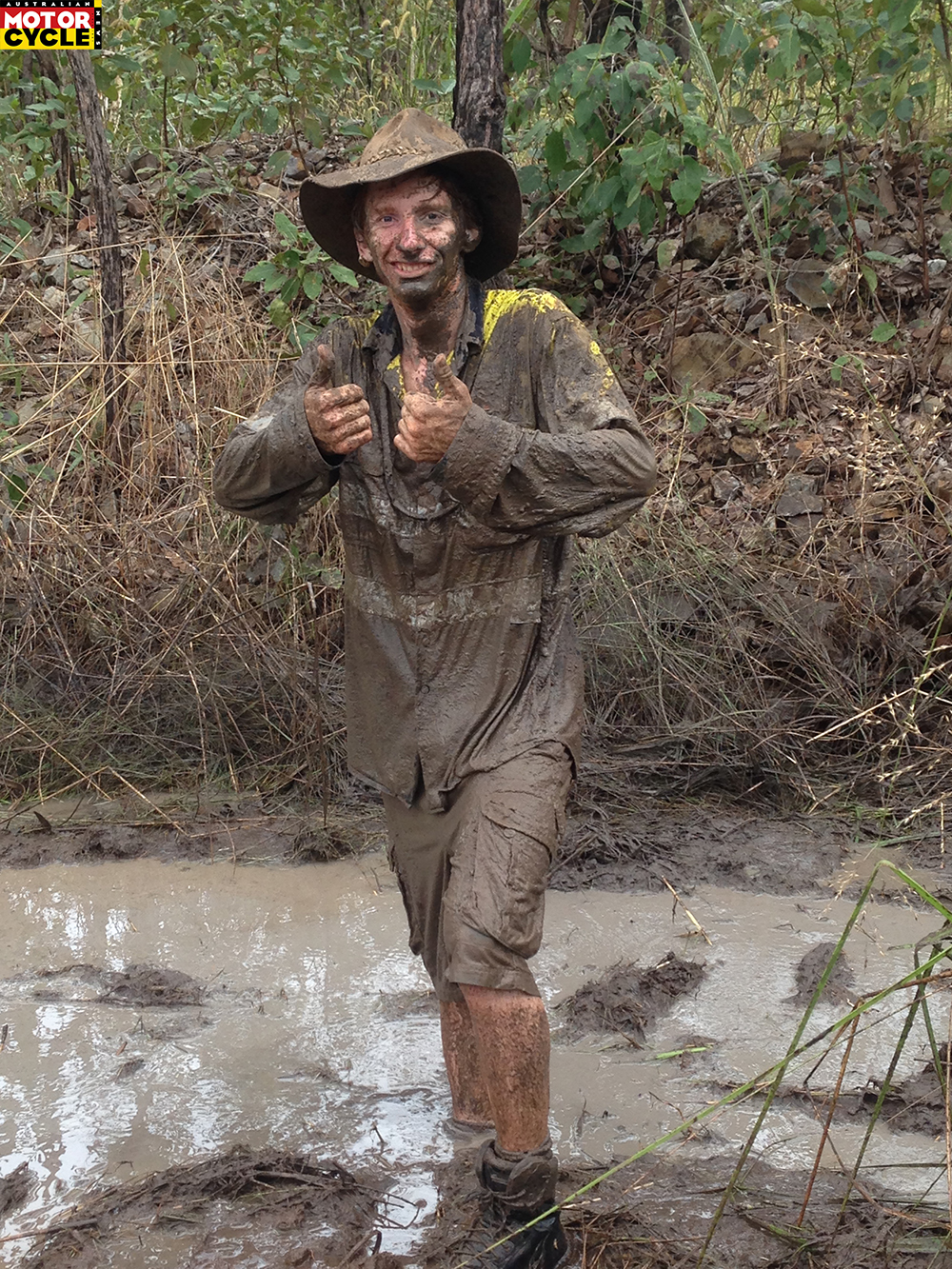 Nathan Evans showed what 12 months of training can result in, by holeshotting the lead and completing the first 12km lap in around 16 minutes. Ayden discovered his Husky was not a submarine, and succumbed to the water. Daniel McInnes also suffered water issues after a great start and failed to finish his second lap. Evans continued to pull away at the front of the pack, however lap times decreased considerably as the back country black mud began to loosen up. Chris Warwick pushed hard, hoping for a third Kamfari victory but running issues slowed his progress and seventh outright was all he could muster. 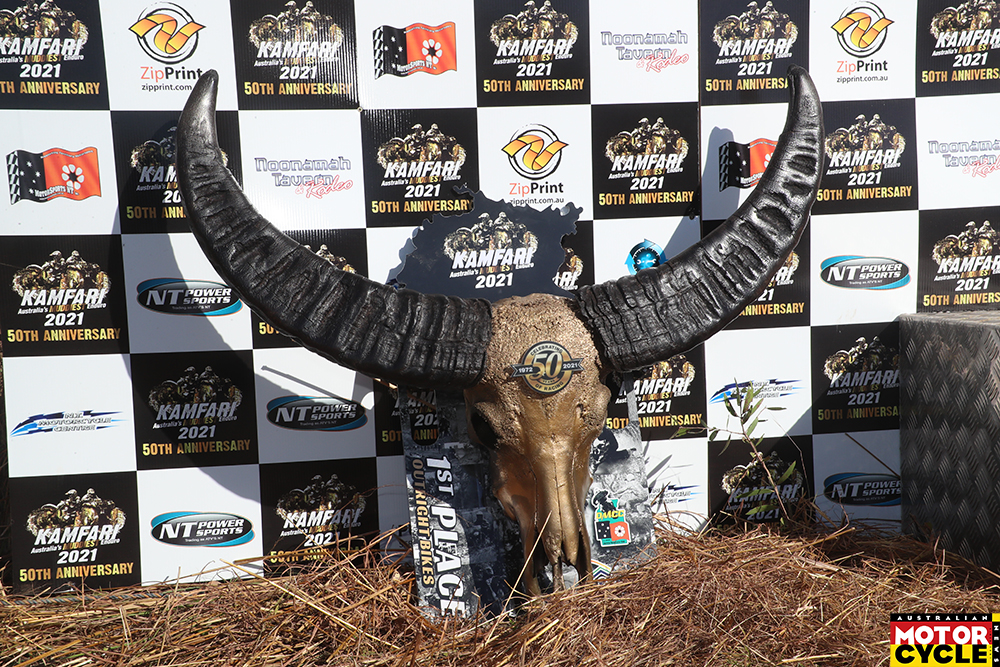 In only his second Kamfari Jed Goold was ready to pack it in on his second lap. Mates advised him he was in third place, so put your gear back on and get out there! Matthew Davis had his YZ running well and staying out of harm’s way but could not catch Evans. That is, until Evan’s KTM expired several kilometres from the pits, ending his dream run. Davis took the lead and kept in front for the final two hours, crossing the line in front of Goold and Phil Peterson. And that’s what makes this event so special; it’s a true test of man, mind and machine. 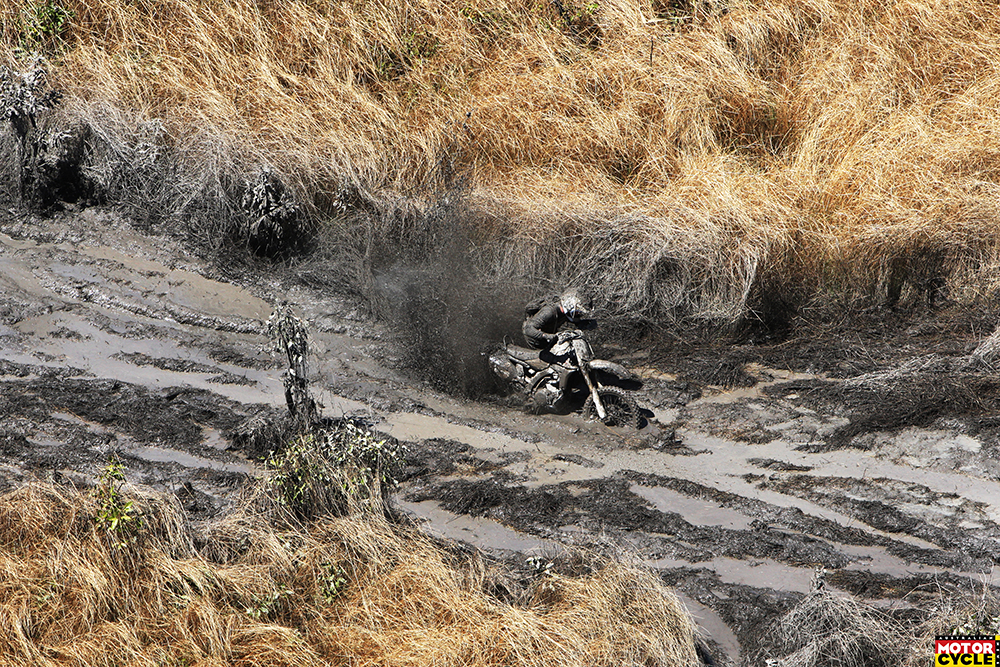