Bautista Powers To Race One Win
A race that started in drama finished in drama, as eventual winner Alvaro Bautista (Aruba.it Racing – Ducati) had to come back from being well behind a thrilling two rider fight between eventual second place fighter Toprak Razgatlioglu (Pata Yamaha WorldSBK Team) and third placed Jonathan Rea (Kawasaki Racing Team).
A superb fightback saw Bautista lose the front, run wide on lap one, and then have to play catch up to Rea and Razgaltioglu all the way until the final corner exit.
The Kawasaki and Yamaha lead riders played a high speed and tense game of pass and re-pass, with Rea tagging his front tyre on Razgatlioglu’s rear on the Parabolica Interior early in the 21-lap contest. 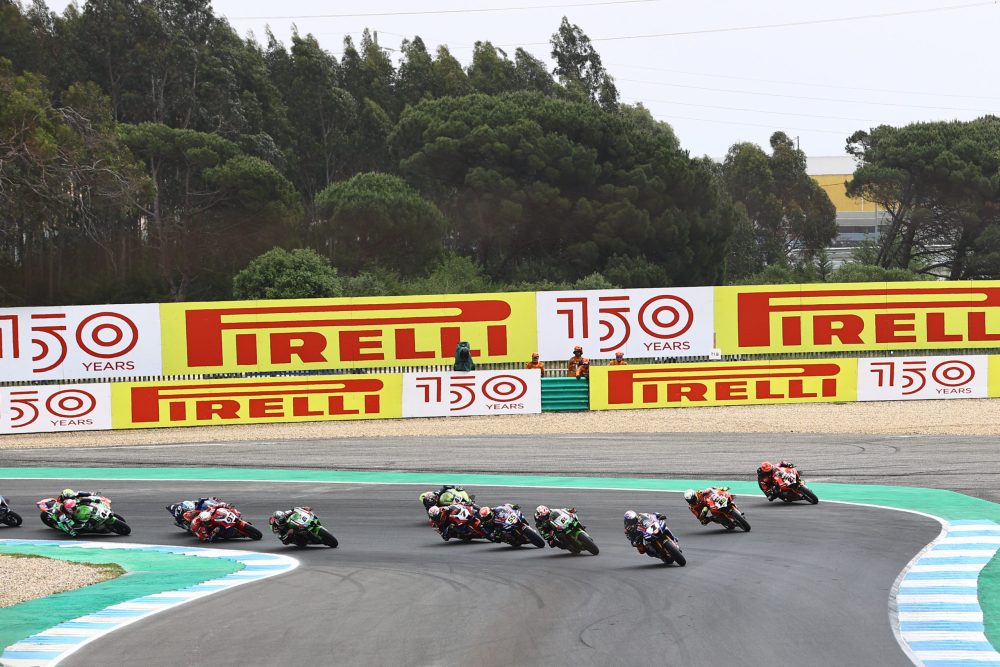 Bautista got past early top three riders Andrea Locatelli (Pata Yamaha WorldSBK Team) and after pulling back time on the leading duo he got close on lap 16. A mistake from Rea, running wide, let Bautista through.
A tense final few laps saw Rea unable to keep his race-winning challenge up after Bautista went into second, but the outcome was uncertain until the final blast down the finish straight.
Bautista had lost time to Razgatlioglu consistently in the last slow sector of each closing lap. A special effort say him close enough to exiting the final corner to blast past a frustrated Razgatlioglu to win, his small physical stature and a strong Ducati engine meant he whipped past Razgatlioglu to win by 0.126 seconds.
On lap four Rea had set a new lap record of 1’36.204. 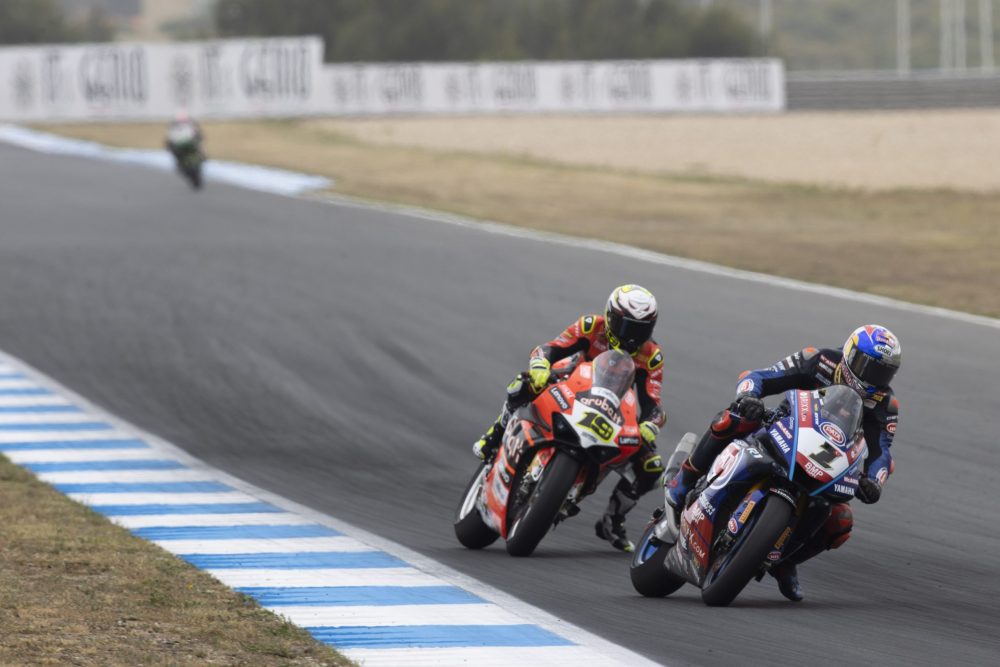 Toprak Razgatlioglu and Alvaro Bautista a 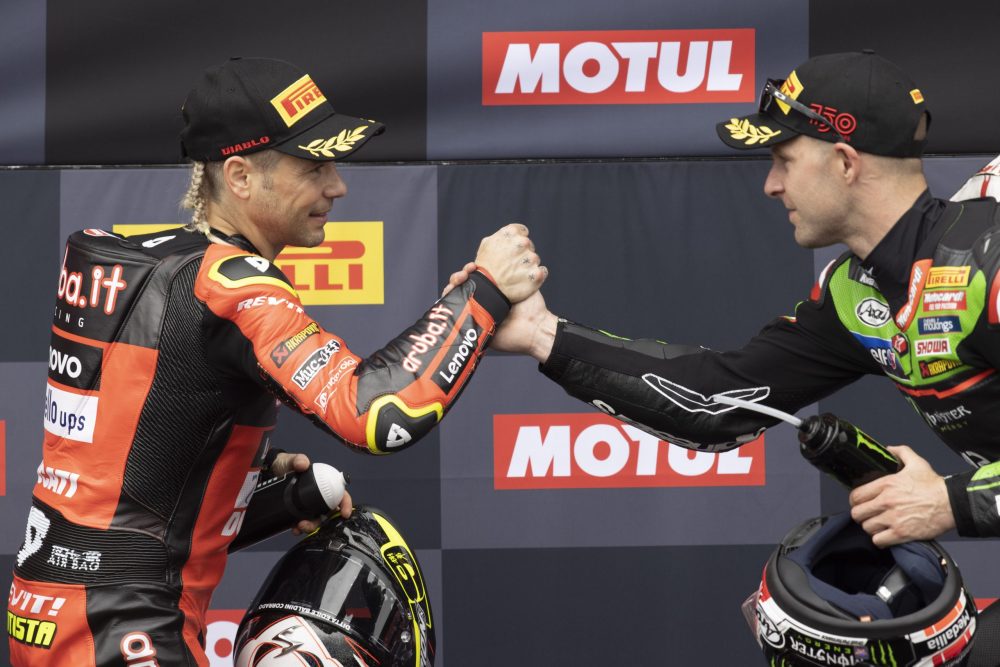 Damp Start Win For Rea
In damp track conditions that ended up almost fully dry, Jonathan Rea (Kawasaki Racing Team) and Toprak Razgatlioglu (Pata Yamaha WorldSBK Team) put on a display of full-commitment riding in a Superpole race that featured two key moments in its ten laps. Both riders were on slick tyres.
Rea passed early leader Razgatlioglu to set up a close contest but when Razgatlioglu repassed Rea under braking they nearly touched and Rea went wide, seemingly gifting Razgatlioglu a race-winning gap.
Entering the slow chicane on the last lap Toprak had a full front end fold that he managed to save, full Marquez-style. 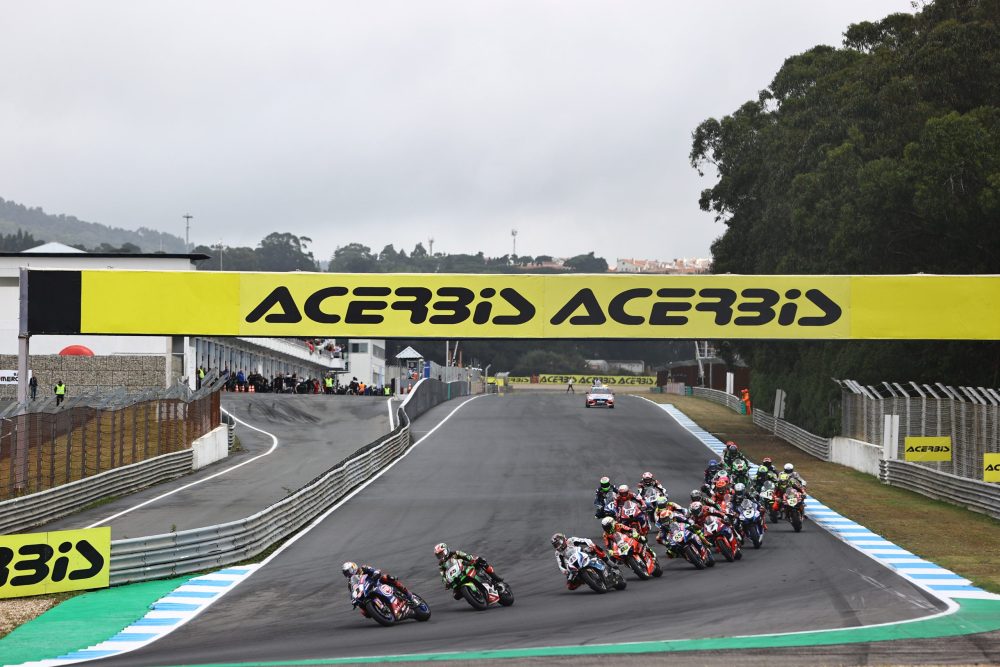 Rea pounced on his change and went around the outside, missing the recovering Yamaha rider by inches as he sept through.
In the final sprint to the line, Rea used his better drive and track position to win by 0.174 seconds.
Razgatlioglu is still waiting on his first win of the new season.
Alvaro Bautista (Aruba.it Racing – Ducati) was third, winning the battle of the Spaniards from Iker Lecuona (HRC Honda). The Honda rider had chosen an intermediate front which worked well at the beginning but as the track dried Bautista eased away from the threat posed by the bike he rode last year. 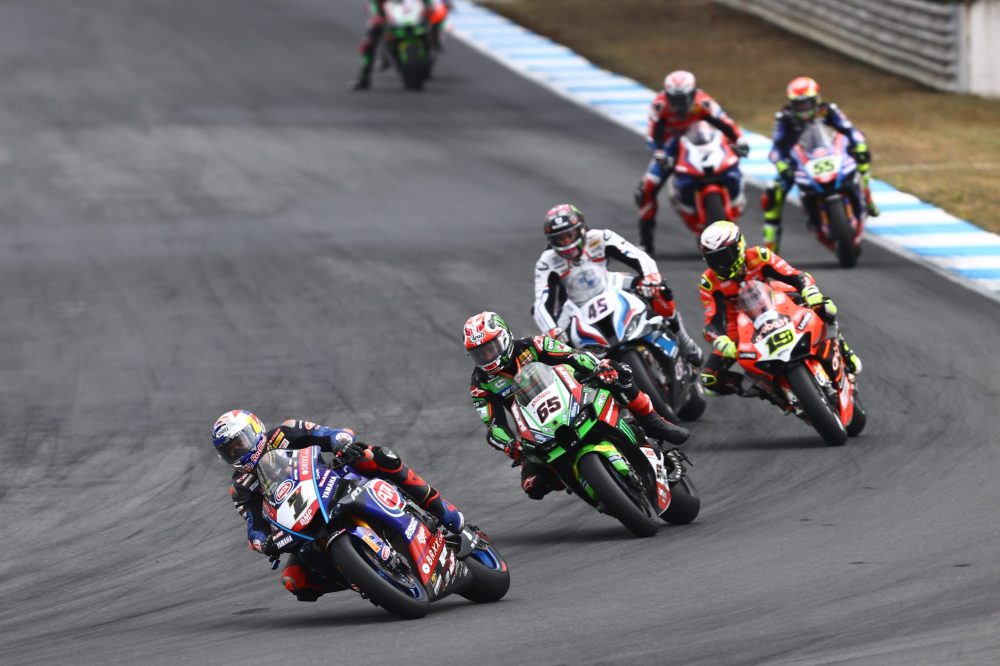 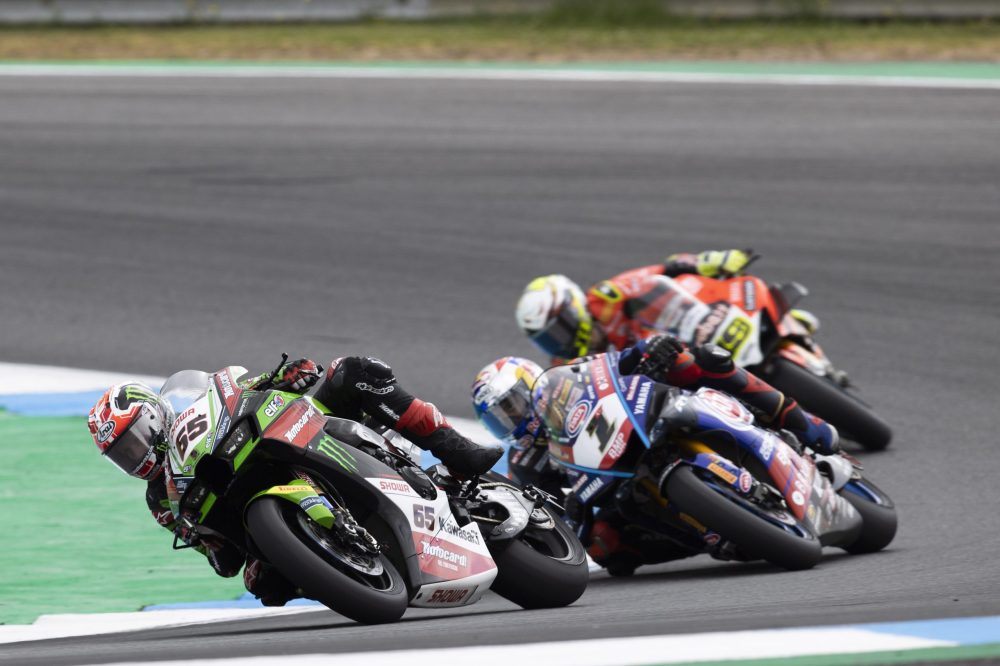 WORLDSBK RACE TWO ESTORIL 2022
Rea Dive Bombs To Second Estoril Win
A show of true determination on the last lap saw Jonathan Rea (Kawasaki Racing Team) take his second win of the final day of racing at Estoril, although he needed two attempts to pass the leader Alvaro Bautista (Aruba.it Racing – Ducati).
A big move inside the V4 rider in the final complex of corners, after Bautista had just re-passed Rea after an earlier attack, gave Rea enough of a cushion exiting the final curve to win by 0.194 seconds.
A four-rider fight for the podium places became a Rea/Bautista battle, finally, with Toprak Razgatlioglu (Pata Yamaha WorldSBK Team) third and the resurgent Alex Lowes (Kawasaki Racing Team) fourth. 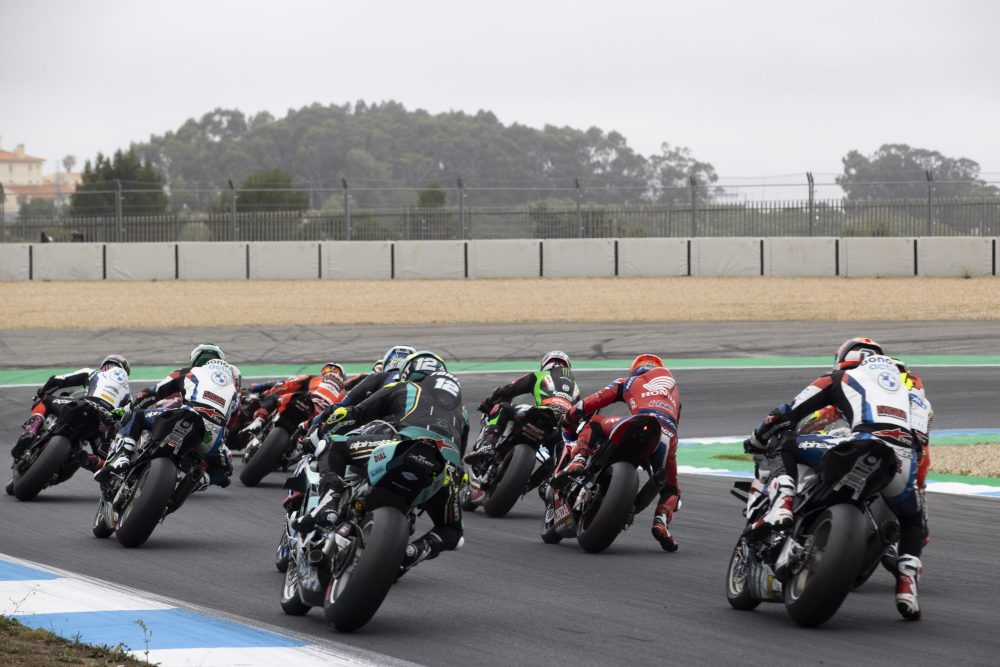 Both of those riders had been well inside the top three fight at times.
Lowes finished a distant fourth, with Andrea Locatelli (Pata Yamaha WorldSBK Team) fifth, and winning a personal battle with Iker Lecuona (HRC Honda). The Spanish ex-GP star had lost his front mudguard shortly before the race began, but was still a strong sixth, just over eight seconds from the winner Rea.
Axel Bassani (MotoCorsa Racing Ducati) made the right tyre choice compared to the Sunday morning sprint race and finished seventh, riding on his own at the flag. 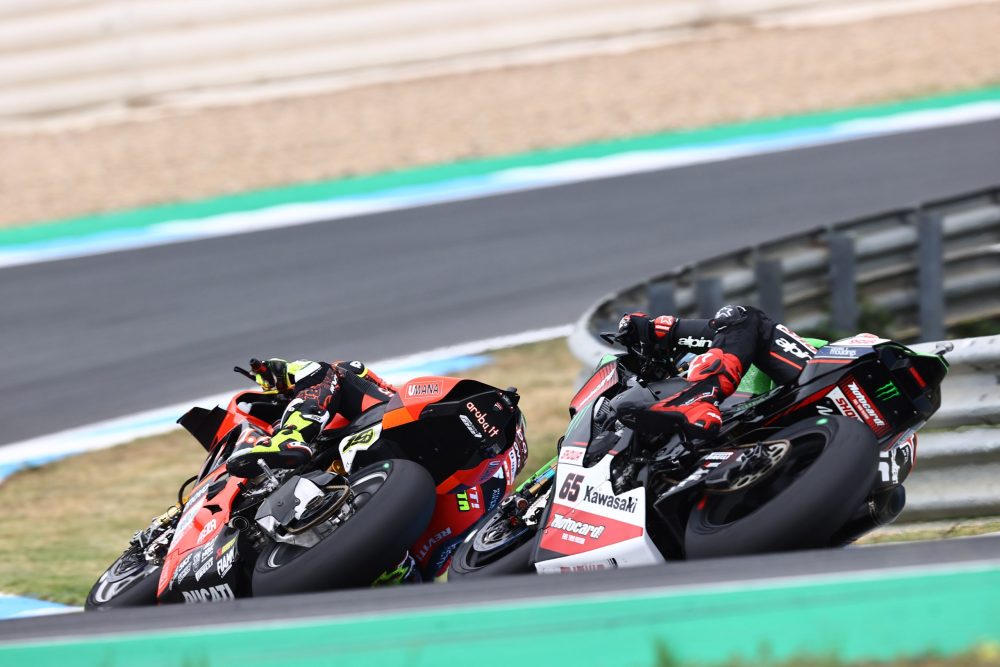 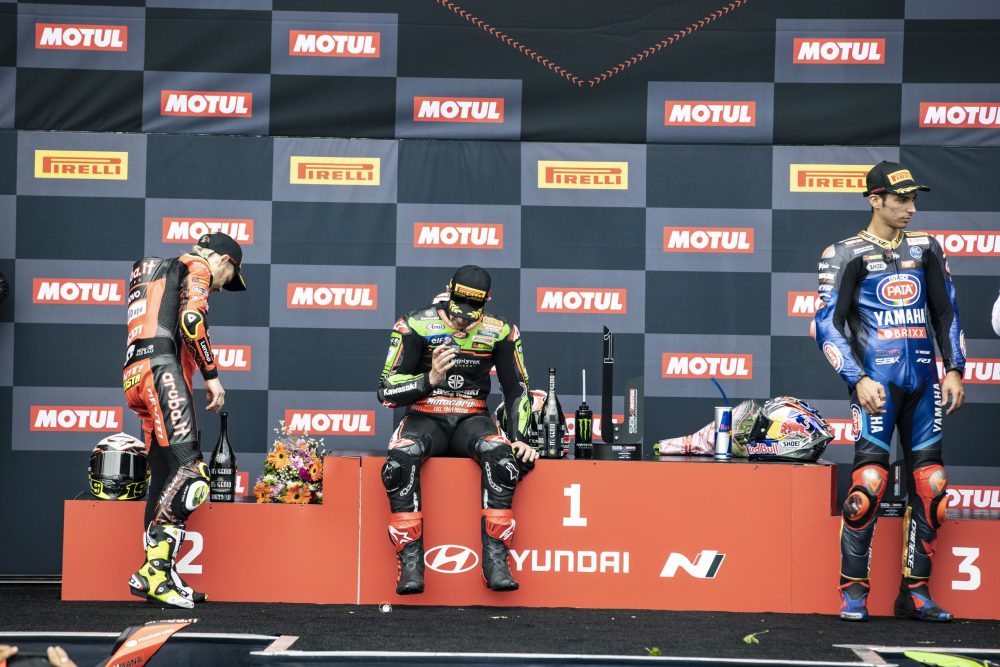 In the championship standings, Bautista has 161 points, Rea 144 and Razgatlioglu 109.
Previous