If you like your motorcycles uncomplicated, inexpensive and fast, then you’re going to love the latest Suzuki GSX-S1000

There’s something delightfully old-school about the 2022 Suzuki GSX-S1000. Sticking to the tried and true recipe of stripping bare a superbike and bolting on a wide upright handlebar, this old-school flavour is carried through in the GSX-S1000’s simplicity and its almost-too-loud ways, and I reckon it’s spot on.

In an era of radar-assisted electronics communicating with lean-angle sensitive rider aids, Suzuki has fronted up with an updated supernaked that prioritises price and usability over the complexities and bragging rights that come with a tech-heavy $45,000 nakedbike. 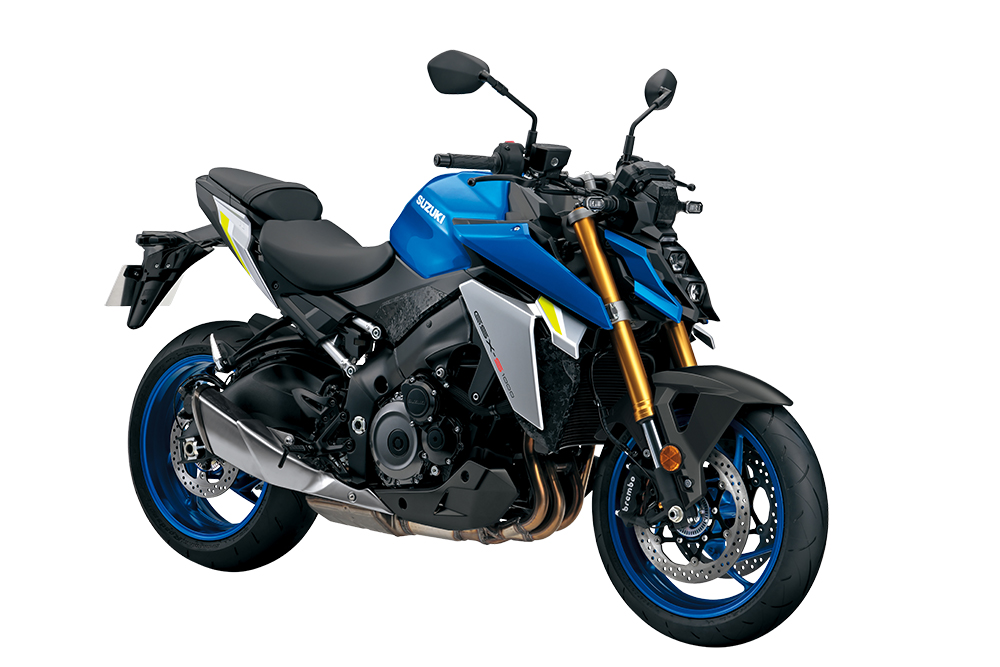 Okay, Suzuki probably hasn’t prioritised those things. But a relatively inexpensive and really useable roadbike is the result, and instead of looking at the latest GSX-S and seeing a lack of development in a market where even aerodynamics are now playing a role, look at it for exactly what it is – and it’s a lot of 1000cc motorbike for not a lot of money. At $17,290 on the road, you can ride away on two and a half GSX-S1000s for the price of one top-spec Ducati Streetfighter. Or you can have three GSX-S1000s and seven grand left over for the price of one MV Agusta Brutale 1000 RR. 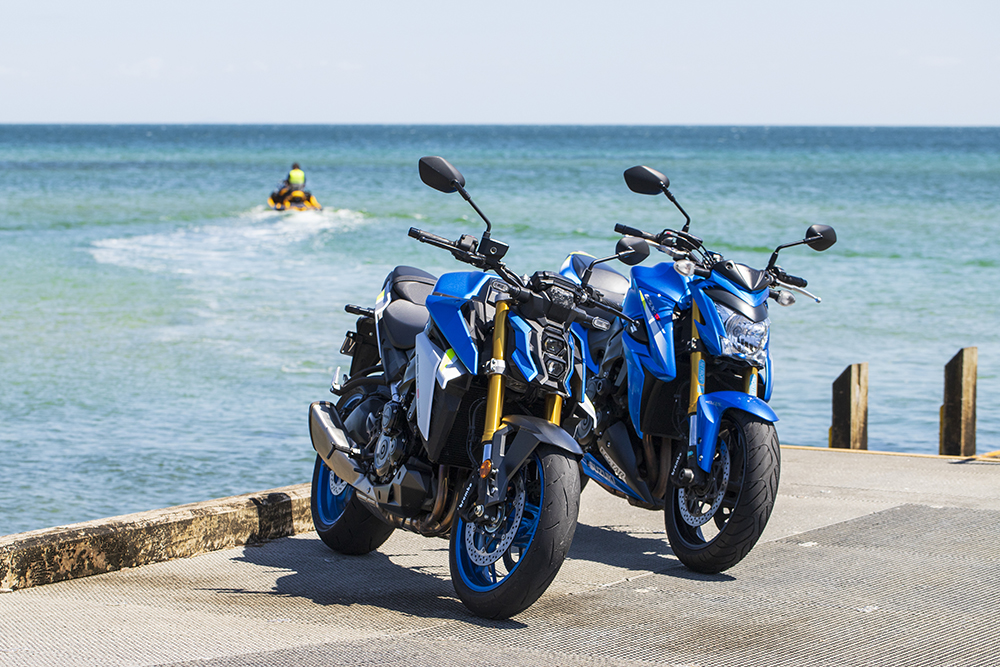 Suzuki has just thrown the first significant update at its GSX-S1000 since its release back in 2015. A mate of mine owns (and loves) his 2016-model GSX-S1000, so I met him for a ride, so we could get a good look and feel for what differences a few years and a couple of grand makes. And as well as the new angular styling, which pitches it a little closer to the look of the relaunched Katana and brings it in line with the new GT version, there’s a range of updates that all add up to improve on what was already a pretty palatable package. 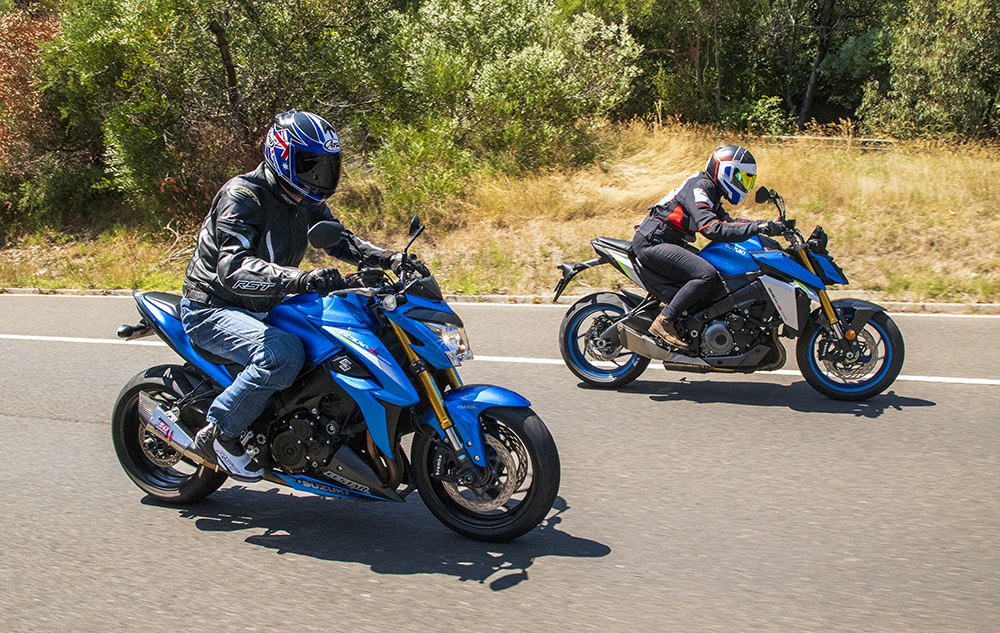 The 999cc inline four-cylinder engine (which isn’t the same variable-valve timing equipped unit found in the firm’s latest GSX-R1000) now meets Euro 5 compliance, though that loud and oh-so Suzuki induction howl will try and convince you otherwise. I don’t like loud bikes as a rule, but this is the best-sounding bike I’ve ridden in ages.

It’s not that the exhaust is loud – that’s also a new unit fitted to satisfy Euro 5 – but that induction noise when you’re up it is a real treat. Maybe it’s my age, but in these days of bland-throated parallel twins, it’s quite a lovely high-pitched reminder of when in-line fours ruled the roads. 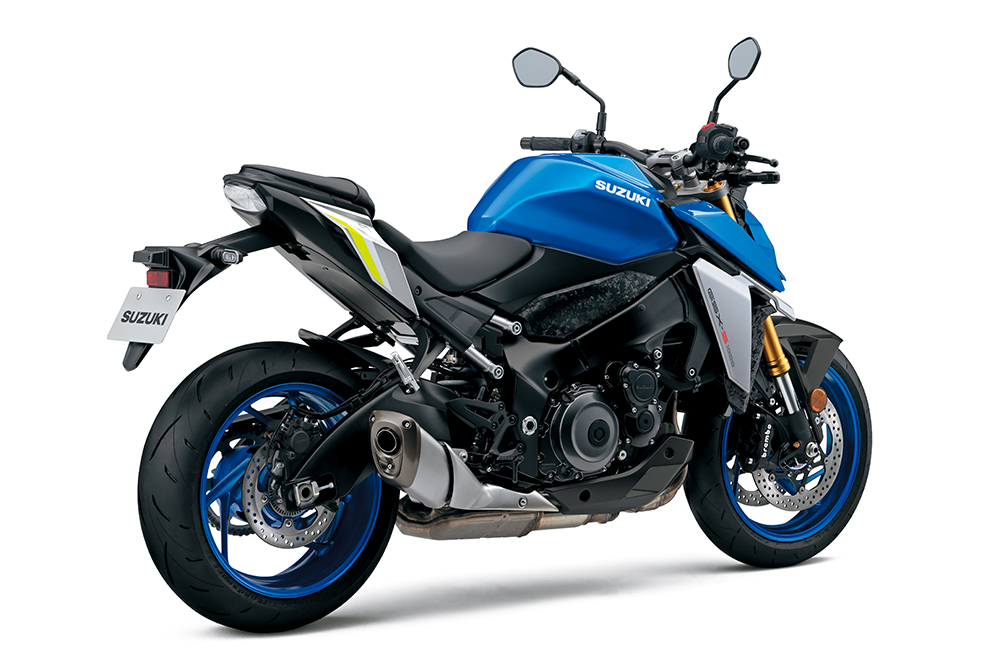 Ride-by-wire finally gets the nod for the GSX-S, which affords selectable ride modes for the first time. There’s three to choose from; A, B or C, but they’re pretty rudimentary. A mode is too snatchy and peaky and it’s hard to think of a scenario where you’d opt for it over the predictable and nigh-on perfect response of B mode. Likewise, C mode softens throttle response a little too much and you can’t help but think the modes are only there because it’s what a customer expects these days. There’s a new five-way adjustable (on the fly) traction control system to keep things in line when the conditions become sketchy – there was only three levels of adjustment previously – and I would have much preferred the addition of cruise control to complement the electronics package rather than two additional modes most people will never use. 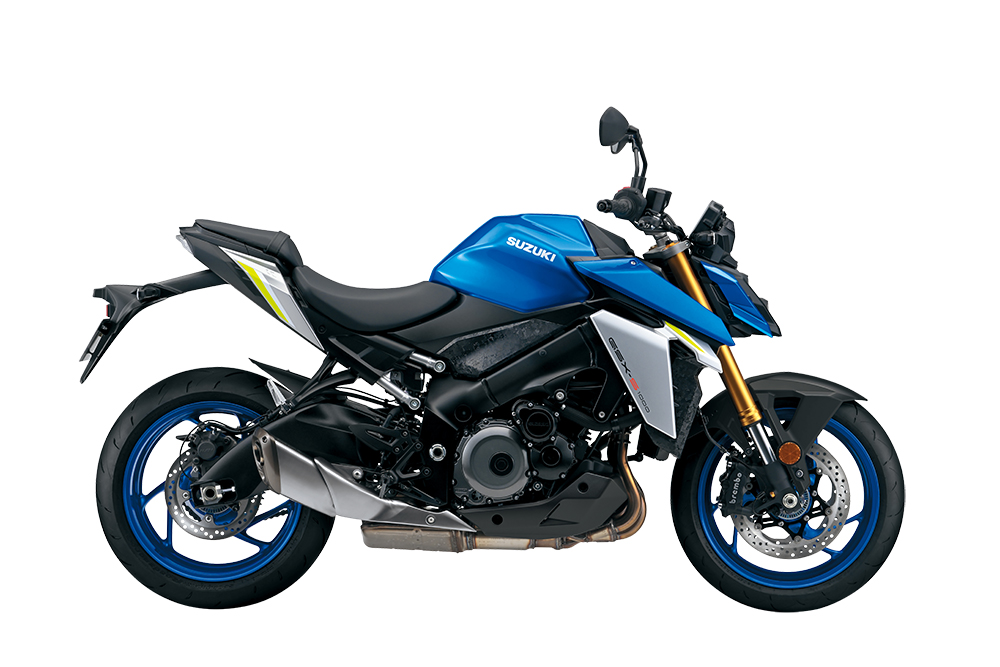 The so-called updated LCD dash is from the Katana and, while that Atari-blue-on-black LCD display worked for an 1980s-inspired remake, there’s really no excuse for an overcrowded hard-to-read dash in 2022, not on a bike like this. Its price would maybe justify the omission of an OEM quickshifter, however, but Suzuki opted to throw a two-way unit on the GSX-S and it’s the best I can remember using from a Japanese factory. Up or down, at any speed and at any revs, it’s silky smooth and even boasts an auto blipper for downshifts. So full marks there. 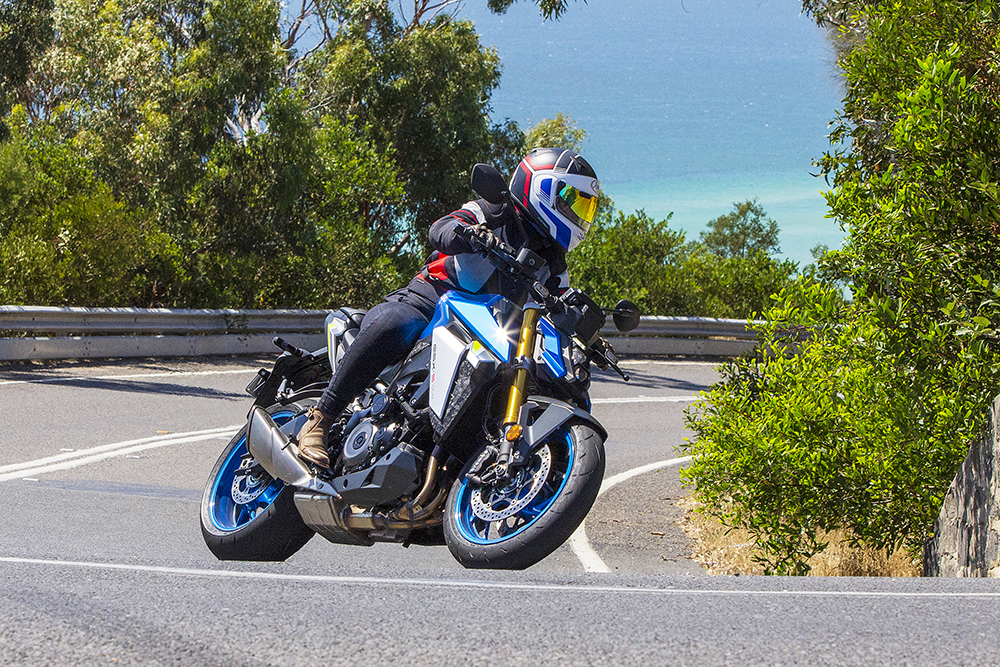 Thanks to the hoops Suzuki needed to jump through to achieve Euro 5, weight is up slightly and peak torque is down compared to the previous model (though peak power gets a little boost), but when you compare the two torque curves, there’s more of it in more places. Sure, the spike doesn’t peak as high, but there are fewer dips all the way along the curve, too, which actually means there’s more torque more often. 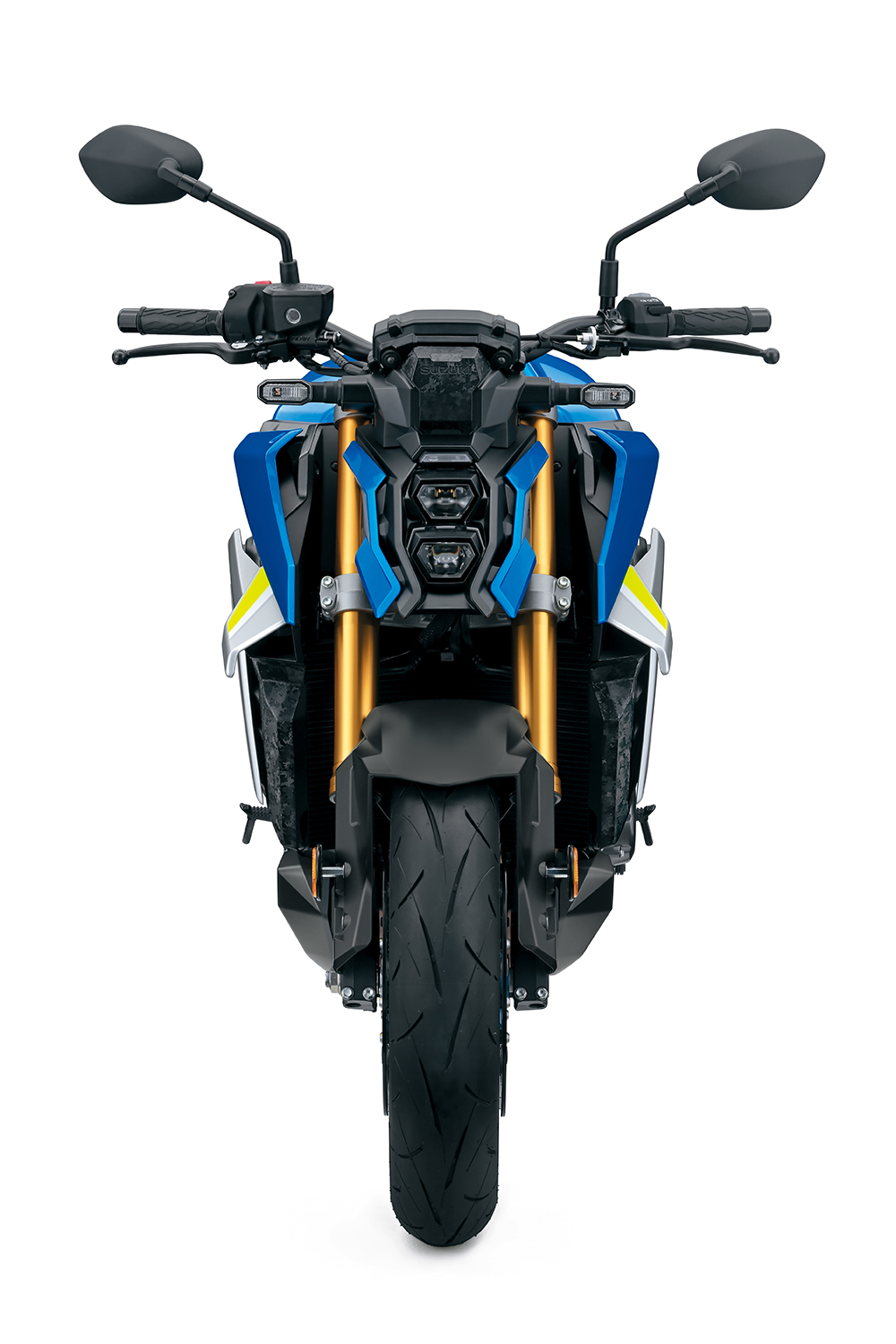 And it feels like it – this thing is quick – and unlike most inline-fours where you have to be in the right gear or rev band to accelerate immediately and quickly, the GSX-S feels happy to get up and go whenever you please. In fact, that torque is so usable, you could be forgiven for thinking it is a triple.

And because of that, it’s a heap of fun to ride. Like I do whenever I get a new bike delivered, I ride the same short-ish loop to get a feel for it before I dive into its information and specs ahead of much longer test rides further afield. Though what’s normally a 20-minute loop turned into an hour-long ride simply because I was really enjoying what’s a comfortable, great-sounding and torquey four-cylinder 1000cc naked. The last naked inline-four I rode was BMW’s S 1000 R just a month or so ago, and while it’s an amazing motorcycle in its own right, it just asks so much more from you as a rider. There’s a simple effortlessness about the Suzuki that tech-heavy bikes just don’t have. 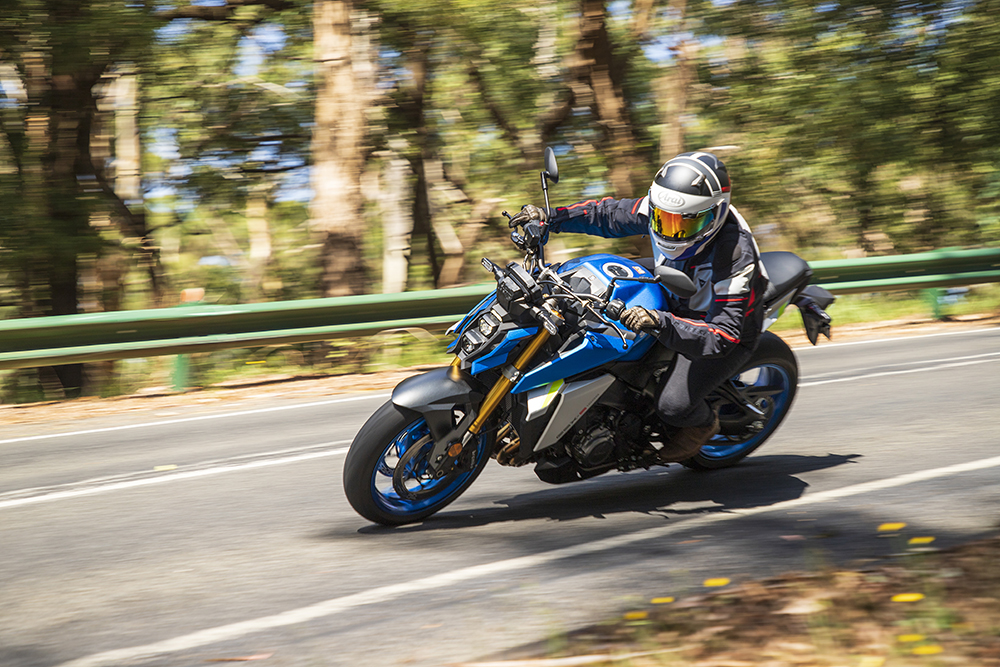 Its overall ease is probably aided by the new bike’s revised ergonomics. The one-piece handlebar is higher, wider and a little closer than before and the well-padded seat has been redesigned to complement the new ergos. There’s plenty of room to move around and it puts you in a really natural riding position, just like a supernaked should. And even though the pillion perch is slightly smaller than before, thanks to the narrower tail section, its ergonomics are comfortable enough for decent-length rides, too. And including a hook on the top of the pillion footpeg stays to provide a point to tie some luggage down to gets a few extra marks from me.

As does the one-litre larger tank. Perhaps a byproduct from the new angular styling rather than something the factory set out to achieve, a larger tank is almost unheard of in this genre these days and it’s something that every rider would welcome. I averaged 5.7L/100km, which means you’ll be looking for a servo at around the 300km mark. 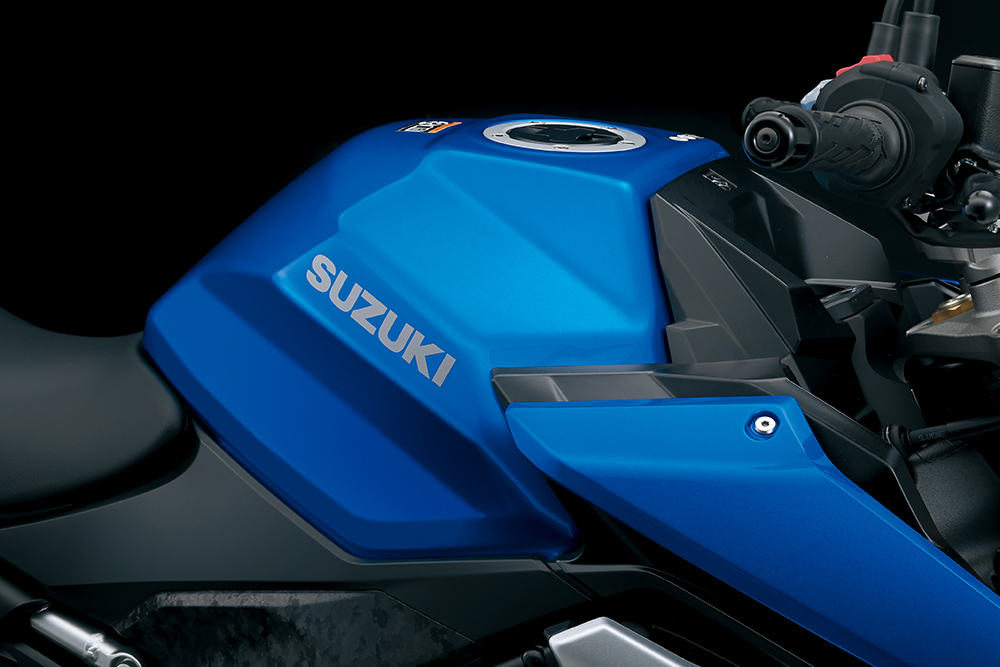 But you might be surprised how quickly it comes around. The twin-spar aluminium chassis comes from good pedigree and the swingarm started life in the firm’s GSX-R1000 superbike so there’s little surprise that there’s heaps of feedback coming at you about exactly what the bike’s doing on the road. The new Dunlop Sportmax Roadsport 2 tyres are great when they are warm, but they did take a bit more time than I’d like to get up to working temperature. The rear let go on me a couple of times early on in rides (and the traction control system kept things in check) but the Dunlops offer good grip once they are warm. 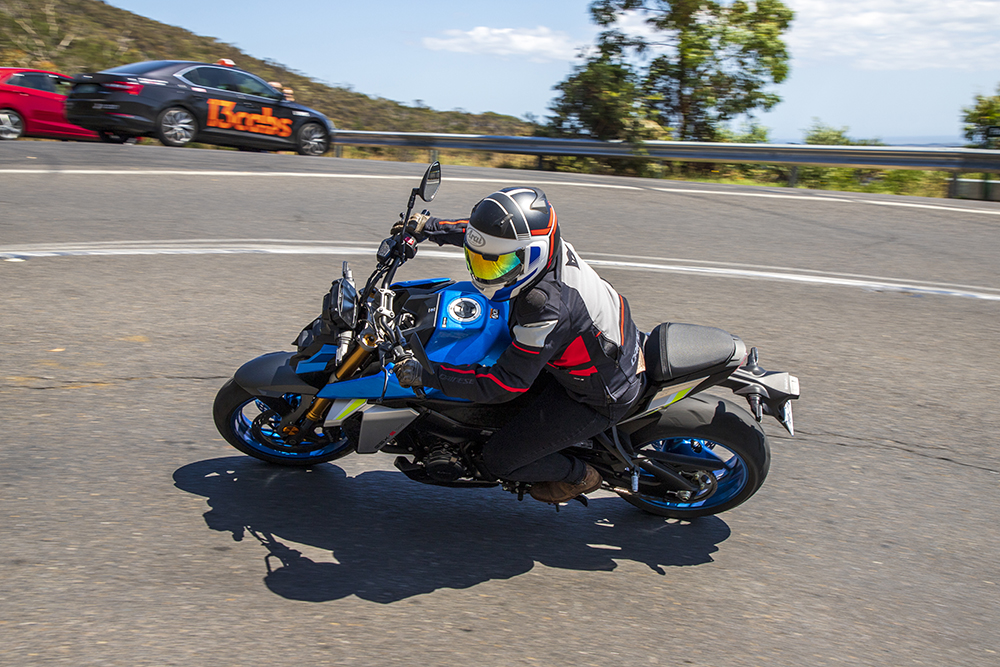 If the base settings were good, you wouldn’t blink at a limited suspension adjustability on a bike of this price point, but there’s a fully adjustable 43mm upside-down KYB fork at the front and an adjustable link-type monoshock looking after the rear. Suzuki enquired about my weight ahead of me taking delivery of the bike in order to sort a decent base setting for my 64kg frame and while I found the set-up still quite firm for moseying around town, it was spot on for quicker jaunts on the open road. 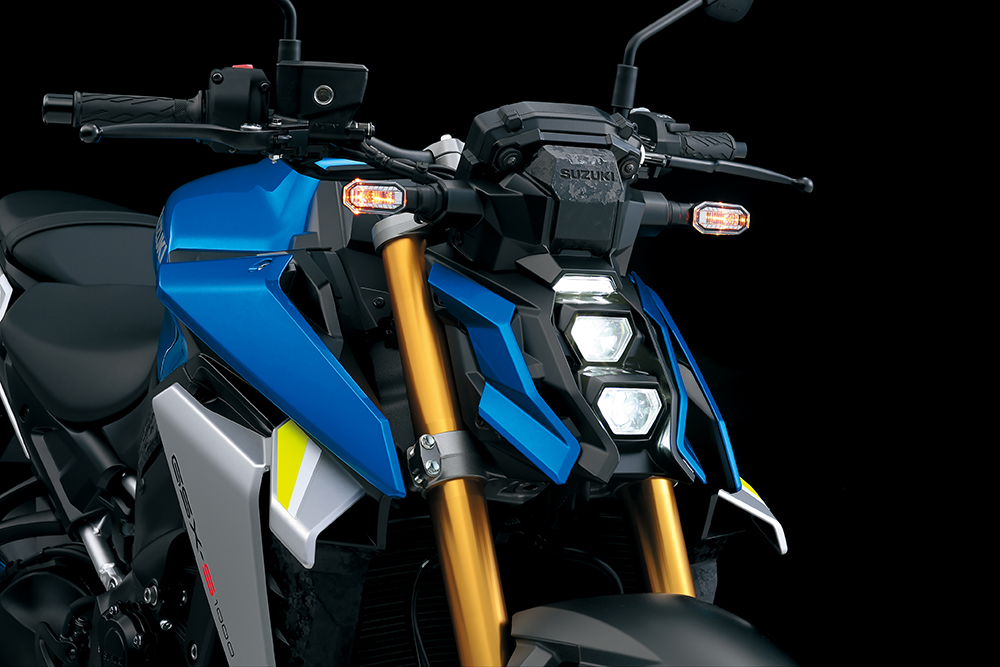 The four-piston front Brembo calipers biting onto a pair of 310mm discs are carried over from the previous model and do a superb job of pulling up the 215kg machine. The rear doesn’t have a heap of power but is useful for settling things down through sweepers, and when used with the front provides more than enough stopping power for a bike like this. There’s ABS, of course, but with nothing in the way of showy tech, like the traction control, it’s a conventional system. 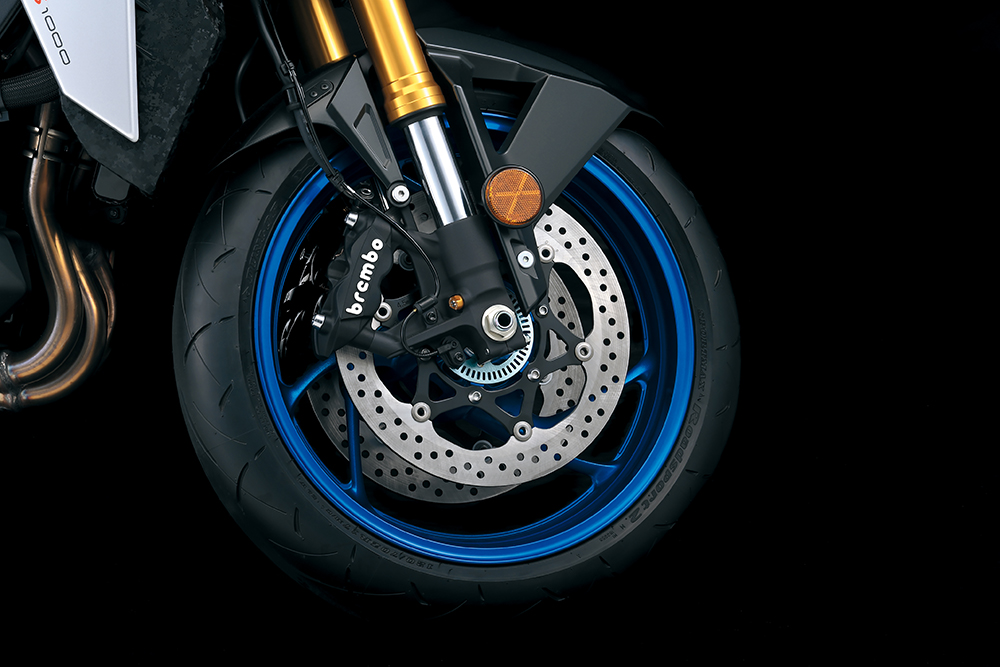 I really enjoyed my time on the latest GSX-S1000, but there are things I didn’t like. I want, and expect, cruise control on a MY22 1000cc machine these days and those modes in their current state of tune do feel a little bit tokenistic. The still-LCD dash is difficult to read, that headlight design isn’t for everyone and don’t even get me started on that camouflage pattern printed into the bike’s black plastic. To me it looks like I confused my bike wash with my hydrochloric acid and I can only assume it’s not going to age well. 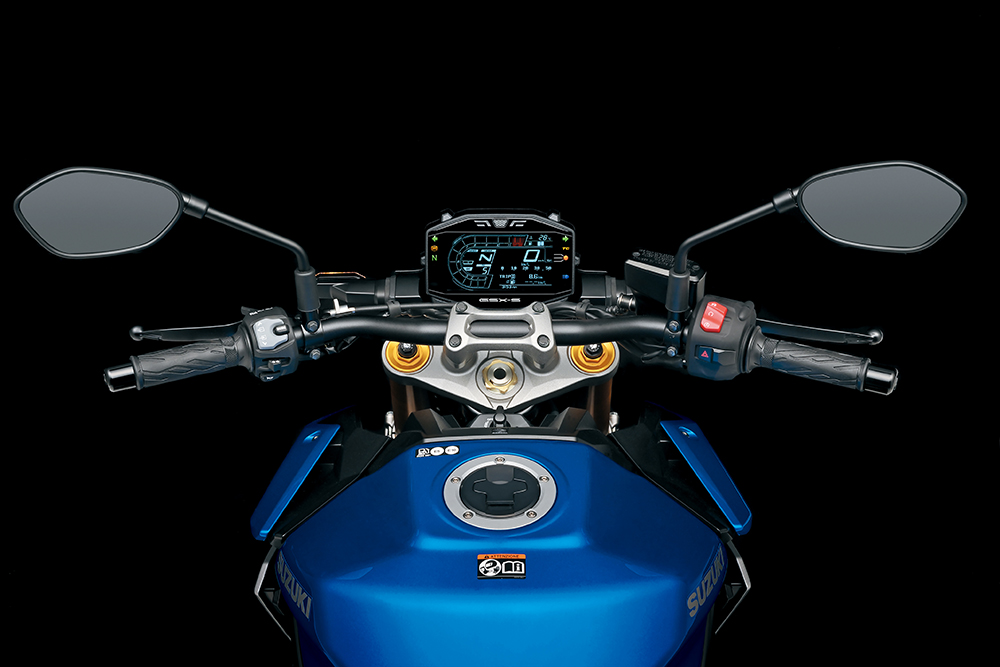 But that can’t be seen once I’m on the bike and rolling. And once I’m doing that it doesn’t matter a jot, because the new GSX-S is a hoot to hoon on. Or commute on, or whip to the shops on or even tick off a few hundred highway kays on. Aside from the price, I reckon the GSX-S1000’s simplicity is its strongest point. But that won’t last forever – look closely at that blank flat square between the front indicators and tell me there are no plans for radar.

If a quick, comfortable no-nonsense four-cylinder motorbike is your bag, you’ll be hard pressed to find one better than this. 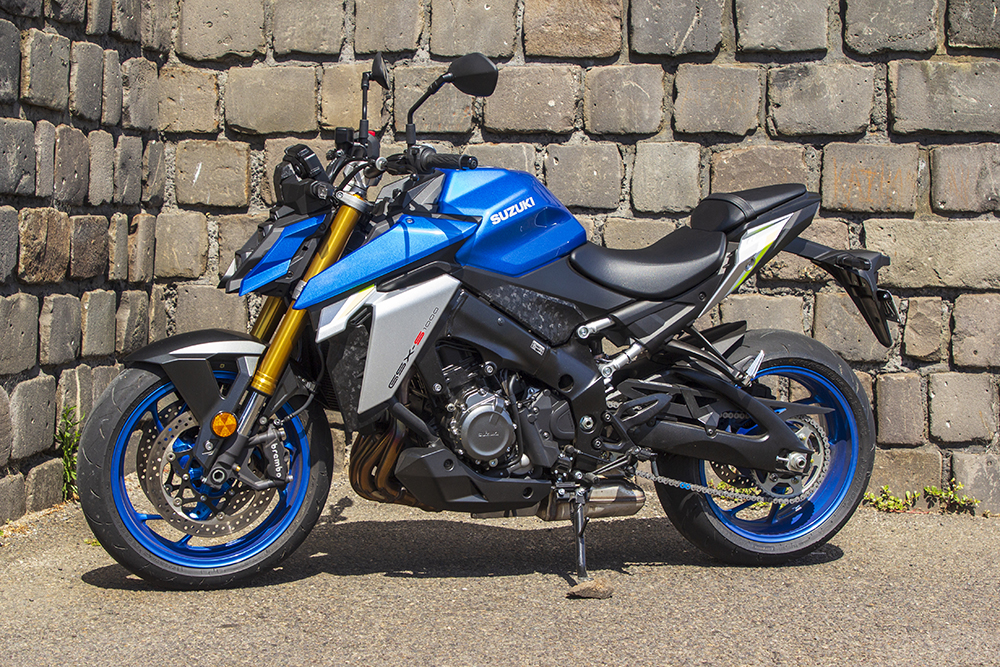 When the offer came to try Suzuki’s new GSX-S1000, I jumped at the chance. As an owner of a 2016 model, I know a fair bit about these bikes and was keen to see if Suzuki had managed to make many improvements to what I know is a very good motorcycle.

The ride-by-wire throttle works well, allowing the addition of a quickshifter/blipper that is smooth to use when matched to one of the best gearboxes in the business.

The changes to the controls move the ’bar higher and closer to the rider, allowing the rider to be more upright, plus those wider ’bars provide even more leverage to help the bike flow through the corners when the pace quickens. And the traction control system now provides greater adjustability, offering five levels of refinement compared to the old bike’s three.

Styling is always subjective, but trust me when I say the new bike looks better in person than it does in pictures. The stacked LED headlight may be confronting to the eyes but it throws a really excellent light for night riding – I do a lot of night-time commuting and the new light improves vision significantly. 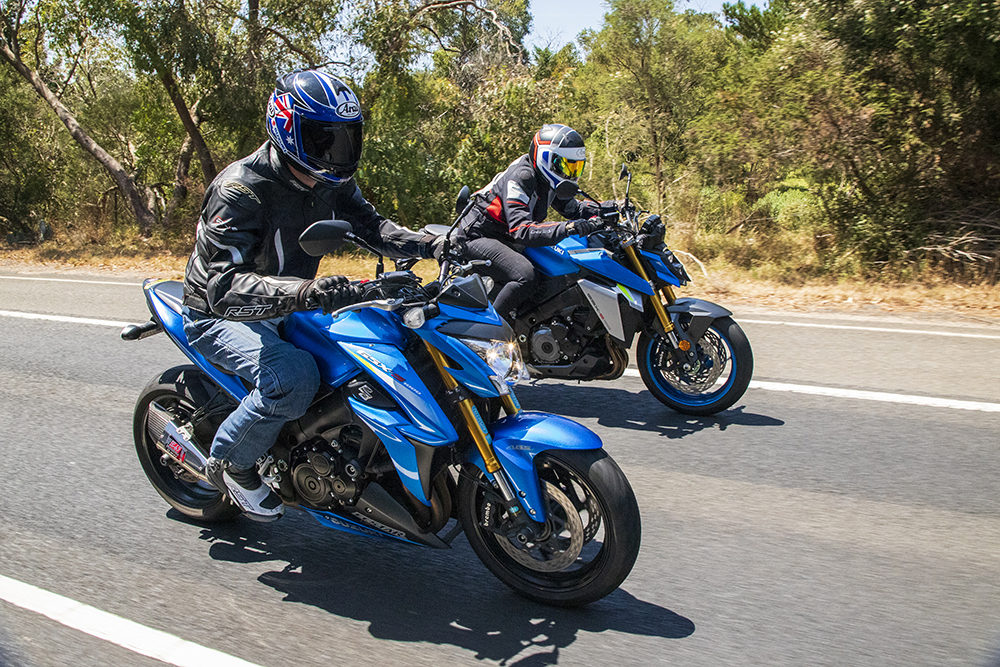 The dash is very busy and can be difficult to read when riding during the day, and it doesn’t seem bright enough to be clear to read on sunny days. That said, when the light is fading, it becomes a lot easier to read. And there is plenty of information offered on the dash.

I wanted to use the new GSX-S in the same fashion that I use my personal bike. From commuting 600 kilometres a week, to heading into the hills on a sunny Sunday or ducking to the local shops to give the GSX-S the opportunity to prove itself as an all-round package. And it excelled at every task it was given.

Suzuki does evolution better than most, and in this case it has evolved the GSX-S1000 into an even better roadbike at a price that is still hard to ignore. It has taken all the strong points of the previous model, and complemented them with technology focused on lifting the perceived weaknesses of the old bike.

Well played, Suzuki. If I hadn’t spent a bit of coin getting my bike set-up to suit me and the type of riding I do (see annotations), I could almost justify an upgrade. 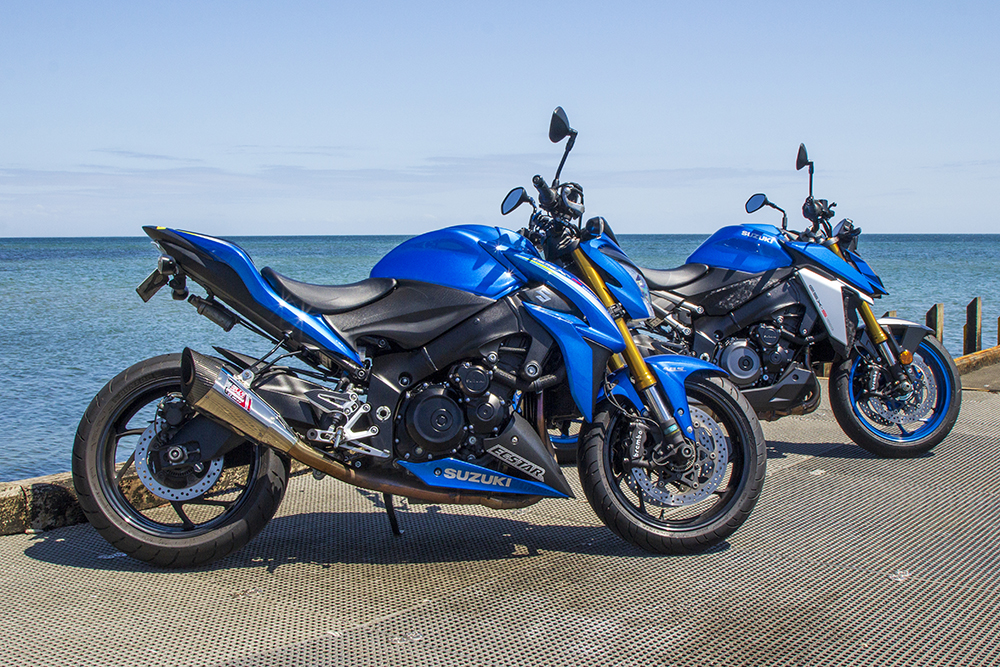