Harley has left the Sport Glide off the updates list since 2018 and that’s both good and bad.

Back in 2019 Harley-Davidson Australia invited AMCN to take its all-new Softail range for a fang around Eastern Creek – better known these days as Sydney Motorsport Park. Granted it’s a strange place to test Harley’s but it certainly highlighted how much better the new Softail platform was compared the previous generation. Although all models were better than their predecessors there was one bike that really stood out for me and that was the Sport Glide – a new model released in 2018 along with Harley’s new FDXR which was getting the lion’s share of publicity. I liked the look of the Sport Glide for the most part, but what made it stand out was how much fun it was to ride around SMSP. 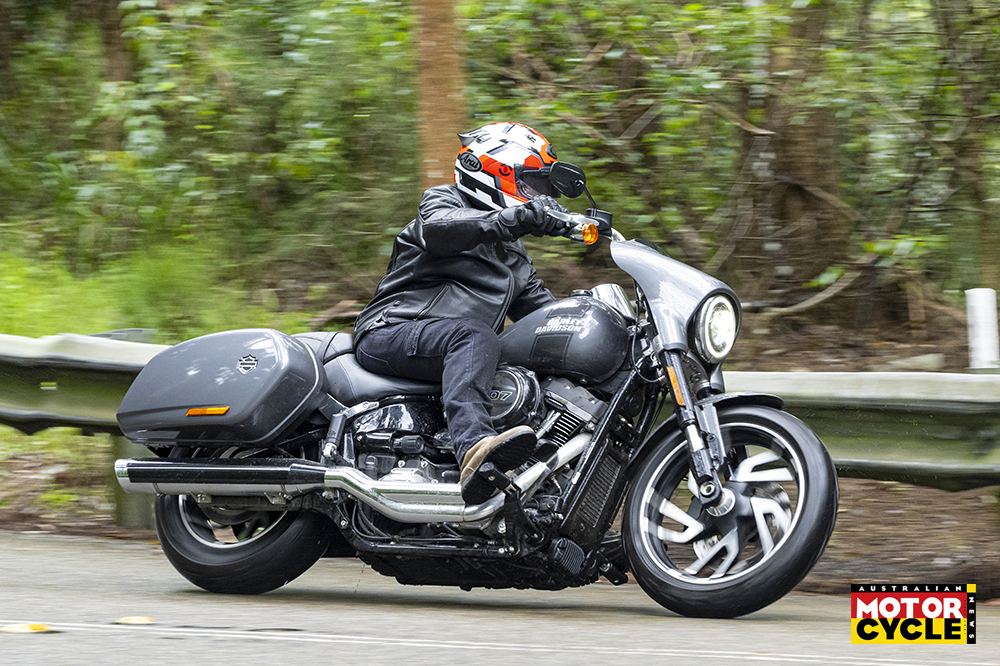 It may not look it on the specs sheet, but Sport Glide is an appropriate name when compared to the other cruisers in Harley’s cruiser range because it’s quite a capable steerer despite its forward controls, average ground clearance and portly dimensions and it was my favourite bike of the Softail range.

But for the four-years the Sport has been left off Harley’s update list and the 2022 version is unchanged from the model released in 2018. The entire cruiser range is now fitted with either the 114 or 117ci Milwaukee-Eight twin except for the Sport Glide and the Softail Standard and the latter is $6755 cheaper so fair enough.

Having ridden 114ci and 117ci versions of the Milwaukee-Eight the 107 feels a sluggish and sedate in comparison. That’s not to say that the 107ci is slow or gutless, it’s still a 1745cc V-Twin packing 61 kW of power at 5020 rpm and 139Nm of torque at just 3500rpm. But it’s giving away 10kw of power and 29Nm torque to the 117ci Milwaukee-Eight and 107ci that was once enough to punch the excitement buttons when riding the Sport Glide now seems sleepy compared to models sporting larger capacity M8s.

Squirt from the 107 is channelled through a typically clunky but reliable six-speed gearbox with belt drive getting the mumbo to the rear wheel. I’m still waiting for Harley to add clutch cable adjustment at the lever rather than having it located on the front downtube. Like so many Harleys I’ve ridden the clutch drags ever so slightly, making find neutral an infuriating chore and there’s never enough external cable adjustment available to tune it out. 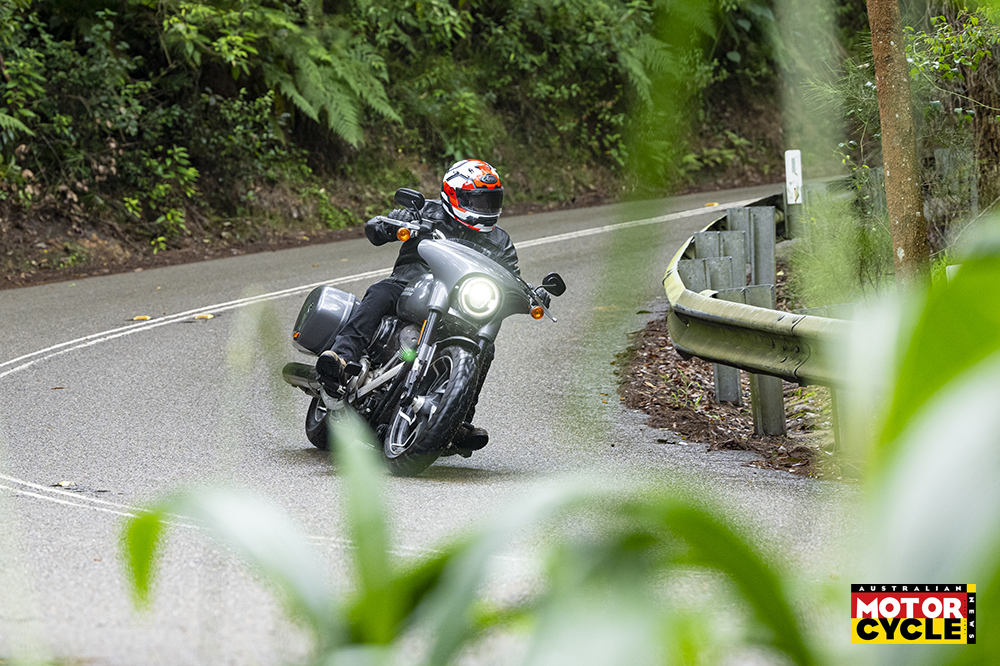 Combustion gases exit through a two into one exhaust that sounds crap. No one really cares because like tissues, modern music and the Morrison liberal government the standard exhaust should be promptly discarded and forgotten about.

The Sport Glide has stood the test of time in the handling stakes better than its powerplant has. That should be no surprise as it runs the same tubular steel frame with rectangular section backbone as the rest of Harley’s cruiser range and the frame hasn’t changed since 2018. 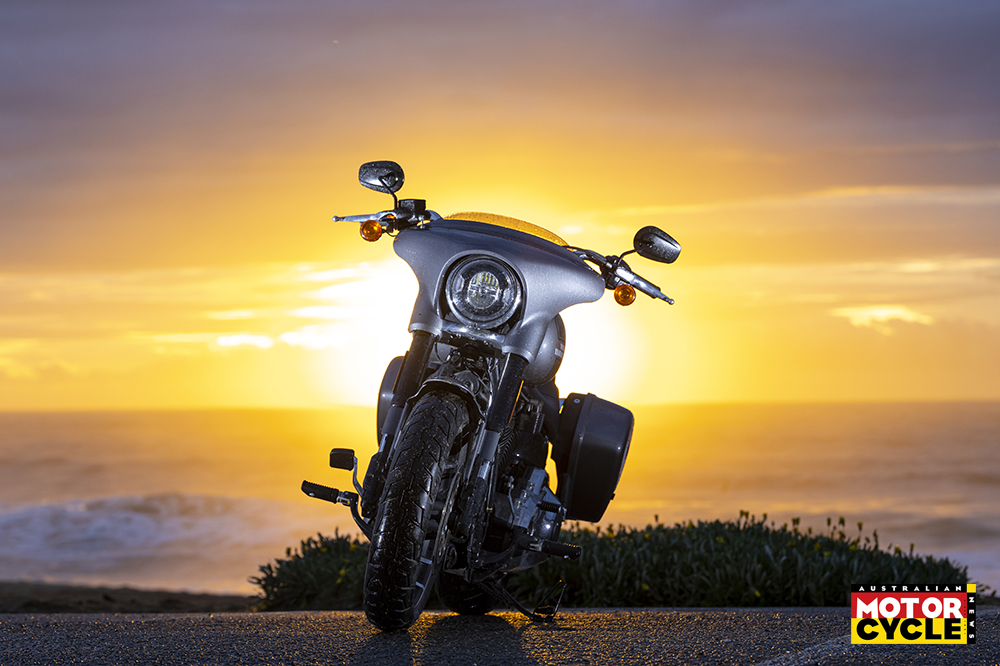 You’ll find a set of non-adjustable 43mm USD forks up front with a similar spec to that used on the marque’s Fat Bob and Low Rider S and the same preload adjustable Showa hidden monoshock you’ll find on the rest of the range.

The Showa front forks work just fine, adjustment would be nice to have but for your average rider doing cruisery things it’s not needed, and Harley’s standard setup is bang on the money front and rear. The rear end preload adjustment can be tinkered easily thanks to a remote preload adjuster situated below your right arsecheek and came in handy when I needed to compensate for the camping gear I lashed to the Glide for a weekend camping trip. 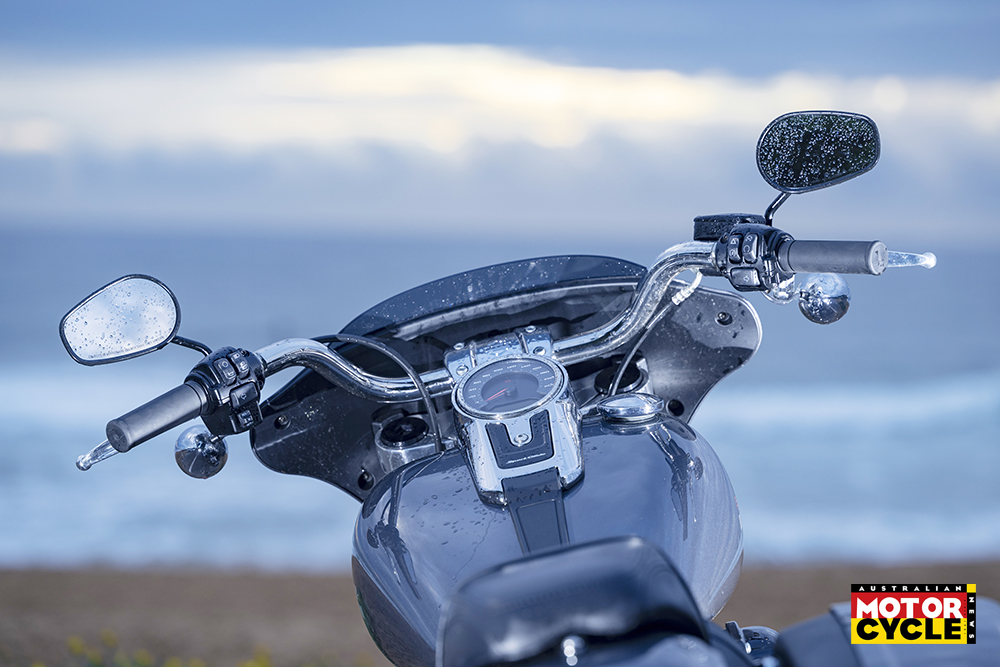 As it rolls from the factory the Glide sports a single 300mm front disc with a four-piston caliper, that, in normal riding mode goes ok. Anyone used to single disc front Harley’s knows that they have the feel of a wet cork sanding block and the Sport Glide in no different, but the outright power is there to pull up the 317kg rig when you’re cruising around town which is where a cruiser like the Glide is meant to be. 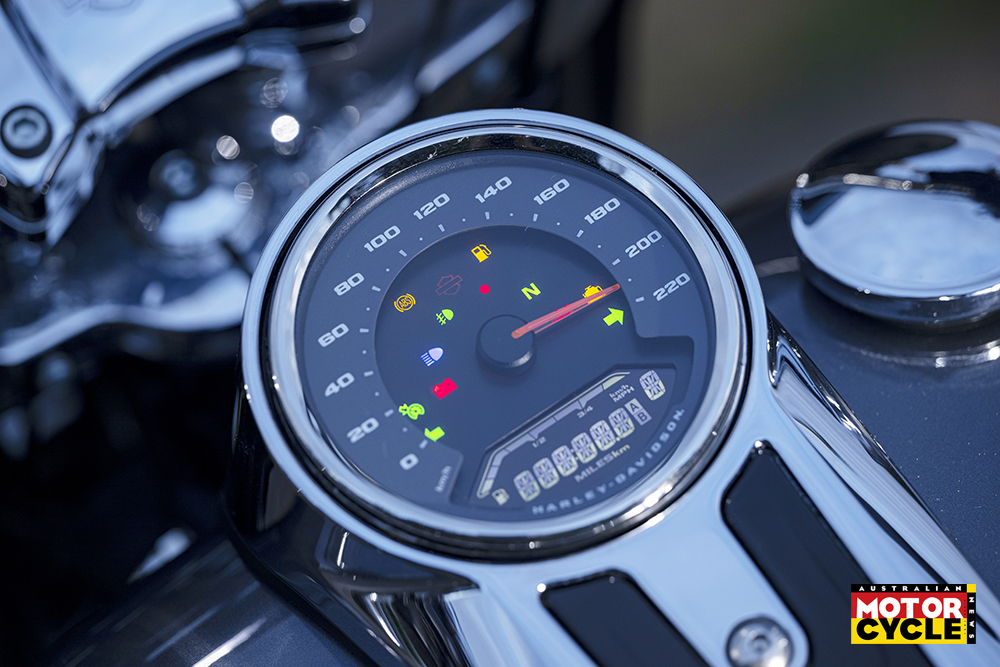 As you’re speed increases though the Glide struggles to pull you up in a way that’s akin to most modern bikes I’ve ridden. I love Harley’s but Milwaukee coloured glasses aren’t enough to overlook how scungy the front brakes are by 2022 standards.

The rear sports a 292mm disc gripped by a twin-piston caliper and like most Harley’s I’ve ridden it’s damn near perfect – heaps of power and bucket loads of feel and perfect for pulling a heavy beast around a tight turn or just navigating the lane split home without taking out some poor saps mirror. 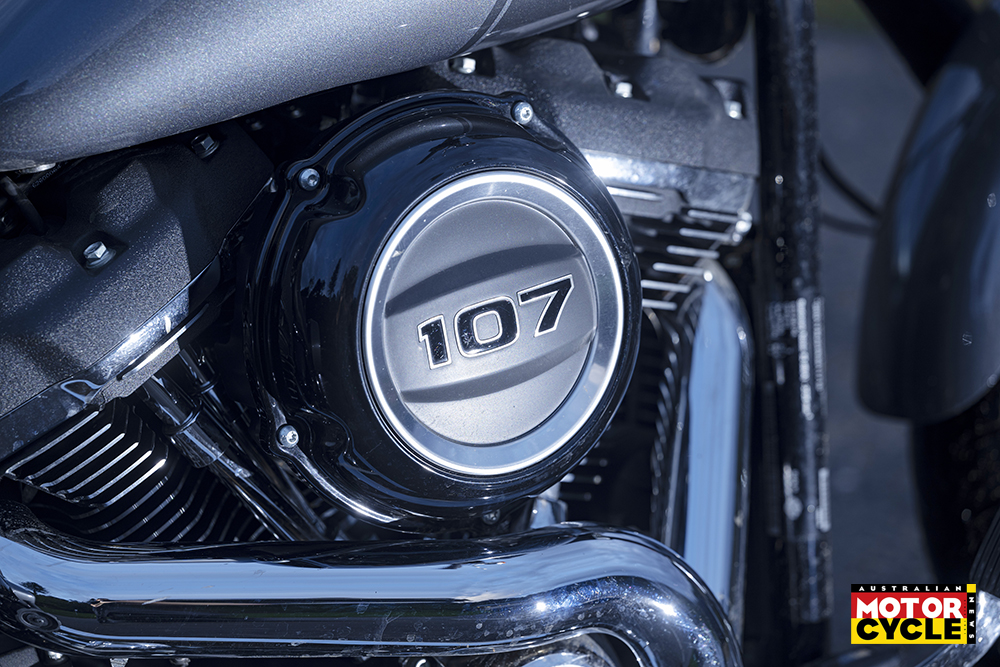 I have concluded that the Glide is lacking in the front braking department in homage to the age-old Harley tradition of showing off your rim – no not that rim, the bikes rims you sicko. Those rims are Mantis contrast-cut alloy wheels and are wrapped in Michelin’s rather sporty Scorcher cruiser rubber. The 130/70-18 front, and 180/70-16 rear do give the Glide a sporty feel and it’s not hindered by oversized rear rubber like the H-D Breakout that tips in like a sand-filled footy sock. I realise looks are subjective, but I reckon the Mantis wheels are a blight on what is otherwise one of the best-looking Harleys in the range.

Performance aside what I think is very cool about the Sport Glide is its chameleon like ability. It comes standard with a set of colour-coded clamshell hard bags, sleek mini batwing style fairing and comfortable ergonomics so it’s easily cable of long hauls in comfort. The riding position is very comfortable – it’s the quintessential feet-forward, stretched arms cruiser position that can sometimes put pressure on your lower back, but the Sports Glide’s seat is well shaped and well padded so there’s no back agro.

Come time for your Saturday night cruise around town and the Sport Glide has the ability to transform into a classic stripped back cruiser. Harley’s quick-release HoldFast latch system allows you to drop the bags and fairing off in moments without tools. It’s quick and easy and is unique to the Sport Glide.

The fairing offers a decent amount of protection from the elements without looking to bulbous and the small screen sends air at your chest, so it doesn’t cause buffeting around your helmet. If you’re after more protection Harley offers a taller screen.

The clamshell hard bags allow you to cram around 50 litres of your junk in them and they even have gas struts fitted for a smooth action and the levers for opening are easily reached while sitting on the bike. 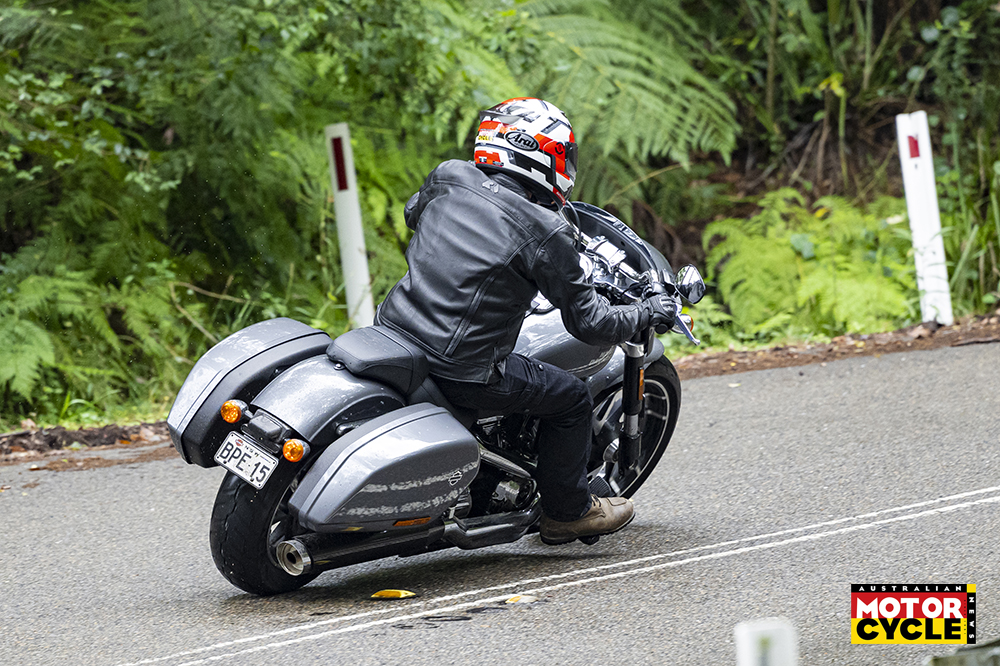 In fine Harley tradition the instruments are mounted on the tank and offer a rudimentary array of information such as a gear indicator, odometer, fuel level, clock, trip, range and tachometer, all of which are displayed in a small LCD panel within the five-inch analogue speedo. When you ride a Harley with tank mounted instruments for the first time or you’re used to riding different models the instrument setup can be a bit tedious in this day and age of hidden speed cameras and the law trying to catch you for doing a few kilometres over. I’d rather be looking at the road rather than looking at the tank constantly.

The tank holds 18.9 litres and with an average fuel guzzle of 5.6l/100km that dropped down to an average of 5.3 out on the open road a tank of juice should get you between 330 and 350 kilometres down the road.

Despite its uniqueness and my fondness for the Sport Glide the future doesn’t look bright. The Sport Glide has been discontinued in the US perhaps a victim of the Motor Companies own Low Rider S which is just a $1000 more expensive and comes with a superior braking package, and the 117ci Milwaukee-Eight and is arguable the best cruiser in Harley’s range now. 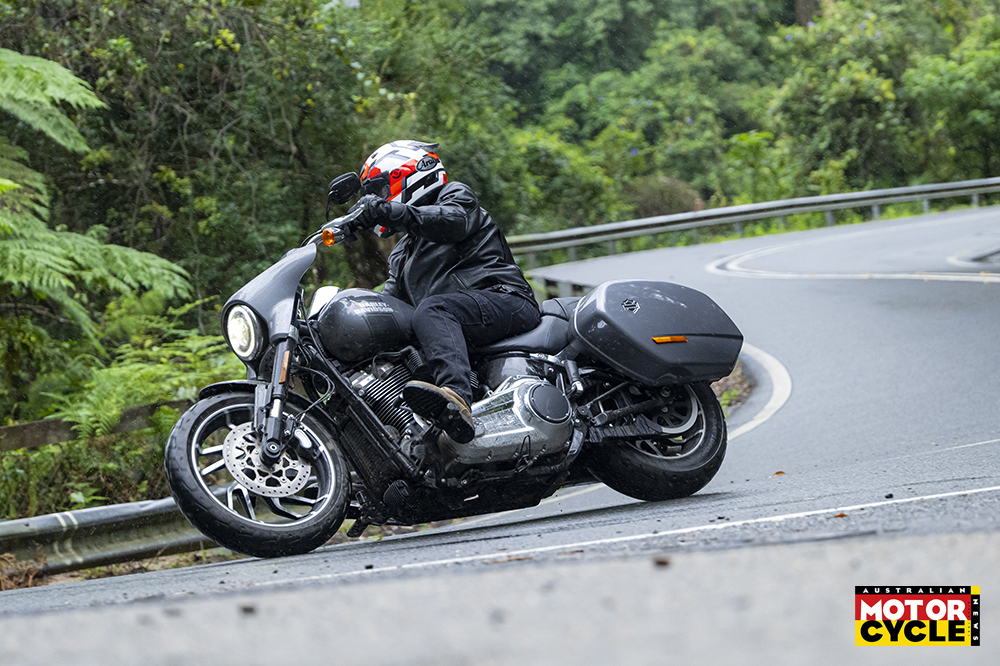 If only Harley gave the Sport Glide some love and upgraded the braking package and engine, then maybe the Glide wouldn’t be on the endangered list.

Or perhaps it still would be, and potential buyers just aren’t as taken with the chameleon characteristics of the Sport Glide as I am. And if that’s the case then perhaps the $29,750 asking price is too much extra moola for a bike that’s very similar to the far cheaper Softail Standard with gimmicky bags and fairing.

It’ll be sad to see the Sport Glide go, and even sadder knowing that with a bit of love from Harley it might have been around for many years to come. 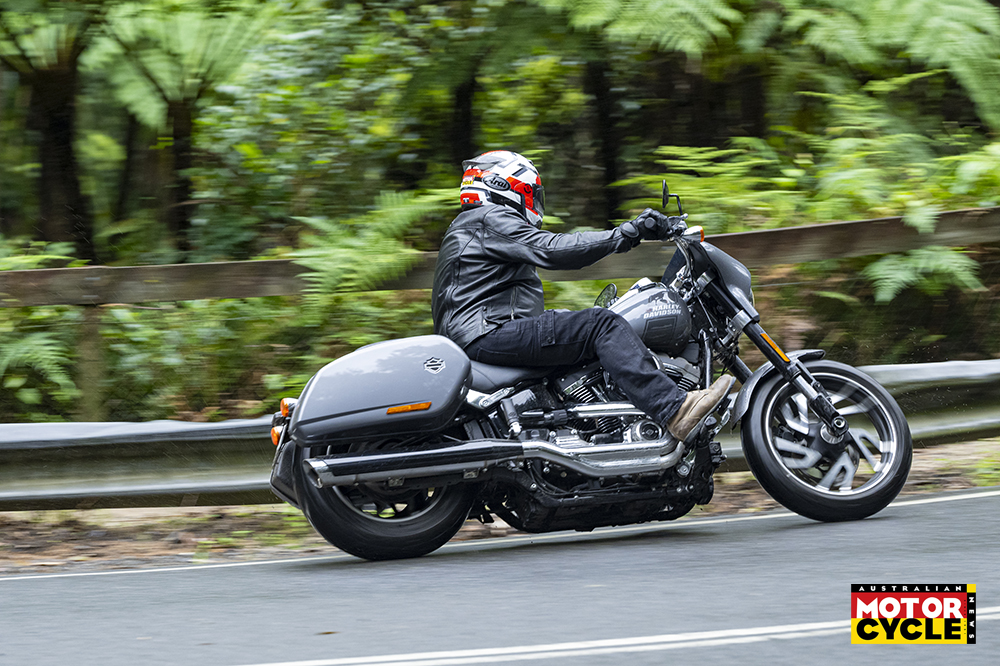 The last couple of Harleys I’ve ridden – Sportster S and Pan America – are equipped with the Firm’s new Revolution Max engine, so it was interesting revisiting the torquey, slow-revving Milwaukee-Eight 107 V-twin.

The Sport Glide’s V-twin makes a claimed 139Nm at 3500rpm, which is significantly more grunt at lower revs than Sportster S’s 127Nm at a relatively high 6000rpm. As the figures suggest, the Sport Glide is happy to lope along in tall gears barely above idle, which was well suited to the crap weather I rode it in for this photo shoot. But crack the throttle in the lower gears and let the 107 rev, and it delivers plenty enough poke up top to have the rear hoop struggling for grip on wet bitumen. 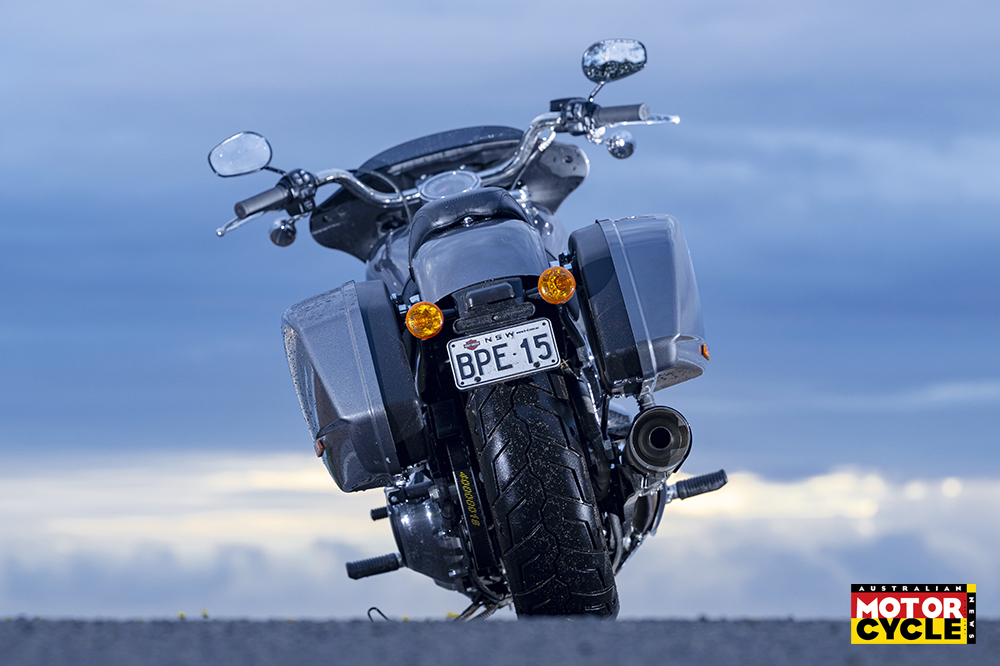 At a hefty 317kg, the Sport Glide is a portly beast, but you’d never know it thanks to the low seat height and the relaxed riding position; it’s easy to manoeuvre at low speeds and it steers predictably at higher speeds. It even tips into corners with minimal effort thanks to the wide ’bar and not-so-wide rubber.

The panniers ain’t huge, but damn they look good; they don’t stick out too far and they have a profile that neatly follows the lines of the rear guard. Likewise, the small fork-mounted batwing fairing and tiny screen offer bugger-all in the way of weather protection, but they are nicely integrated into the front-end and they look trick, so who cares?

Pillions probably won’t think too much of the small perch atop the rear guard, but at least it has one, hey?

Thirty thousand, though? The Sport Glide is bloody nice bike but I reckon that’s a big ask.

Watch 2019 Australian superbike champ, Mike Jones; Suzuki’s Josh Waters and Yamaha’s Dan Falzon to take you on a high-speed jaunt around The Island

While this isn’t an official Bimota project it’s rare to see an unofficial work that’s as convincing as this students’ creation. This electric Bimota concept, dubbed the EB1 (geddit?), is the work of four talented design students at the International School of Design i 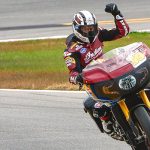 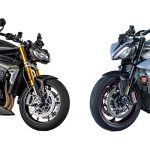 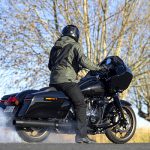