Despite a couple of acres of garish orange and black on the 2021 KTM 1290 Super Adventure S smashing my eyeballs over at Motorcycles R Us, they’d focused on three little words etched into the seat. Ready to Race. 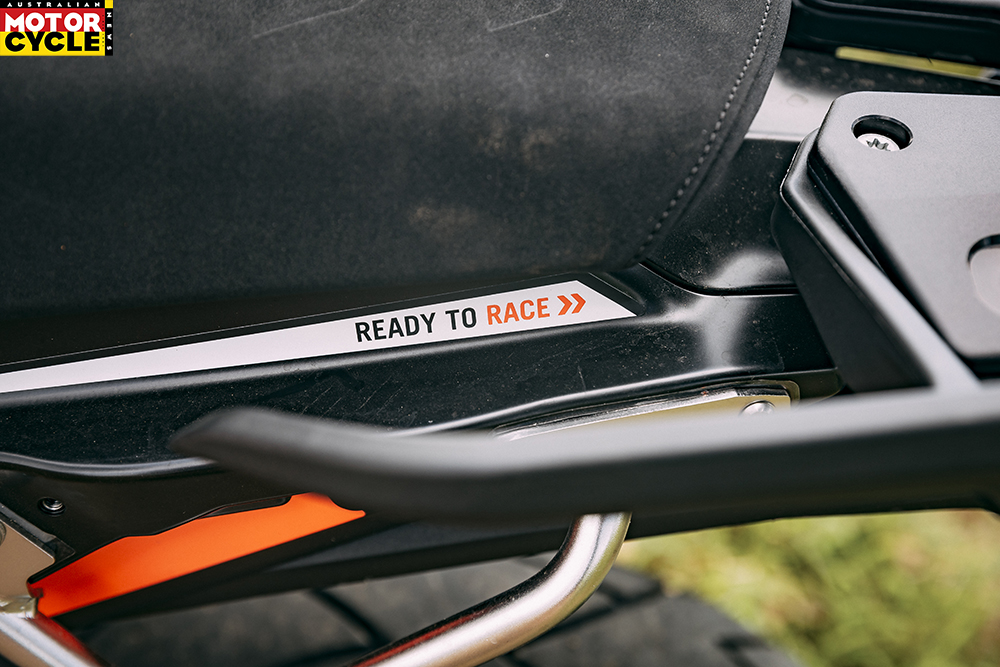 What? Get off the pot! Ready to race? Good grief, they’re kidding, right? I mean, what sort of out of balance, one-handed wrist action came up with that? It’s a bloody chook chaser. Okay, so maybe it’s a mega chooky, but it’s still a trailbike. Well, sort of, you know. In that silly way that so-called adventure bikes are styled like trailbikes even though the bigger they are, the less riders are actually heading bush. And this one, looking more like a Transformer Chainsaw than a motorcycle, looked big. And angry.

Righto, let’s wind the clock back a little. First, I’d ridden across Brisbane to Springwood on a 1960 BMW. Yep, the one I’ve owned since I was 18 about 47 years ago. That’s two ancient roosters looking at this mega spring chicken.

Second, my own ‘adventure bike’ is a carburetted Royal Enfield Himalayan. I’ve warmed it up to make 27 horsepower, enough to shift its 200kg and 100kg rider well within sight of most speed limits. Third, out of all the bikes in the shed – lots, don’t tell the wife – the Himmo’s the newest, by 25 years… 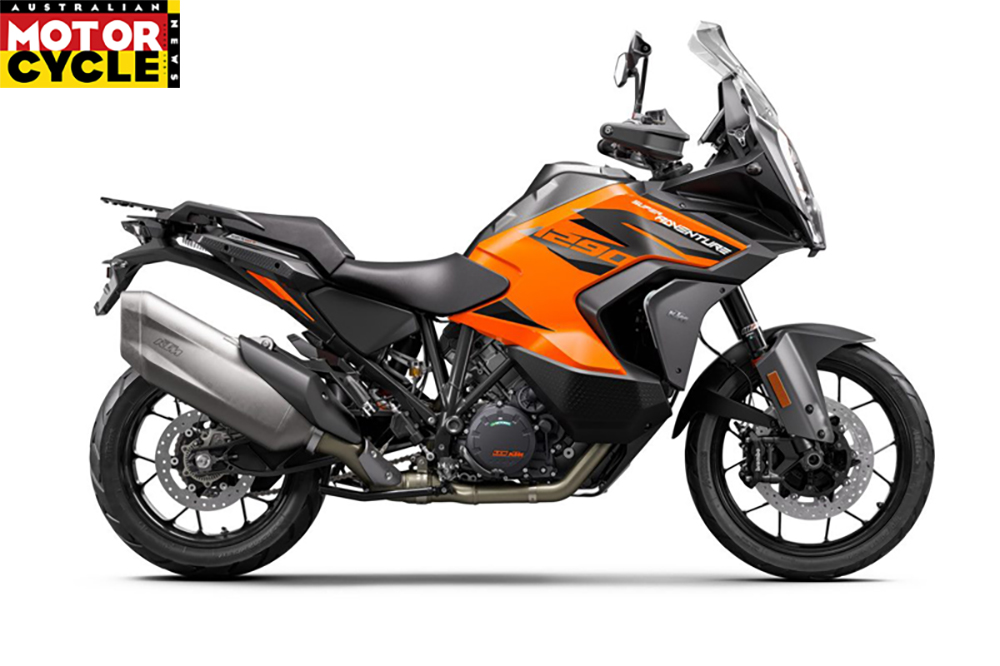 Oh, and fourth, I was scared shitless. Yes, I’d heard about the 160hp pushing 220kg thing. A mere six times the power-to-weight of the unbustable Enfield, and twice as high.

Look, I’ve been testing bikes over 30 years for magazines and the old Bike Show and even for the NSW Police. Err, and not just as a chase dummy. But I’m old with a keg where my abs used to be and hinged below are the legs of a duck. That dang mega chooky looked an awfully long way from the ground. If you’ve got old and broken legs, it can be very disconcerting to be pedalling power on tippy toes. 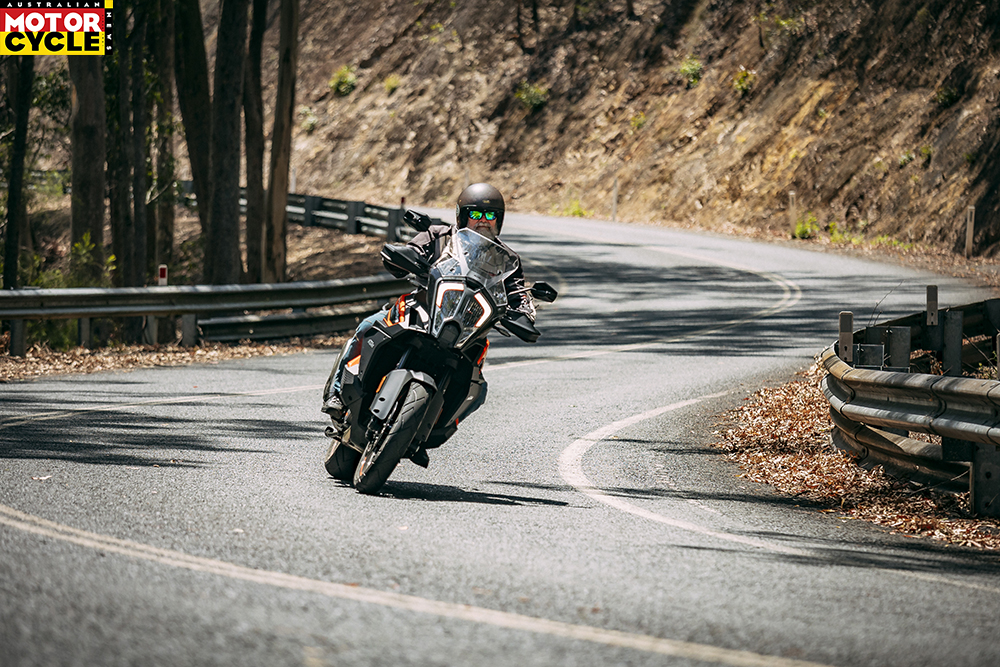 But hey, I’d wanted this. I’d heard all about the 1290 Super Adventure S. I knew that plenty of testers were hailing this bike as a massive leap forward in motorcycle technology. A super-sized 1190 Adventure in more ways than one. Common sense said walk away, but curiosity said ‘have a go, ya mug’. And Deano had talked about it like it was no big thing.

Simple for him to say. He rides them all. 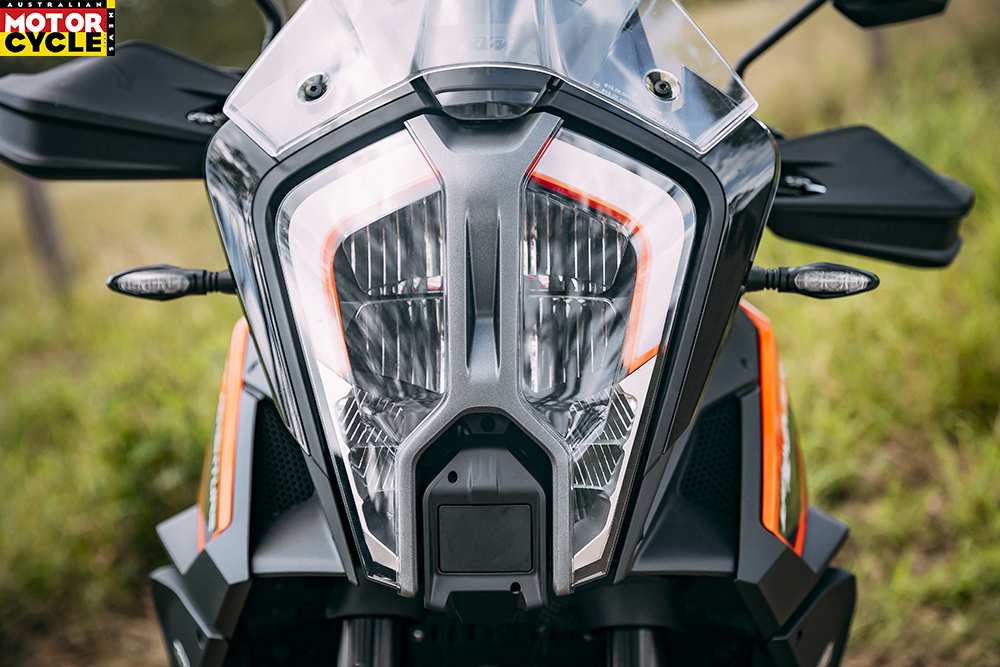 Then Mike dropped a fob into a little glovebox on top of the tank and pushed a button. The seven-inch iPad thingy sitting where the dials used to go lit up and spelled out ‘Ready to Race’. Oh, come on!

That was just the start of the lesson though. There’s massive tech buried under that window. Bosch’s Motorcycle Stability Control (MSC) constantly monitors acceleration, weight transfer, lean angle and braking, makes instant decisions on throttle and braking, and monitors rider input to suit. Suspension damping both ends is optimised automatically and tuneable by the rider. Combined ABS braking on Brembos all around (320mm duals up front and four piston calipers, a 267mm at the rear) is almost ordinary in this package, until you realise that the system detects front lever pressure and applies a bit of back automatically. 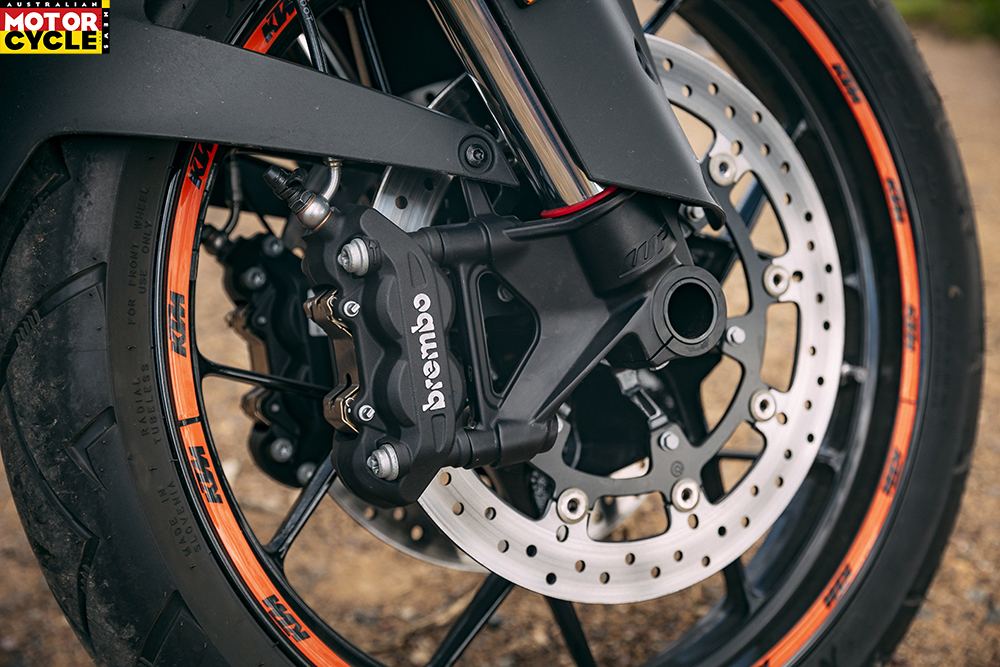 Sheesh, next thing you’ll be telling me it’s got radar and brakes on its own! Oh. Adaptable Cruise Control, eh? And look, by pushing the button on preload adjustment setting, the bike raises and lowers itself through 10 positions, either on the driveway or on the move.

Aha! It might have taken me a week to work out the rest, but I know what preload adjustment is. On most of my bikes, it’s the only thing that’s adjustable, as long as you can find the C-spanner. I made a mental note to myself to set it on zero and climb on near a gutter. 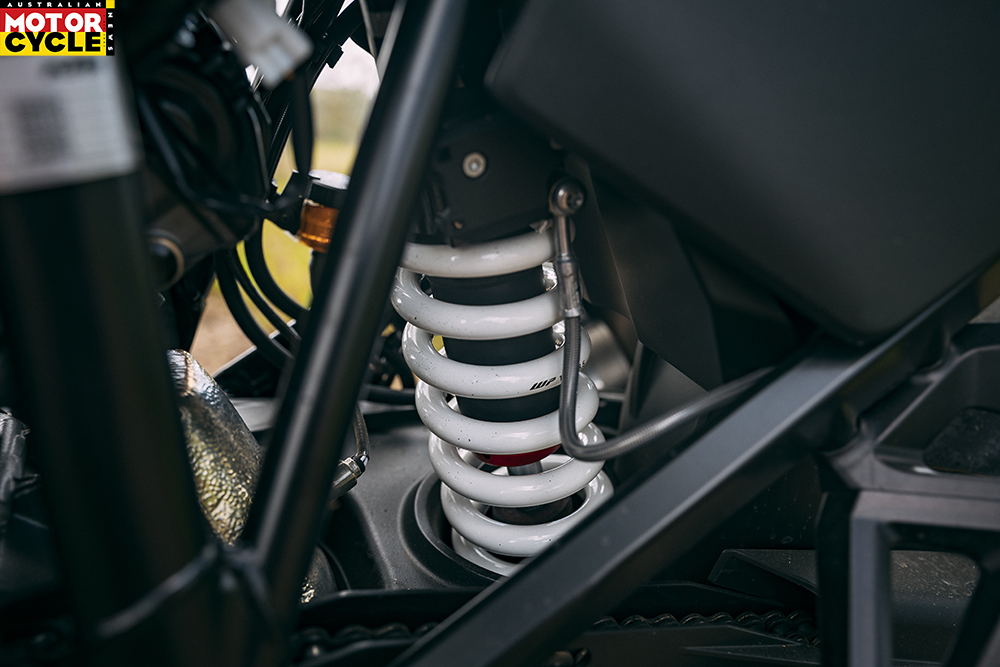 Yep, an amazing array of sophisticated rider aids. All a load of bullshit to my generation, of course, something to give the young bloods excuses to ride slow. “Oh, Barrington, I would have flogged you on that last section if I hadn’t slipped into Off-Road mode.”

Sensing that he’d just held my head under the tech bucket for too long, Mike made one last comment about it being the safest bike on the road and went back to real customers. I hate sarcasm. Safe is a step-thru, mate, wobbling back home on a dirt track from the bottle shop! I grabbed the cuff of my right leg and hoiked it over the seat. 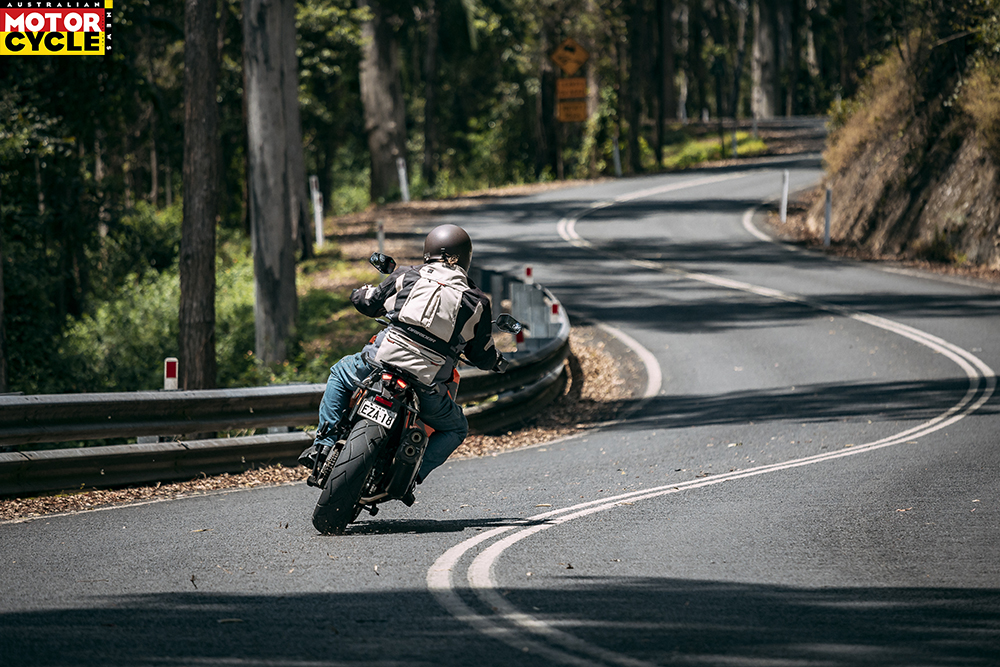 The motor buttoned into life and I cycled through the screen to find preload and comfort. It occurred to me that it was almost intuitive, a button to dive deeper, another to bring you out and one to start again. They should make phones like this. The big screen made it easy, especially given the better-than-TV-like quality of the images. There’s a clarity here that’s not just because you can tilt the thing to get it out of the glare. It makes sense.

Two things were obvious straight away. It didn’t feel as big as it looked. In fact on zero preload I had both feet on the ground, the handlebar – ooh, look, a real one with bolt cups – dropped right to hand and the mirrors offered the best view backwards since the last Premier of Queensland. Moving off with a lovely, light clutch releasing predictable power, I couldn’t believe how stable the big bird felt. 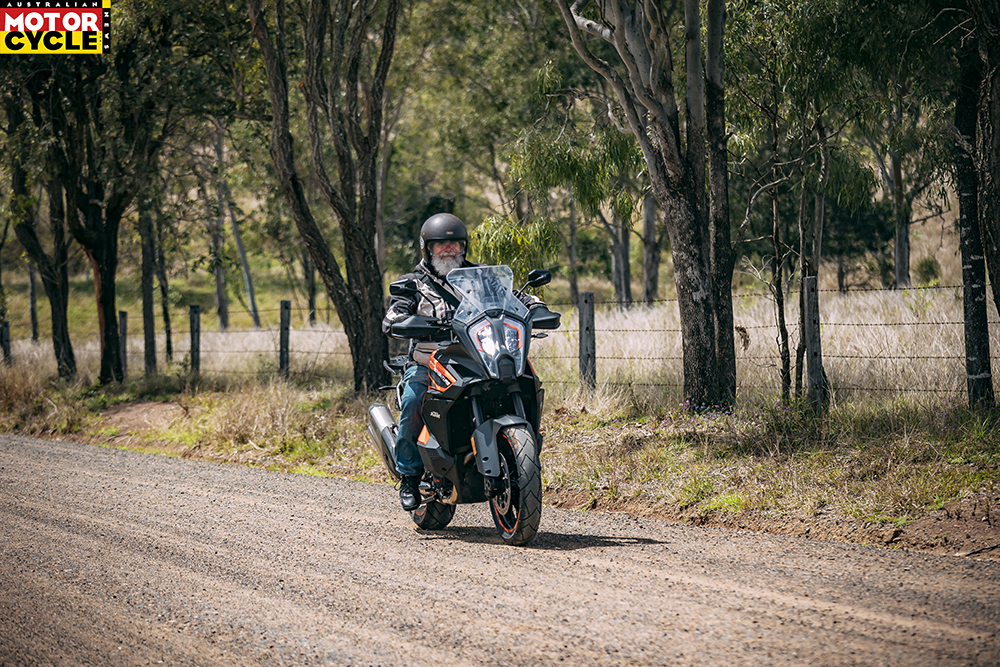 In fact, it didn’t feel big. KTM’s Super Adventure brochure makes lots of claims of the benefits of the new three-cell petrol tank, the lower centre of gravity and the geometry of a shorter frame with longer swingarm. Trust me, they’ve achieved a minor miracle here. Throughout this test it constantly amazed me how stable the 1290 was. With a bit of clutch slipping, you can stroll feet up through a ploughed paddock as easy as if there was an extra wheel out there somewhere. The most dangerous part of any photo shoot is the turn across the road to come back. Not here, mate, just uncompromising ability at low speeds.

Which, of course, translates to stability at speed on the dirt too. There’s a point and squirt ability on the loose stuff that’s best described as amazing. Wow. But I didn’t find that out until day two, somewhere out the back of Kilcoy after my first pass over Mount Glorious. 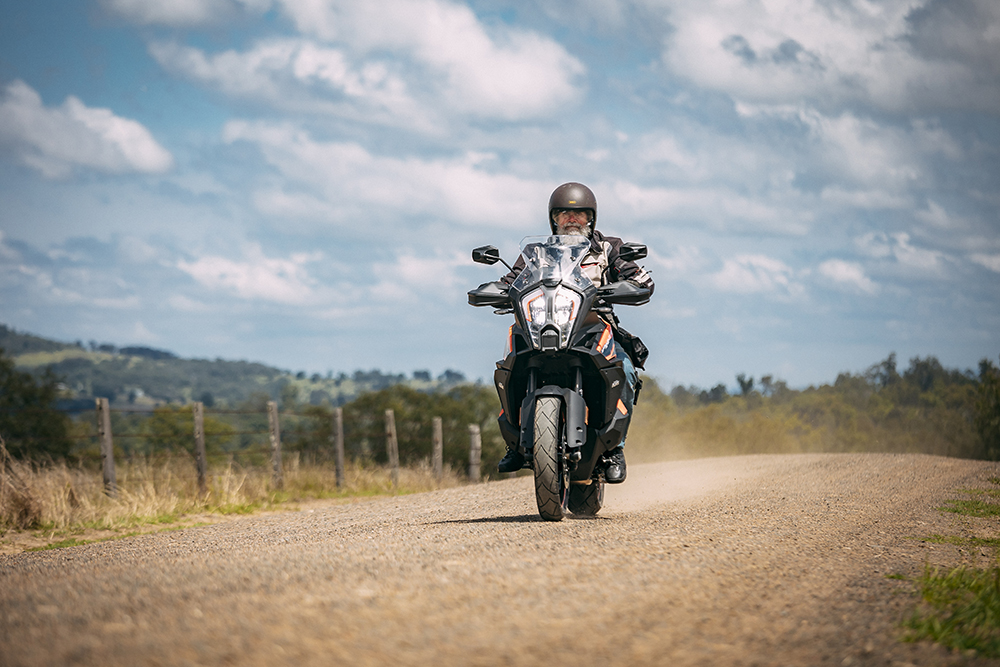 Glorious, for those not lucky enough to live here in God’s Own, is a lovely tight and twisty little race track through the hills west of Brisbane. Actually, it’s mostly zoned at 60km/h now and blue lights are guaranteed on a sunny weekend. That’s probably sensible given it runs through rainforest and there’s usually plenty of wet leaves and dead sticks around, too. It’s also the gateway to a host of sealed and dirt roads that carve up the hinterland. It’s where, for me, the KTM Super Adventure came into its own.

Aha. I see we’ve got all the way to the crux of the matter and still haven’t mentioned the power. Maybe that’s because it’s so controllable, not just with its digital leashes but also because of the predictability of the big V-twin’s output. In the real world. I got just around the corner from Motorcycles R Us before giving the throttle a quick stab. I was in Street mode to get the full 160hp (Rain and Off-road limit you to 100hp – hahaha – with Rain allowing minimal slippage while Off-road allows the back wheel to spin twice as fast as the front), second gear and had to back off almost straight away. Wow. Wow. 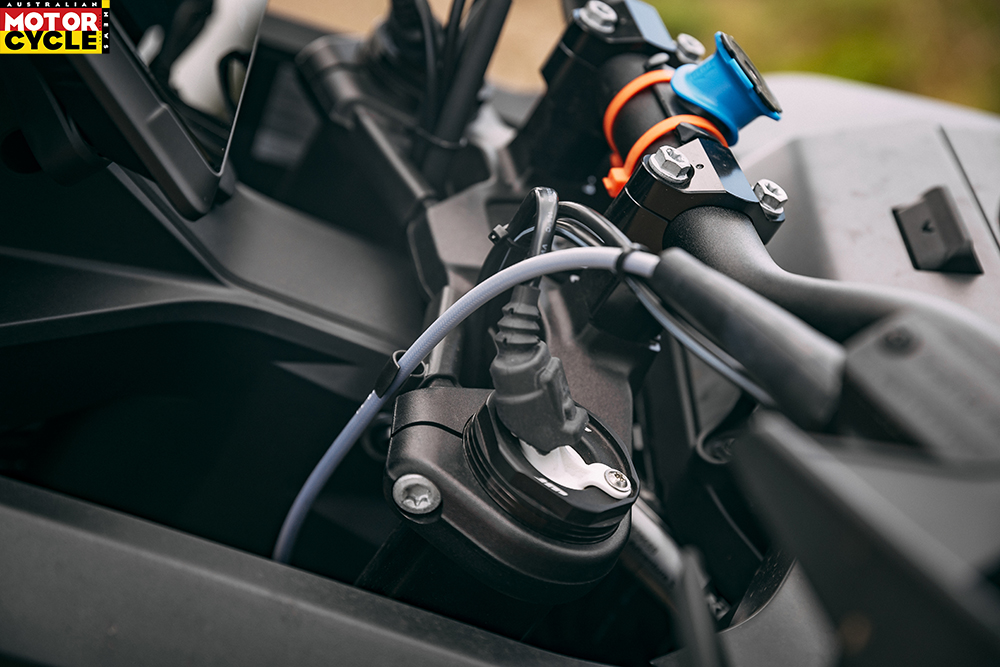 I was to find out later that true insanity existed in Sport mode, where the full 160 horses were unleashed by a much shorter whip. But by that stage, my confidence in the electronics was almost complete. Yes, take a bow KTM, you’ve come up with sheer brilliance here. All the useable power in the world coupled to a rider-assist package that’s like a giant parachute floating above, just waiting to rescue a bit of overcooking.

The result? For a few days I travelled faster and safer on roads I know well than I ever have. That’s probably not that fast by some standards, but it was a personal best. In fact, I reckon the 1290 Super Adventure comes with a magic cachet that’ll make most riders quicker than they’ve ever been. 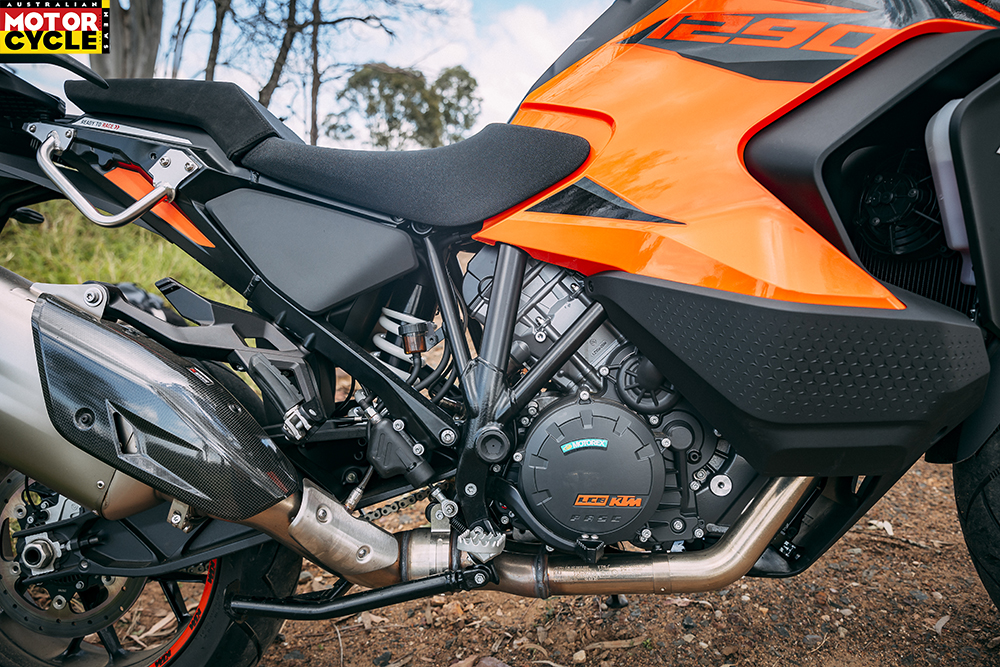 You know that ‘Ready to Race’ thing? They’re not kidding. Bung it in Sports mode, get the suspension sorted to suit and you’ll be going faster at trackdays than ever. I’d happily eat humble pie to prove that.

And Mike’s line about the 1290 being a very safe bike? Well I rode it through some serious downpours, punted fast through piles of dead leaves, slid around on wet clay tracks and trickled in and out of petrol stations full of caravans. When I wasn’t in the right mode, the bike was. That’s the thing about this multi-sensor MSC thingy, it finds sensible wherever it’s hiding. 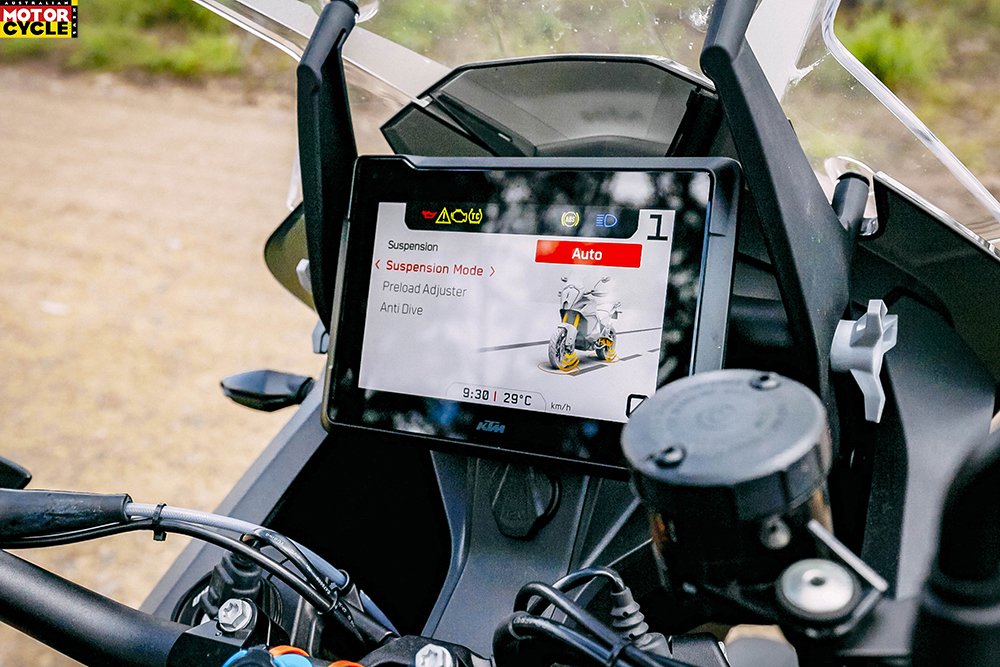 Yes, I did try the adaptable cruise control and yes, it works. I only tried it on the motorway but it was surprising what it did pick up. Apparently they redesigned the headlight to allow for the radar unit, but it’s still got that instantly recognisable KTM grin of defiance. Those in the know will know what just shot past them.

It’s also a brilliant light with a nice, wide spread and plenty of penetration. I’m tempted to say perfect for old eyes but fact is every time I threw a leg over the Super A, I dropped 30 years. 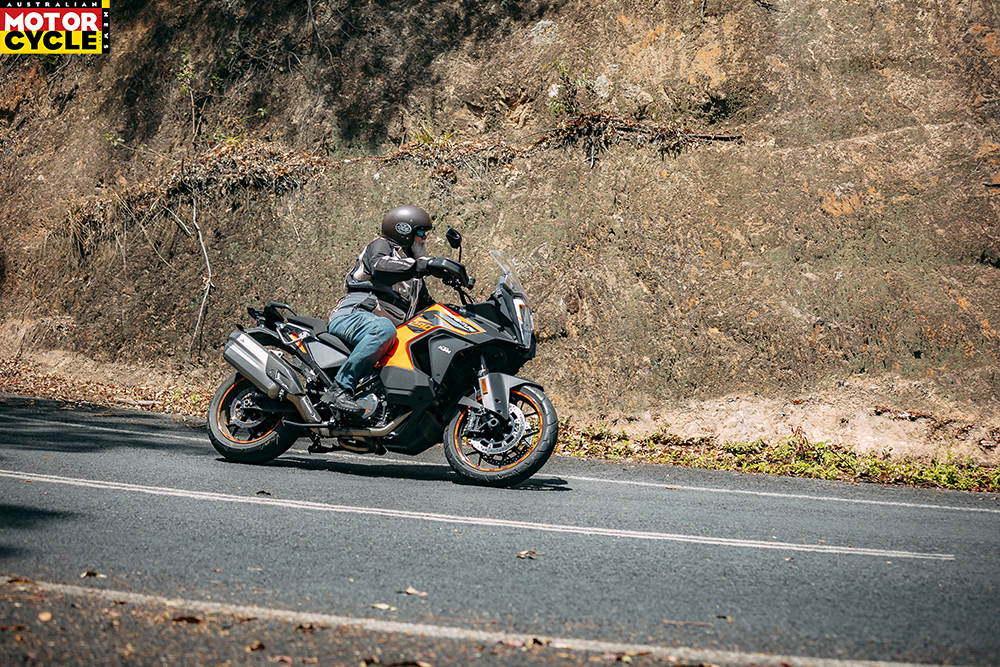 Fortunately, the seat’s comfortable. That’s a good thing because this bike’s so easy to punt hard, that thousand-kilometre days in Comfort mode are just around the next couple of hundred corners. Yep, tourer, racer, off-roader, brilliant city commuter, the Super Adventure’s a bunch of bikes in one. I started out thinking a price over $30K was a bit steep and 800km later realised you were getting a lots of brilliant bikes for the money.

Other stuff? The screen adjusts with a couple of simple knobs through about two inches (50mm) of rise, which means you can sort any helmet buffeting – great design. Similarly, there are two radiators angled under the fairing that do an awesome job of sucking the heat away from the rider. I’m thinking a bare-bones, big-bore V-twin working hard must generate serious heat, but where was it? Even at the lights it was barely noticeable. 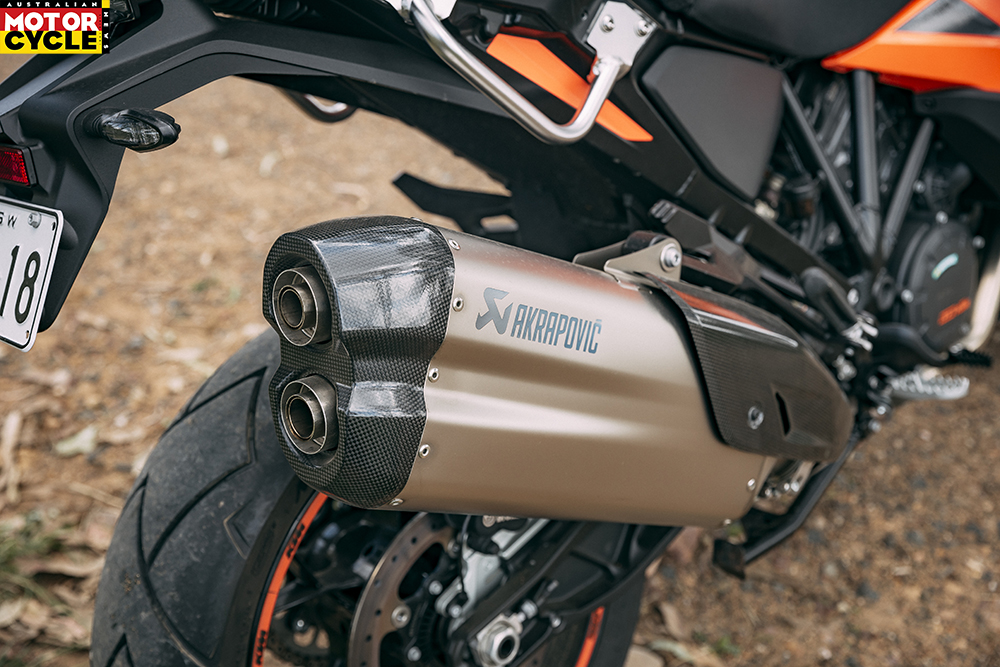 Ah, finally, something that disappointed me. This KTM came with $1795 worth of Akrapovic exhaust modulating what must be one of the wildest sounding motors ever. And I could barely hear it. I’d like to think that’s because we were travelling so fast we left the burble behind but it’s probably just sensible.

Which is a good place to end this test. See, sensible usually translates to boring but that’s definitely not the case here. Thanks KTM, I’ve just experienced a massive leap in motorcycle technology but it left me hanging for more! 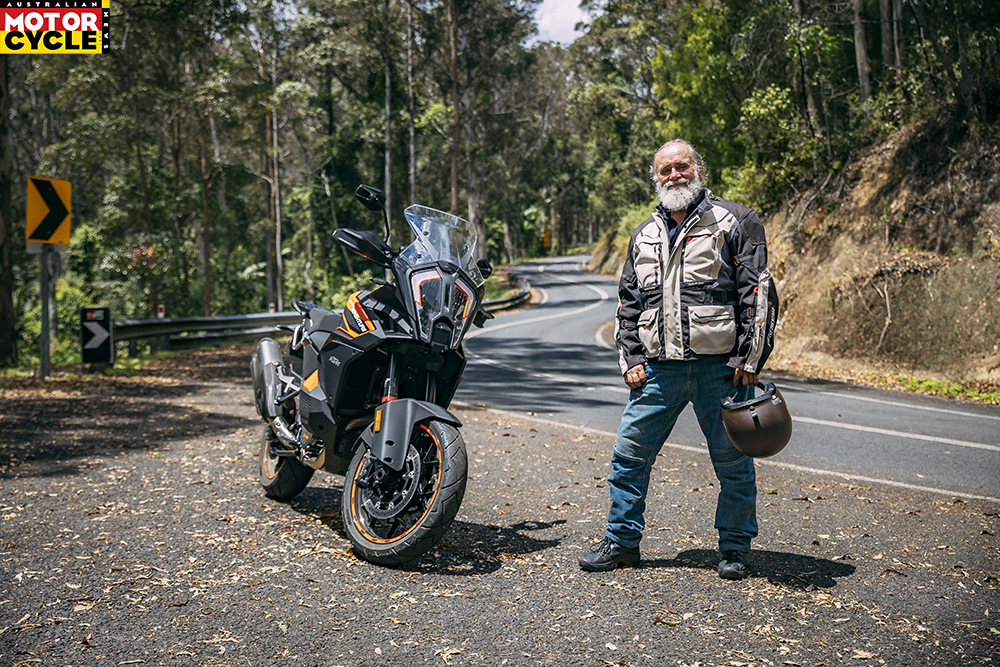